0:04Skip to 0 minutes and 4 secondsPENNY COPELAND: Is this similar to what else you've found on the site?

0:08Skip to 0 minutes and 8 secondsREBECCA WOODS: Yeah, it's very similar to other stuff that's been found across different trenches. But a lot of plaster has come out of a lot of contexts, which I find really interesting to clean because once you get to see the pattern come through, I find that really interesting. So that's nice to find as well. Quite a lot of animal bone. Found a full skeleton of a larger animal, but we're not quite sure what that is yet. So it'll be good to find out what that is.

0:42Skip to 0 minutes and 42 secondsPENNY COPELAND: I think it's a good selection. This trench has a different selection of finds to the other trench on the site which has most of the plaster coming up. This one has much more burnt material, so it's all different. And as I said, this domestic ware is different from other things that we've found on the rest of the site. OK. And Luke? How does it compare to other things you've found?

1:12Skip to 1 minute and 12 secondsLUKE MILNER: Well, this piece of tessera was slightly unusual, because the majority of the ones we've been finding in my trench have all been much larger, stained tesserae, which are indicative of an outside area, which is why people think it might have fallen through from above. Which is why they're a bit unsure about these tiny glass ones, because we've only found one other one. So only two have come out so people are a bit unsure as to where they're coming from. Which is why we need to keep taking up the layer, because it's all just been very large, stained ones before that.

1:43Skip to 1 minute and 43 secondsPENNY COPELAND: Now you've both been involved in taking finds from the site and processing them afterwards. So what sort of things have you been processing today?

1:54Skip to 1 minute and 54 secondsREBECCA WOODS: A lot of coin processing. In one of the trenches we found a whole load of coins, so basically going through cataloguing their size, their shape, if there's any unusual markings on them. A lot of very small coins, though, so it's very difficult to actually find any distinguishable patterns on it at this point in time. But hopefully when they get cleaned probably, we'll be able to see more about them. 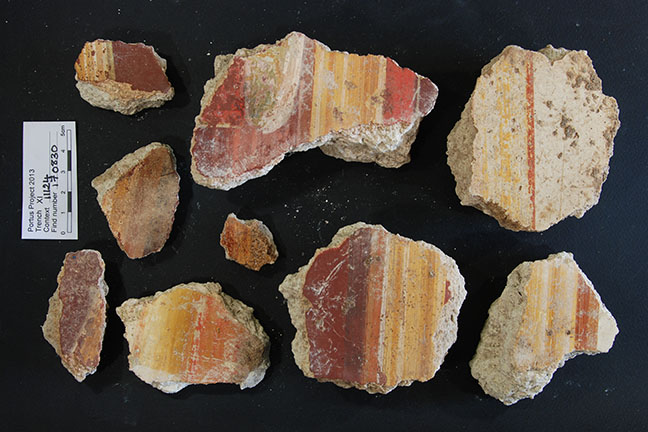 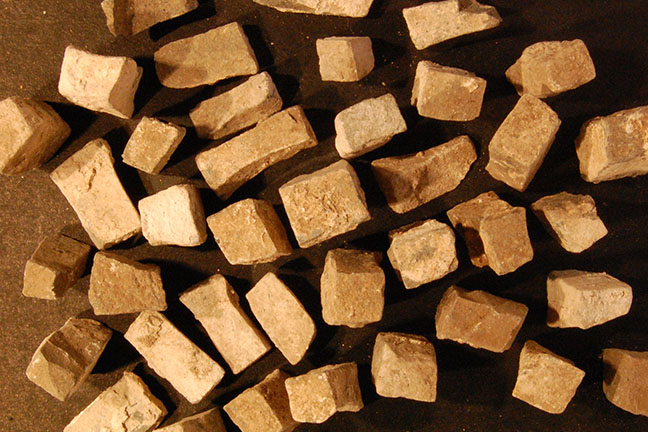 A group of tesserae - Hembo Pagi © University of Southampton