0:06Skip to 0 minutes and 6 seconds SIMON KEAY: This is a Byzantine coin. And you can see details, particularly characteristic that little column, those two stars. Is what’s called a decanummus. And this coin dates to about the 540’s A.D. In other words, to the mid sixth century. And that is a time just during coming towards the end of the Gothic wars when the Byzantines under Belisarius were in the process of trying to retain Portus and at the same time fighting the Ostrogoths, who were trying to take control of Rome. And so it kind of illustrates very nicely the kind of historical process going on.

0:54Skip to 0 minutes and 54 seconds And again, however, that coin, all it tells us is that the layer in which it was found was created sometime after the date that coin was issued. So 540’s, mid sixth century A.D.

1:09Skip to 1 minute and 9 seconds HOLLY WALKER: And then this tiny little coin, is the size difference like in our money? It means a different thing? Or is it because it’s from a different time or it’s just corroded?

1:19Skip to 1 minute and 19 seconds SIMON KEAY: No, it’s again it’s a Roman coin again. This is a Roman one, probably some time in the fifth century. That was a time when the entire Roman monetary system was beginning to break down. And there was no intrinsic value to any of these coins. They were assigned an notional value. And the coins themselves were getting smaller and smaller and just assigned relative values. And it becomes very difficult to either date it or say very much about it, except it is Roman. It’s probably fourth or fifth century, something like that. And, in fact, just the other day, I think you probably were there.

2:01Skip to 2 minutes and 1 second HOLLY WALKER: We found the coins.

2:03Skip to 2 minutes and 3 seconds SIMON KEAY: We found a hoard of a hundred of them. And that must have been pretty spectacular.

2:11Skip to 2 minutes and 11 seconds But they are evidence of commercial activity going on the site.

This decanummus is a very small bronze coin dating to the 540s AD, probably minted at Rome. It comes from a hoard of coins found in the demolition debris of the Palazzo Imperiale.

The obverse or heads side is not very clear but would have represented a frontal view of the Emperor Justinian (AD 527-565). On the reverse the “I” between the stars that looks like a column is in fact a Greek numbering symbol which indicates that it was worth ten nummi, the nummus being a very small bronze coin that partnered the other denomination in the early Byzantine coinage system, the gold solidus. Its value, therefore, needs to be calculated in terms of a fraction of the solidus which weighed c. 4.3gm.

This coin was minted towards the end of the Gothic Wars (AD 536-552), the name given to Justinian’s efforts to reconquer Italy and other parts of the western Mediterranean for the Eastern Roman Empire. As Simon mentioned earlier this week, it reminds us of how central Portus was to the conflict so vividly described by the Byzantine writer Procopius, and the key role played by his General Belisarius.

The coin was probably lost at some in the later 6th c. AD in the context of commercial activity at the port; the smaller, second, coin gives us further evidence of continuing commercial activity. The reason for the hoarding of the coins is unclear, but could have been related to the lack of security felt by those living and working at Portus during the Gothic Wars or during its aftermath. 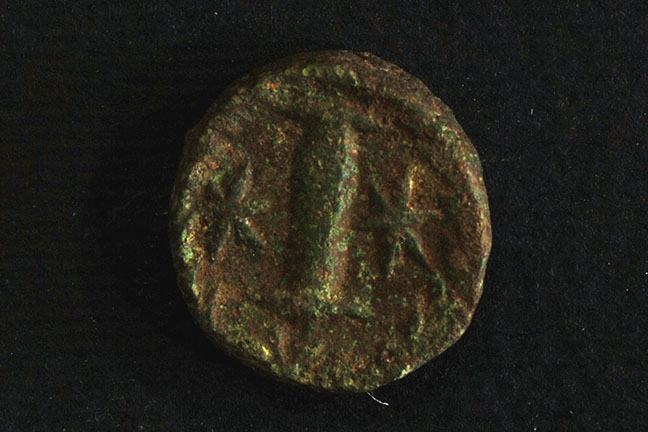