0:05Skip to 0 minutes and 5 seconds SIMON KEAY: I’d like to introduce Fabrizio Felici, who’s the excavation manager of the Portus Project. Ciao, Fabrizio. So, how is the excavation going today? Are you happy?

0:19Skip to 0 minutes and 19 seconds SIMON KEAY: Good. And tell me a little bit, briefly. What’s been going on today?

0:26Skip to 0 minutes and 26 seconds FABRIZIO FELICI: We are excavating on the upper part of the Trajanic structure, in particular in the upper latrine and in the peristilio.

0:40Skip to 0 minutes and 40 seconds SIMON KEAY: And room nine. Yes, that’s right. And is there anything in particular that we found today that’s worthy of special mention, do you think?

1:13Skip to 1 minute and 13 seconds SIMON KEAY: So that’s really interesting, because that means we’ve got a hoard of late Roman bronze coins found inside what was a very decorated latrine with marble slabs and marble floor. So as it is at the moment, we’re standing in what’s a key part of the Palazzo Imperiale, the so-called Imperial Palace. And as you know, this is an amazingly big structure. It covers some three hectares. It’s on three storeys, and we’re excavating here going all the way back there and up to here. We’re excavating just about 70 metres long of it. So it’s a tiny piece of a big building within a massive port. So, I think for us as archaeologists, that creates real kind of methodological challenges.

2:14Skip to 2 minutes and 14 seconds SIMON KEAY: I mean, the first thing I guess to think about is what have you found being the most difficult kind of issue to deal with in the excavation?

2:26Skip to 2 minutes and 26 seconds FABRIZIO FELICI: To recognise the upper levels from the rubble levels, with some problem of distinction for the Middle Age fragmentation of the area.

2:40Skip to 2 minutes and 40 seconds SIMON KEAY: Right But I think one of the other difficulties we have, over there, for example, is dealing with what seems to be either deliberate demolition of the building. One guesses it’s in the seventh century or the sixth century, after the Gothic wars. Or whether or not the building has collapsed through old age. Whether, in fact, there may have been an earthquake. And how do we– I mean, this is a difficult problem to resolve.

3:12Skip to 3 minutes and 12 seconds FABRIZIO FELICI: We are doing some progress in this direction, because we have found that some collapsed wall covered the destruction of the remains of the part undemolished. And they are collapsed, not under the flooring, like in an earthquake, but under a part of demolition. So probably this is an intentional demolition.

3:47Skip to 3 minutes and 47 seconds SIMON KEAY: Yes. And that again, clearly if the building is demolished, someone must have been demolishing it. So there is a central authority that is overseeing this process. And one imagines, if it’s the sixth century, that it’s during the Byzantine occupation. After winning the Gothic wars, the Byzantines perhaps feel that this structure no longer serves a purpose. Or perhaps is in some way a threat, so they neutralise it by destroying it systematically.

In the background behind Fabrizio there is view into the basement level of the Palazzo Imperiale, the c. 3 Hectare and three storey administrative and residential complex at the heart of the port.

Our work is focusing upon the northern range of the building, of which only the basement and first floor still survives. The first floor rooms were arranged around a central rectangular peristyle, or open-space defined by columns, that looked out northwards over the Claudian basin. An adjacent room was a latrine from which came the hoard of coins; this is the same hoard that I referred to last week when we were discussing the later period coins with Holly and Tom.

The central pool of the peristyle incorporated a combined light-well and rectangular cistern at ground floor level, and on to these opened a series of vaulted rooms. The laser scan produced by James Miles you saw in week four took you on a journey into this dark space. But it is important to remember that in antiquity this would have been flooded with sunshine from the lightwell above.

As Fabrizio intimates in his chat, the methodological challenges of excavating this complex have been considerable – excavating the basement and the first floor at the same time was one difficulty, while distinguishing rubble from the second floor amongst the standing walls of the first floor was another. Furthermore, dating the demolition which generated the rubble was also difficult, but we currently think that it probably happened at some time after the Gothic Wars in the mid to later 6th c. AD.

The CGI reconstruction produced by Ian Atkins that you see was based on the excavation of a 5th c. AD imperial palace elsewhere, but last year we were finding similarly colourful and ornate marble fragments and other decoration.

Next we will look at how the parts of the Imperial Palace complex fit together. 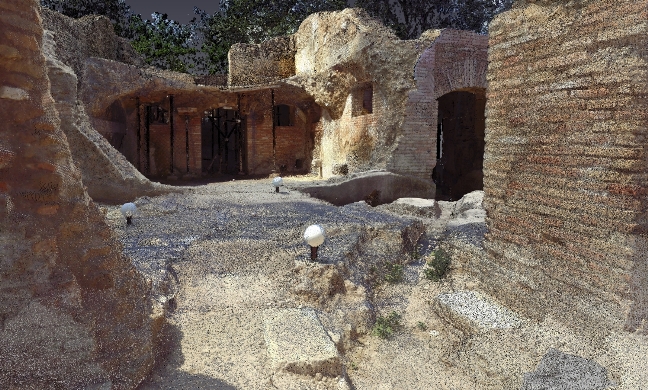