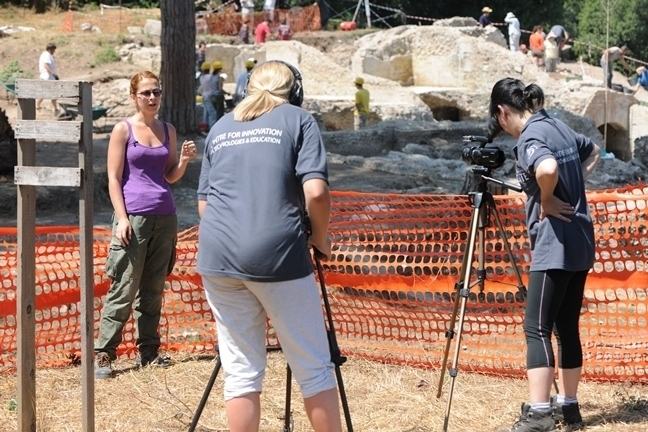 Dragana being filmed in front of the Imperial Palace excavations

If you want to ask us new questions then the easiest way is to post comments on this page. General questions will where possible be addressed through examples drawn from the Imperial Palace. More specific questions will be explored in the most appropriate place on site.

As well as comparing notes between ourselves regarding common topics of conversation and particular areas of interest we try to employ (predictably by now!) some digital strategies to help us to find topics that might be particularly helpful for us to elaborate upon this week. For example, we have previously analysed the comments in order to find out what questions posed by you were most “liked” each week. We also looked at the most liked comments within the steps each week that were most popular, in terms of number of comments. We also identified popular questions raised at any point in the various runs of this course about the buildings and finds of each week, and also what questions were posed at the ends of the week. We also looked at the quiz questions which proved most difficult to answer. You can see the videos responding to these that were recorded earlier this year.

We also shot some additional videos at Portus during the 2014 Field Season that aim to answer some of the questions raised in the first run of the course. These are linked at the bottom of this step as they are edited and uploaded to YouTube. Hopefully they are also of relevance to you.

Simon also added a summary of the excavation results of the 2014 Portus Field School at the bottom of this step.

Please keep your questions coming – although we are not currently working on site we can still find additional materials for you from our archives.

You can see additional videos on our Portus Vimeo channel, and additional blog posts. If you haven’t already then have a look at the course blog. Some of our colleagues added additional posts drawn from their own areas of expertise, including Sonia’s post about osteoarchaeology and ethics and Dave’s post about maritime routes. You can search through the blog posts by week:

Photographs are available as ever on Flickr in the Week 6 collection and remember that many of our photos have a location attached so you can move around the site by looking at the Flickr map.

The 2014 season at Portus proved to be a great success. We had decided to build upon the results of earlier years and to focus our work upon the Shipyard (Building 5) in Area D and the northern range of the Palazzo Imperiale in Area K.

One of the major challenges to our understanding of the former lies in the fact that the floor surfaces belonging to the initial Trajanic building are deeply buried below later structures. We needed to access these in order to better understand how ships might have been supported within the building and subsequently moved out of its southern façade into the waters of the Trajanic basin. A sondage excavated in the narrow bay NB4 in 2012 provided tantalizing clues relating to the first of these questions, such as post-holes cut into a cocciopesto surface and a number of bronze tacks and iron nails; but this excavation was too small to answer our questions. So in 2014, we excavated a wide trench from west to east right across the width of NB4 to get a clearer sense of the nature of the Trajanic floor. The results were fascinating, revealing evidence for a gently raised spine running from north to south down the centre of the bay, which we guess may have been to support the keel of ships sheltered or built in here. This would appear to date to the immediately post-Trajanic period. In addition to this, there was good evidence that there were lines of stakeholes running down each side of the bay from north to south, which we think could have helped support the hull of the ship. Other finds included a depression in which pitch appears to have been mixed, and many bronze tacks and nails of different kinds.

In terms of the northern range of the Palazzo Imperiale, our efforts were concentrated upon further understanding the sequences of occupation in two of the rooms on the ground and two on the first floor, as well as sampling areas on the northern and southern sides of the building. With respect to the former, Building 3, careful excavation succeeded in uncovering a stretch of the opus spicatum floor surface and several pier bases, thereby helping confirm our earlier hypotheses about the layout of the room. It also revealed traces of the industrial activity that preceded the final collapse of the overlying first and second floor vaults and floors during the Byzantine period. Immediately to the west of this, excavation of the passage that sloped down from the south side of the northern range of the Palazzo Imperiale down to its north side, revealed a small structure of uncertain function that was built against the outer wall of Building 3 in the late antique period.

Immediately to the south-west of this passage excavation and outside the Palazzo Imperiale itself, a sondage confirmed the results of an earlier geophysical survey that had suggested that a passage ran along its south side; however it also showed that it had a decorated mosaic floor.

The three other areas of excavation lay along the northern façade of the complex, overlooking the Claudian basin. In two rooms we found new evidence for a very rich phase of decoration comprising marble opus sectile flooring and dating to the late antique period; this further confirms earlier evidence that the complex underwent a major phase of rebuilding in the later 4th and 5th c AD. Finally, excavation along the façade of the Palazzo Imperiale revealed important details about the concrete quay that defined the south side of the Claudian basin.