This content is taken from the University of Southampton's online course, Archaeology of Portus: Exploring the Lost Harbour of Ancient Rome. Join the course to learn more.
View course
5.3

0:05Skip to 0 minutes and 5 secondsSIMON KEAY: In the course of the third century and into the fourth century, we have ample references in the classical sources about traffic coming into Portus and regulations to ensure its smooth running. And right the way through until the very end of the fifth century, perhaps the 470's and the 480's-- a very interesting time because, of course, that's the time when the Roman Empire ceased to exist as a political entity. And we see, at that stage, Portus beginning to lose its drive. We see a retreat of the port. Areas between the hexagonal basin and the Tiber are abandoned. And we see, instead, attention focused primarily on the buildings around the hexagonal basin.

0:56Skip to 0 minutes and 56 secondsAnd indeed, this is expressed very eloquently by the construction of very substantial defences around the hexagonal basin. And these still survive today. And indeed, we've been excavating parts of them. And from that to that particular event may well have taken place in the reign of the last Roman emperor, Romulus Augustulus, although it's probably unlikely. It could've been during the brief reign of the Scirian General Odovacar who replaced him. Or more likely, during the reign of the Ostrogothic king Theoderic who ruled from the late fifth century into the sixth century. After that, we know that Portus still played a commercial role.

1:46Skip to 1 minute and 46 secondsIt was the scene of intense conflicts and combats between the Byzantine troops of the Emperor Justinian led by Count Belisarius and the Ostrogoths, as Belisarius was trying to reclaim Rome. And after that, once the Byzantines have finally established control, we see Portus continuing in an ever-diminishing capacity, right the way through until the seventh, the eighth century. And, indeed right the way through to the 11th century, the Episcopio, a large ecclesiastical complex about a kilometre to the south, being the prime focus of that.

Later Fifth to Seventh Century Use of the Port

I mentioned that Odovacer, the Scirian general of Germanic origin, would have been the ruler of Rome when Portus gained its defences in the last quarter of the 5th c. AD. He deposed the last western Roman Emperor, Romulus Augustulus, in AD 476, and was recognized as the King of Italy by the eastern Roman (Byzantine) Emperor Zeno.

Belisarius was at the heart of what I described at the end of the last video – the recapture of much of Italy by the Emperor Justinian that is so clearly described by the Byzantine court historian Procopius – and it is fascinating to visualize at the site the battles that he tells us took place to gain control of the port from the Ostrogoths.

If you look for evidence of the defences then the Antemurale is a key place. You will remember this sea frontage from the first week of the course. The small warehouses and the Portico di Claudio on the eastern edge of the Claudian basin were incorporated into the defensive wall circuit that was built to surround the core areas of the port (including the Trajanic basin, Molo della Lanterna and Darsena) around AD 470-80.

You can still see stretches of the opus testaceum wall near the entrance to the site today, with towers and even a doorway, and it is immediately clear how effective this would have been in protecting the Grandi Magazzini di Traiano warehouses that lay behind the fortification to the east.

Excavation and analysis of the Antemurale was conducted by Lidia Paroli and the Soprintendenza Speciale per i Beni Archeologici di Roma in the 1990s-2000s. We have also uncovered remains of the same defensive wall as it runs along the northern side of Building 5 and then turns north and westward to ensure that the whole of the Palazzo Imperiale was incorporated within the defences. There is a very fine surviving gateway in the wall, the Arco di Santa Maria, in the Oasi di Porto on the south-eastern side of the Trajanic basin. 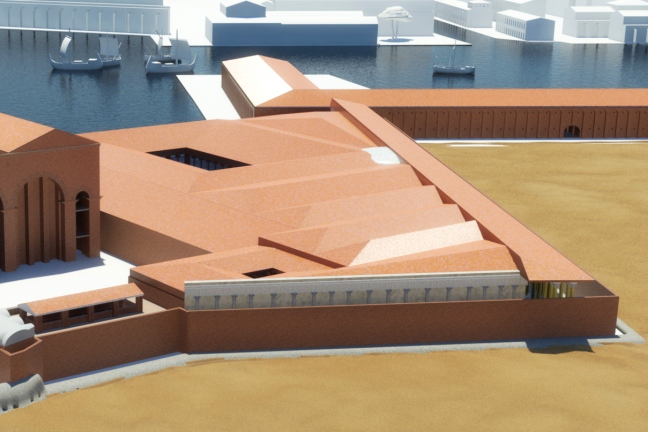