This content is taken from the University of Southampton's online course, Archaeology of Portus: Exploring the Lost Harbour of Ancient Rome. Join the course to learn more.
View course
5.5 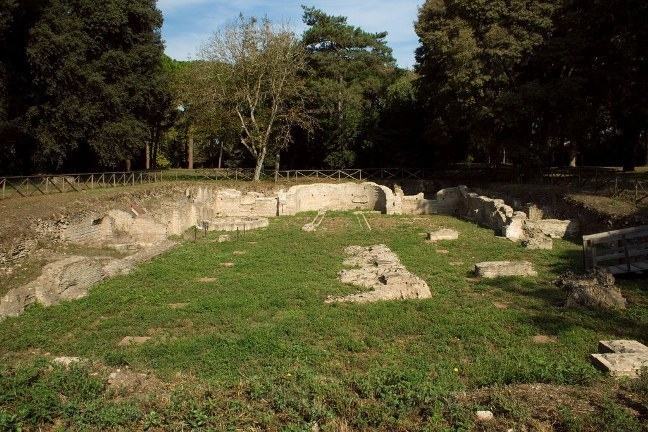 Basilica Portuense as it appears today

The Basilica Portuense lay in key part of the port, on an isthmus of land between the Canale di Imbocco al Porto di Traiano, the Trajanic basin and the Canale Traverso. It was originally discovered during excavations at Portus by the Duke Alessandro Torlonia in 1865, and initially identified as the guest house (xenodochio) that the Senator Pammachius is recorded as having built in AD 395.

Reality, however, is very different. The site was the object of an important series of excavations by Lidia Paroli and Mauro Maiorano between 1991 and 2007. These provide us with a fascinating archaeological sequence that stretches between the establishment of the port in the 1st c. AD and the final abandonment of the Basilica in the first half of the 13th c. AD.

The excavations show that prior to the establishment of Christianity as a state-recognized religion of the Roman Empire in AD 313, the site that was later covered by the Basilica was occupied by commercial buildings (some of which had mosaic floors) at the junction of major roads. These became increasingly hemmed in as the buildings developed in the course of the 2nd and 3rd c. AD – an index of the dynamic commercial life unfolding at the port. Furthermore in the early to middle 4th c. AD, the walls from many of these buildings were incorporated into a large private residence (domus) with mosaic floors, similar to buildings known from Ostia and Rome.

The significant change came some time in the later 4th c. AD and early 5th c. AD, when this residence was converted into an early Christian church (basilica) c. 37m long by c. 20m wide. It comprised a large hall oriented from north to south and consisting of a nave and two flanking aisles with geometric and figured mosaic floors; it was approached through an east-west hall. This building was almost certainly under the jurisdiction of the Bishop of Portus – an individual who is first attested in AD 314. One of our masters students worked with the researchers studying the Basilica in order to produce some tentative graphical reconstructions. 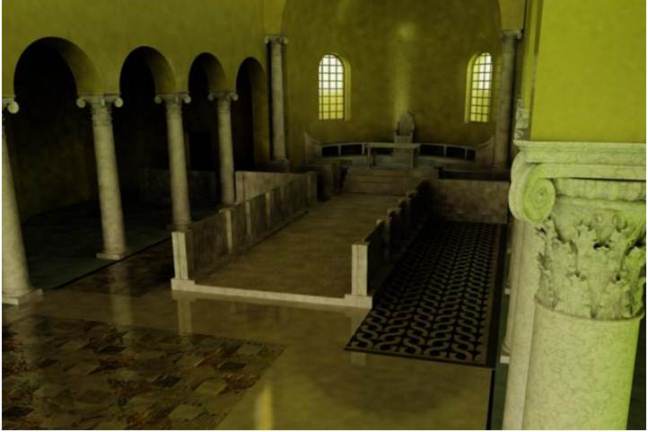 The basilica finally began to take on a more elaborate plan of similar dimensions in the course of the early to late 5th c. AD. A semi-circular apse and new geometric mosaic floors were added to the northern end of the church, giving it the internal appearance of contemporary churches in Rome, like Santa Sabina and San Clemente. 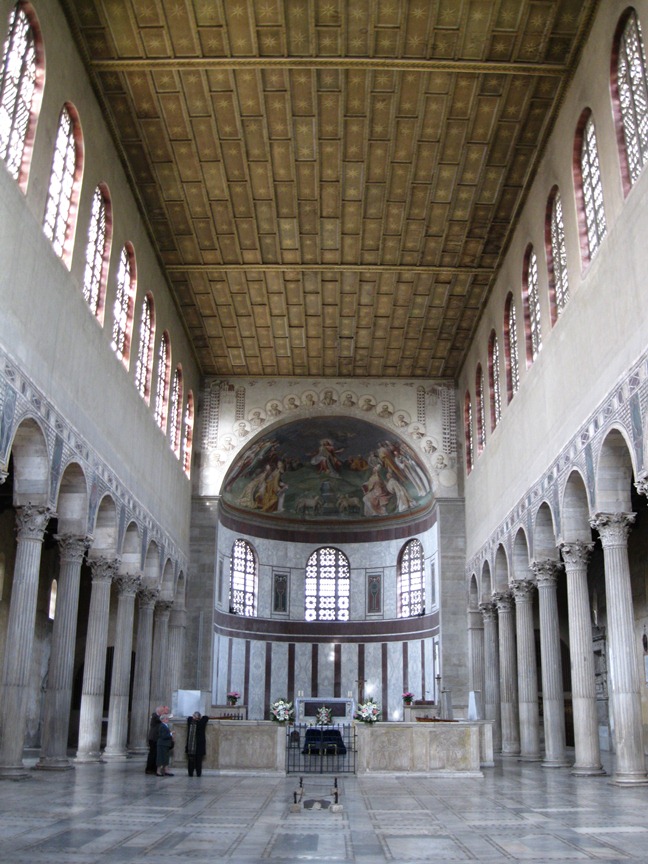 Careful excavation revealed further changes to the layout and decoration of the basilica following the conclusion of the Gothic Wars in the middle of the 6th c. AD – by which time it lay at the heart of the greatly reduced area of the port. The style and sumptuousness of its architecture and mosaic and wall-plaster decoration were particularly fine, and invite very favourable comparison with Justinianic churches elsewhere in the Mediterranean. Apart from the periodic repairs to the mosaic floors and the addition of a baptismal font in the 8th c. AD, there were no major subsequent changes to the building until the start of the 11th c. AD. 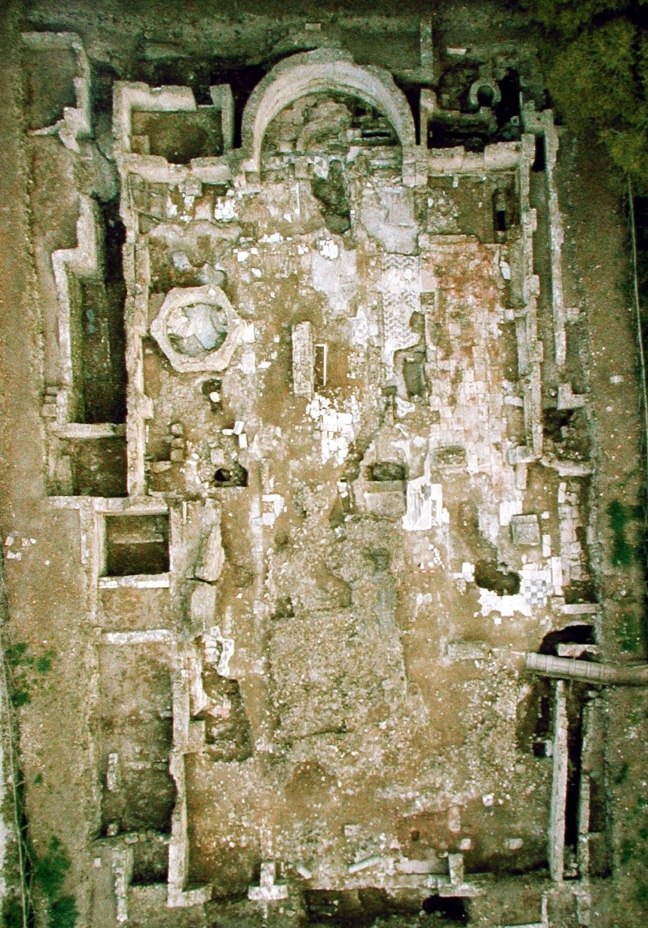 But what about reconstructing the sound of the Basilica?

In Week One you were asked to discuss your first impressions of the port when arriving by boat as a provincial traveller. Although the topic directed you to discuss what you saw, many of the learners on previous iterations of this course engaged with the whole experience of arrival in a foreign place. Particularly many of the previous learners and perhaps you too brought up the noise of a working port.

Our personal understanding of the world around is not just based on what we see. It is informed by our other senses (smell, taste, touch, hearing) and our memories and those of the people around us. Therefore the study of the past should not be based on totally visual resources. When discussing ceramics there was some discussion about the touch and feel of each of the objects and Pina Franco made reference to work which highlighted the need to make to learn.

Also the palaeobotanical information from the site means that it is possible to imagine its smell, as a great many of you have already. If we think about how senses interact we could also think, for example, about how contrasts between exterior and interior sounds might, as Rachel Ballentine suggests, almost dovetail with the olfactory - seagulls, the lap of water, grain pouring into sacks and so on. There is now even research in computer graphics that has demonstrated the impact that smell can have on the appraisal of virtual images - our senses interact and when we combine different stimuli it is possible to create ever more engaging simulations. Other work is attempting to simulate a broad range of smells using devices equipped with a fairly narrow range of chemicals. Simulation of scents is perhaps used most famously in the UK at the Jorvik Viking Centre where you can smell the past as much as see and hear it.

So, having done the Portus course myself and as a researcher in acoustics and archaeology I thought I would introduce (mostly digital) ways in which we can access the sound of the past. This builds directly on the digital reconstruction and analysis work described by Graeme in the Reconstructing Building Five step in Week Four.

The study of sound in the past is a topic that scholarly enquiry is discussing in earnest, and given the earlier weeks of this course you won’t be surprised to learn that it is a highly interdisciplinary subject! One of the approaches has been to consider recreating the soundscape (sound properties of the environment) in the same way we visualise or 3d model elements of the past. These methodologies come from acoustical engineering and consider the acoustics of a room or space. This is called Auralization. We are enabled in this work here at Southampton by close collaboration with colleagues in the internationally renowned Institute of Sound and Vibration Research.

The process is in essence the same as producing a visual model. A space is accurately surveyed (this can be done using a laser scanner, Total Station or something more simple such as hand tapes and electronic distance measure). If it is standing the dimensions of the room are recorded. Whenever possible the material properties of all the likely elements of the structure are recorded (if walls are of brick or stone, quantities of fabric). These measurements are then used to create a three dimensional model which defines the area of each different fabric that makes up the building.

The software can then compute the data to tell us a number of things about the acoustical properties of the space. These include the reverberation time of the room (how long it takes for sound to fade into nothing), the perceived intelligibility of the room (how easy it is to understand a voice) and how clearly noises can be heard. Each of these factors can be used to determine what the spaces are suited for acoustically (music, public speaking, private conversation).

It can also be used to recreate the soundscape using sounds which have been recorded in an Anechoic chamber (this is a room which has no reverberation so sound is not reflected off any surface – see the one at ISVR).

There are a number of case studies at Portus where this can be usefully applied. Surviving buildings such as the store rooms in the Grandi Magazzini di Settimio Severo and the cisternal complex within the Imperial Palace could certainly be recorded and modelled. This would allow us to think about the soundscape of the Magazzini in terms of the interior and exterior sounds. By auralizing the background hubbub and a range of languages it can give us a sense of the place to assess the character of the spaces. In the cisterns it would give us a sense of movement of sound carried through the underground rooms and conduits.

The second case study could, using the excavation reports from the Basilica Portuense described by Simon, create an acoustical model of the building. This could build upon the graphical reconstruction work by Vito shown above, bringing together data from standing remains such as Santa Sabina and from the excavations of the basilica relating to material acoustic properties. This time instead of using speaking voices or background noise a series of auralizations could be produced of different liturgical services being performed, which would in turn help us to understand how the acoustics of the space could have be exploited.