Optical, or visual illusions are caused by information gathered by the eye being processed in the brain to cause a perception that does not tally with an actual physical measurement of the object being viewed. Human biology and the mechanism of the human eye create anomalies and make us unreliable witnesses to colour contrasts.

For example, in the simultaneous contrast illusion (below), the background is a colour gradient that progresses from light blue to dark blue. The horizontal bar appears to progress from dark blue to light blue, but is in fact just one colour.

The red internal rectangle in the three boxes below is constant in colour – but how strident is this central ‘red’ depending upon its frame? Are some central red blocks more comfortable to look at? This illusion of colour difference is created when the luminosity or surrounding of it is changed.

An afterimage is a type of optical illusion where an image continues to appear briefly after the exposure to the image has ended.

Stare at the red dot for 30 seconds, then focus on the blue cross. Can you see the complementary afterimage?

Place a sheet of white paper over the right half of the green rectangle below; stare at the central cross for 30 seconds. Remove the paper and continue to stare at the cross. Note how there is a decrease in perceived saturation with continued stimulation. 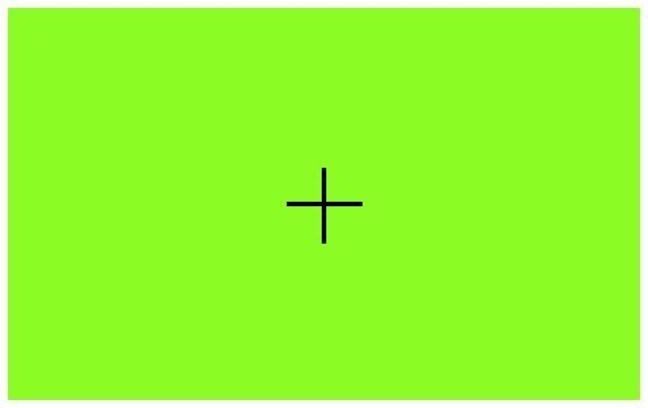 The reason you see an after image in the complementary colour is explained by the opponent-process theory of colour vision: that the photoreceptors in the eye are linked together in opposing colour pairs, blue/yellow, and red/green. Activation of one member of the pair inhibits activity in the other. And after prolonged staring at, say a green image, the cells responsible for perceiving the colour green are no longer able to respond. When you shift your focus to a blank, white area, these cells are still unable to fire for a while, but the opponent cells responsible for perceiving red can. As the light from the white area could only activate the red cells, you experience a brief red (or pinkish) afterimage.

Here’s another experiment to try on afterimages which involves all four visual primaries, red, green, yellow and blue. Focus on the black dot in the middle of the four coloured squares for about 15 seconds. Try not to blink. Then look aside at the black dot on the right. What colours do you see? How do they relate to the original colours in the picture?

Johannes Itten and The Art of Colour

Johannes Itten was a pioneering researcher in the field of colour and colour principles, and experimented with the effects of colour contrast and combination. From 1919 to 1922 he taught at the Bauhaus, the arts and crafts school in Germany founded by Walter Gropius, from which the Modernist movement developed. Itten was involved in creating the innovative “preliminary course” which taught students the basics of materials, composition and colour. He identified seven different types of colour contrast, and his theories and exercises about colour appeared in his book The Art of Colour, published in 1961. You can download a pdf of The Elements of Color, a simplified version of The Art of Color here. It contains further examples of simultaneous contrast effects.