Aedes aegypti and Aedes albopictus are two of the most prevalent mosquito species across the world. This is primarily due to their ability to adapt to new environments, and both species have a deserved reputation for transmitting viruses of medical importance to humans.

Ae. aegypti is also known as the yellow fever mosquito. As an adult it is a small to medium-sized mosquito, measuring approximately 4-7 mm in length (Figure 1). Like all insects, the body of the mosquito has three basic parts: the head, thorax, and abdomen. The head has two compound eyes, antennae that are sensitive to chemical cues, and the mouthparts. Only the female has a long mouthpart, or proboscis, that is capable of piercing skin. The thorax is the midsection of the insect, and is where the two wings and six segmented legs attach. Adult Ae. aegypti have white scales on the dorsal (top) surface of their thorax that form the shape of a violin/lyre. Each of the tarsal, or lower leg, segments of the hind legs has white bands, forming what appear to be stripes. The abdomen, which contains the digestive and excretory organs, is generally dark brown to black, but also may possess white scales.3 An identifying feature of Ae. aegypti is the characteristic violin or lyre-shaped pattern on the thorax. 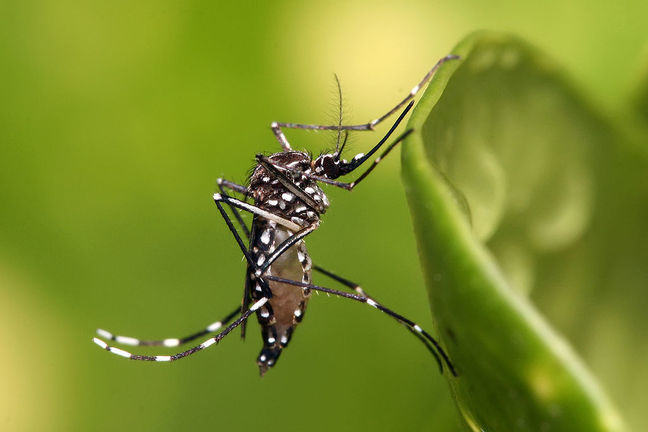 Ae. aegypti occupies urban areas with or without vegetation, and bites, rests, and lays eggs both indoors and outdoors. This species has a strong preference for taking blood meals from humans and to lesser extent from domestic mammals.5 Ae. aegypti females require a blood meal for the development of their eggs, and they will frequently take more than one blood meal for each batch of eggs she lays, which makes them a very important vector of human diseases.6

Ae. albopictus is also known as the Asian tiger mosquito (Figure 2). To the naked eye, adult Ae. albopictus resemble Ae. aegypti mosquitoes; they are both similar in colour and have white banding on their legs, but there is a slight difference in size and thorax patterns. Ae. albopictus is smaller, varying between 2-6 mm in length, and they have a single, silvery-white stripe down the middle of the top of the thorax. 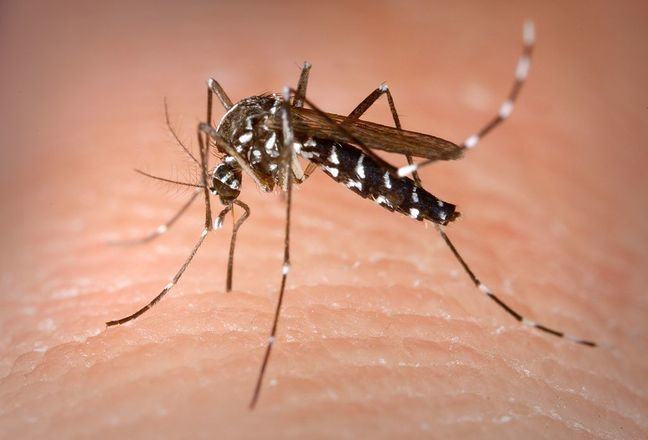 Ae. albopictus is associated with thickets and arboreal vegetation, but will also make use of man-made containers for laying eggs and the development of the immature stages.7 These mosquitoes are mostly found outdoors and are normally found in areas where they will feed on domestic and wild animals, but they will also feed on humans.8

The eggs of both species are most viable when dried out for a period and then rehydrated before hatching. Unlike other Anopheles and Culex mosquitoes, the eggs of Ae. aegypti and Ae. albopictus can survive drying out for long periods of time. This allows eggs to be transported in cargo, which has helped them to colonise areas that they were not originally native to, around the globe.