The Zika epidemic was declared in Colombia in October 2015, and as of 30th April 2016, 3,751 confirmed cases and 74,334 suspected cases have been noted by the country’s Public Health Surveillance System (SIVIGILA). Colombia’s conditions for local circulation and transmission of Zika virus are optimal due to the presence of Aedes aegypti and Aedes albopictus, in addition to a range of other environmental, clinical, and social factors.

In the months since April 2016, there has been a dramatic change in the number of reported cases. Colombia moved from the epidemic to endemic phase of Zika in epidemiology week 28 (July 2016), with a gradual decline in the number of new cases suspected and reported each week (Figure 1). By the end of 2016 the country had experienced a total of 9,799 confirmed cases and 96,860 suspected cases. As of early 2017, the number of new cases per week was low: in week 04 of 2017, 100 suspected cases of Zika were reported, compared to 6,005 cases that were reported the same week of 2016.

Figure 1. Cases reported for Zika virus, Colombia, up to epidemiological week 04 in 2017

This case study, adapted from an as yet unpublished, pilot study by researchers in Colombia, Gloria Isabel Jaramillo R. from the medicine faculty at Universidad Cooperativa de Colombia, and Luz Stella Buitrago from the Entomology Laboratory of Health Secretary of Meta Department, Colombia, highlights some of the knowledge, attitudes, and practices of people in Villavicencio, Colombia, towards Zika and its mosquito vectors.

The researchers conducted a survey in April 2016 during a community health and education campaign around Zika and control measures. Seventy six houses in two neighbourhoods of Villavicencio city, ‘Nueva Colombia’ and ‘La Reliquia’, were selected at random and individuals were interviewed using a structured questionnaire. A total of 309 people lived in these houses, with a high proportion of the sample being female (73%) and most were housewives. While much of the population has access to basic services such as electricity, sewerage, and drinking water, 96% of the homes surveyed had water storage tanks.

What did the community know about Zika?

The survey aimed to determine respondents’ knowledge of three vector-borne diseases transmitted by Aedes: dengue, chikungunya, and Zika. Considering each separately, between 40-45% respondents said these are diseases, 20-25% knew they are caused by a virus, and 10-17% did not know what they were. Most of those surveyed had some awareness of symptoms of the three viruses (Figure 1), with some of this knowledge potentially being attributable to experience of the diseases at home: 32% claimed to have had dengue, 67% chikungunya, and 24% Zika. 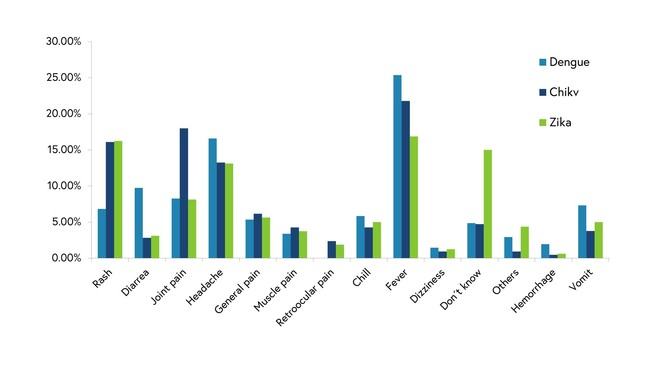 Figure 2. Knowledge of symptoms of dengue, chikungunya and Zika.

The majority of people questioned in the neighbourhoods were aware that a mosquito is responsible for transmission of these diseases; nearly all of those surveyed (95%) knew that mosquitoes breed in water, and 88% felt that a household is responsible for removal of mosquito breeding sites.

Many people in the two neighbourhoods used bed nets (51%), insecticides (27%) and repellents (13%), but there was also a lack of understanding around the mosquito lifecycle and behaviours (Figure 3). 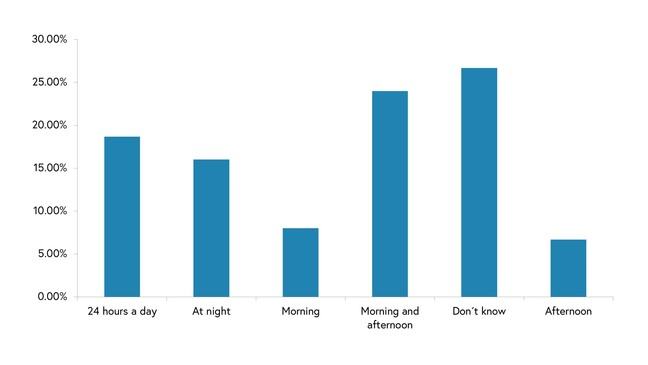 However, while 97% felt it was important to be educated about such issues, many do not implement the recommendations made by authorities, either because they are not interested (40%), “lazy” (27%) or don’t understand what they have to do (12%).

What does this mean?

Despite community education efforts and knowledge of the diseases transmitted by Aedes, many control measures are not being put into practice. Understanding does not necessarily equate to behavioural change,1,2 and it has been observed elsewhere that while some individuals commonly perform mosquito control activities, they cannot control their neighbours and this leads to a lack of motivation.1

Furthermore, a poor understanding of mosquito behaviour may mean that the preventative measures taken are less effective than they could be. Building awareness of Ae. aegypti biting times and the mosquito lifecycle must form an essential part of educational programmes for personal protection against mosquitoes.3

What do you think should be done?

It seems that in spite of good intentions and some knowledge of vector-borne diseases and potential control measures, bringing about behavioural change is a problem and gaps in knowledge can lead to ineffective practices. Week 3 will cover vector control activities in far more detail, but what could be done to solve these problems?