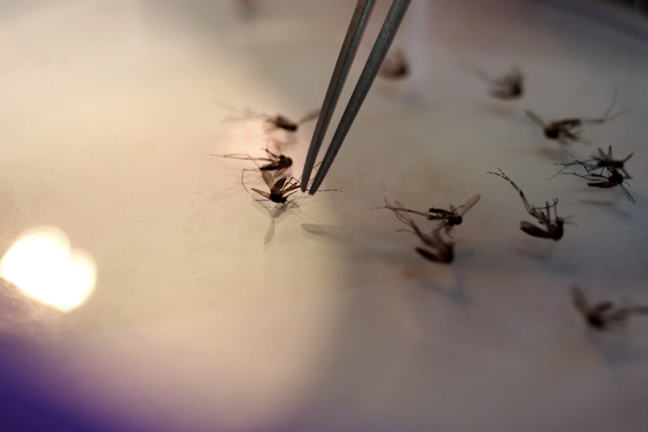 Mosquitoes on a petri dish

Why do we count mosquitoes?

In this step we will examine some of the reasons why we need to survey the number of mosquitoes in a given area. Some methods sample the larvae, some the adults, and some focus on certain habitats, so it is essential to define the goals and objectives of sampling before a study begins.

Why do we survey mosquito populations?

Vector surveillance is the monitoring of changes in vector populations over time for the purposes of:

Not all mosquito species are disease vectors and not all will bite humans, so it is important to identify the species present. If, for example, you were interested in knowing whether Aedes aegypti was present in a certain location as a potential vector of Zika, the behaviour and life cycle of this species should be considered.

A range of methods are used to monitor Ae. aegypti mosquitoes, and in later steps we will see how both adult and immature stages of mosquito can be trapped for surveillance purposes. While threshold numbers of Ae. aegypti have been proposed to suggest when human populations are at risk of yellow fever or dengue transmission, no indices currently exist for Zika transmission. It is therefore important to perform basic epidemiological studies to establish the relationship between Ae. aegypti indicators, such as densities of female Ae. aegypti and proportions of Zika virus-infected females, and clinical outcomes. These studies should take into account the lag between mosquito infection and human disease in a Zika-endemic region.

Until we have reliable data to generate these indicators specifically for Zika, dengue thresholds can be used as a proxy to see whether Ae. aegypti population levels have reached densities considered to put communities at risk of disease transmission.

If species that act as vectors are identified in a mosquito survey, knowing the size of the population will help in determining whether control methods should be employed, and if so which methods to use. In order to ensure that the results of the study accurately represent the real situation, sampling should involve replication and may be based on random selection of test sites or use prior knowledge of mosquito spatial distribution.1 Unfortunately, there are often limitations on human resources, time, and access to certain habitats that can constrain sampling. Furthermore, when researchers use prior knowledge of where species have been found it can introduce a bias that leads to overestimates of the population abundance, as very productive breeding sites are chosen and assumed to be representative of the area as a whole.