0:12Skip to 0 minutes and 12 secondsSo what about control? Well some countries spend an awful lot on control; some countries spend a very little control, and whether it's lot or a little, we see huge amounts of dengue being transmitted. And we're assuming that Zika and dengue will have similar transmission dynamics. We go for example to Singapore, where I have been a consultant several times, to look at their control programme. For a short, maybe fifteen years, they were able to maintain dengue-free Singapore; of course it's a very, very small country.

0:50Skip to 0 minutes and 50 secondsBut since about the mid-1980s they failed and they have huge amounts of dengue now which they attribute to people coming in from Malaysia, maybe partly true, but the bottom line is that there is no country in the whole world that has been able to sustain dengue control by mosquito control it's a very sad fact.

1:15Skip to 1 minute and 15 secondsWe are looking hard at new, novel, innovative ideas: genetically modified mosquitoes, Wolbachia, an intracellular bacterial parasite that apparently reduces the susceptibility of the mosquito to the virus and we're looking at several other methods because we know that the methods that are being used at the moment simply don't work. This is very tragic situation it's a very bad situation when we look at Zika. We have to face up to it and I think we have to look for new ideas.

As dengue and other insect-transmitted diseases have increased globally, vector control interventions using insecticides have been employed. Unfortunately, in some areas the process of natural selection has favoured mosquitoes that are resistant to these insecticides, and this creates a challenge to the control of the spread of these diseases and Zika. Before reading the article, listen to Professor Paul Reiter describe why these challenges have led us to research and develop new techniques for controlling mosquitoes.

When insects are exposed to a new chemical insecticide the majority will be immobilised or killed, but in a large population there may be a small number that survive. These individuals that are not killed may have a different genetic make-up that allows their bodies to evade or breakdown the chemical: they are said to be ‘resistant’ to the insecticide. If these resistant insects breed they will pass on this ability to deal with that particular chemical to their offspring, and with time this insecticide resistance can become widespread. The consequence is that the insecticide is no longer useful for controlling the insect population.

Resistance to insecticides can be caused by a variety of physiological changes within the insect, including structural changes to the target site of the insecticide, increased activity of enzymes that are able to detoxify the insecticide, and changes in the insect cuticle that slow down absorption of the chemical. Finally, some insects show behavioural resistance, in which they may avoid the effects of the chemical through a change from their normal activity. An example is a preference of a bloodfeeding insect to feed outside of homes instead of inside, and by doing so avoid exposure to insecticides sprayed indoors or in bed nets.1

Has insecticide resistance been identified in mosquitoes?

As with other mosquitoes, resistance to pyrethroids in Ae. aegypti is associated with kdr (knockdown resistance) mutations.3 These mutations affect the nervous system and make it less sensitive to the insecticide. Other factors have also been implicated in insecticide resistance in Ae. aegypti, including detoxification enzymes,4 with esterases (ESTs), glutathione-S-transferases (GSTs) and mixed function oxidases likely playing a major role5.

Ae. aegypti have been caught across Brazil and their kdr mutations have been studied to obtain an estimate of the distribution of insecticide resistance. Individuals with the ‘susceptible’ gene are now becoming increasingly rare, and very high levels of resistance have been reported in some locations.5 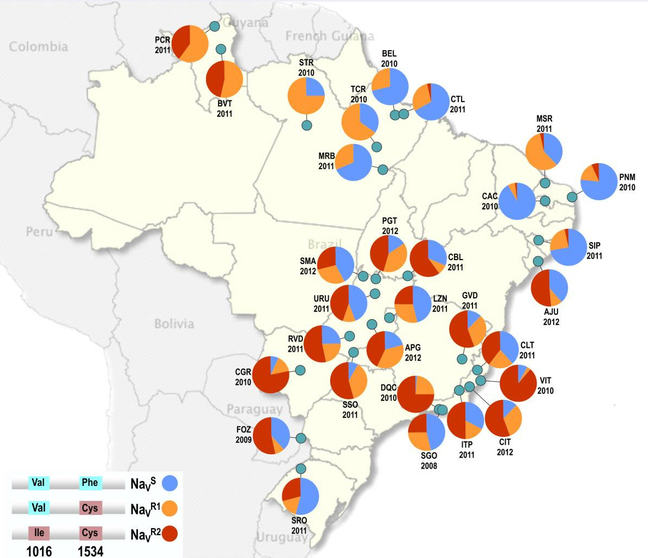 The historically used organophosphate temephos is a good example of an insecticide that has become increasingly less effective for Aedes control in Brazil in recent decades (Figure 2)7. Multiple metabolic genes are understood to be involved in temephos resistance. 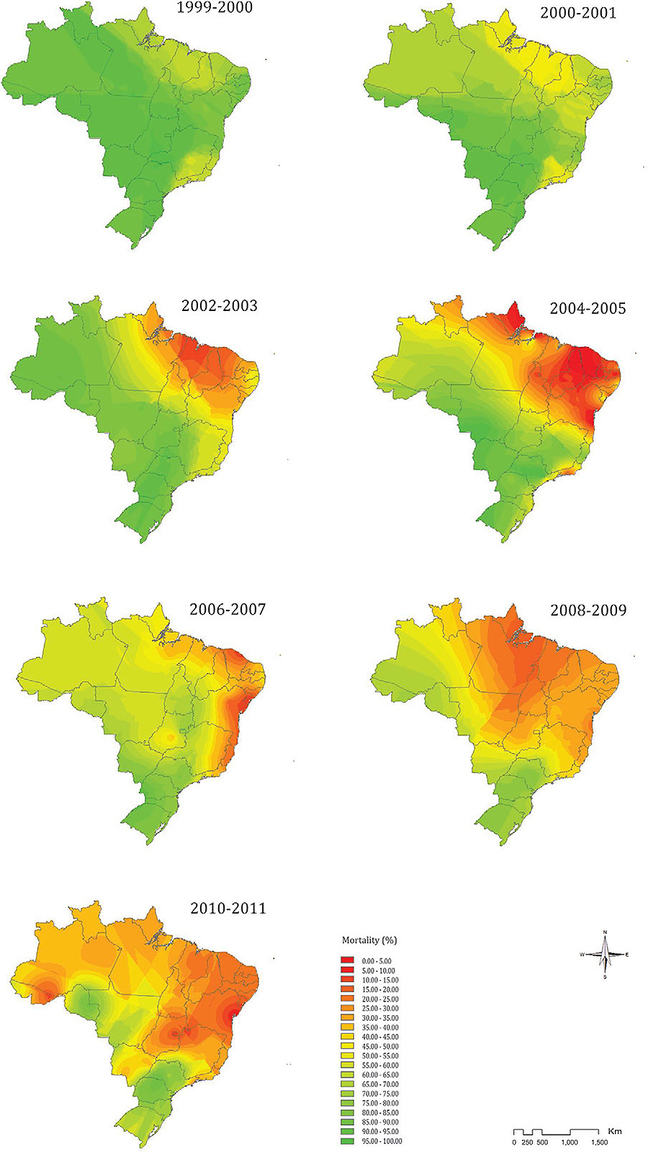 On a local scale, studies in Mexico have recently shown that the distribution of resistance in Ae. aegypti can vary significantly between neighbouring towns.6 This means that large-scale blanket vector control strategies may have limited success, and suggests that small-scale tailoring of vector control interventions may be needed.

Early detection and characterisation of insecticide resistance is critical to the development of strategies for resistance management. If local variations in resistance profiles are discovered, an effective solution may be to use multiple different chemical insecticides, either in mixtures or in rotations. In this way, a mosquito that is resistant to one of the chemicals will be killed by other chemicals in the mixture. Different chemicals are also used to target adult and larval mosquitoes, so if some populations are resistant to a larvicide they may still be knocked down by an adulticide.

The development of new chemical agents, which target different sites within the insect or that are not readily broken down by the insect, is an ongoing challenge. Scientists are also using biological rather than chemical control methods, which offer reduced potential for resistance development. Bacillus thuringiensis israelensis (Bti) are bacteria that release toxins capable of killing mosquito larvae, and they can be used in bodies of water as a form of larvicide. Bti has been shown to be highly effective against target mosquitoes and related insects without being a threat to humans and other animals.7 This approach offers great potential in controlling the breeding of mosquito vectors of various diseases, but their use in the field is affected by various bioenvironmental factors, which mean weekly applications are required in most habitats. More novel biological control methods are discussed in the next step.