0:48Skip to 0 minutes and 48 seconds Can you identify the five levels of SOLO in relation to this programming task and the sequence of learning? After you’ve watched the clip, take some time to think about whether you have a preference for Bloom’s or SOLO. And do these taxonomies align with your teaching approach? Share your thoughts in the comments below. All right, 3, 2, 1, go. [WHIRRING] [BEEPS]

1:18Skip to 1 minute and 18 seconds [BEEPING] Ooh, all right. Now, yours had a mistake in it, didn’t it? Now, could you tell which one was wrong? Should we watch it again? And I want you to try and work out which move was wrong I know which one– So just leave– press Go again when I say ready. Three, two, one, go. [WHIRRING] [BEEPS]

2:09Skip to 2 minutes and 9 seconds I think it might be before that. Should we have another look? Put the cards back. I know too. Put the cards back as they were. Let’s look one more time. OK, three, two, one. Press go. Bumped-ed my head. Bumped my head. Oh, dear. [WHIRRING] [BEEPS]

2:32Skip to 2 minutes and 32 seconds [BEEPING] I tell you what, let’s watch them. Poppy, let’s watch them one at a time. So we’ll watch this one first, because this one does it right, doesn’t it? [BEEP] It’s going to tell them. It goes forwards, left, right, forwards, left, backwards. Now, let’s watch what this one does. Let’s start here so we can see it. OK. So it goes forwards. Forward. Oh, then he goes backwards. Oh, it’s going on it own backwards So it’s– which one is it? So it goes forwards. Backwards. No. It is this one. It’s that one, isn’t it? Yeah, that one. What should that one have been? I did– What should that one have been? That should be turn left. It should be turn left.

How does SOLO develop our understanding?

In their chapter in Computer Science Education (2018, eds. Sentance, Barendsen, and Schulte), Hubwieser and Sentance highlight SOLO (“structure of observed learning outcome”) as a possible alternative to Bloom’s taxonomy.

“Following a totally different approach, Biggs proposed his SOLO taxonomy. Based on his theory of meaningful learning, he put more emphasis on the learner and the actual learning outcome, instead of the learning material.” 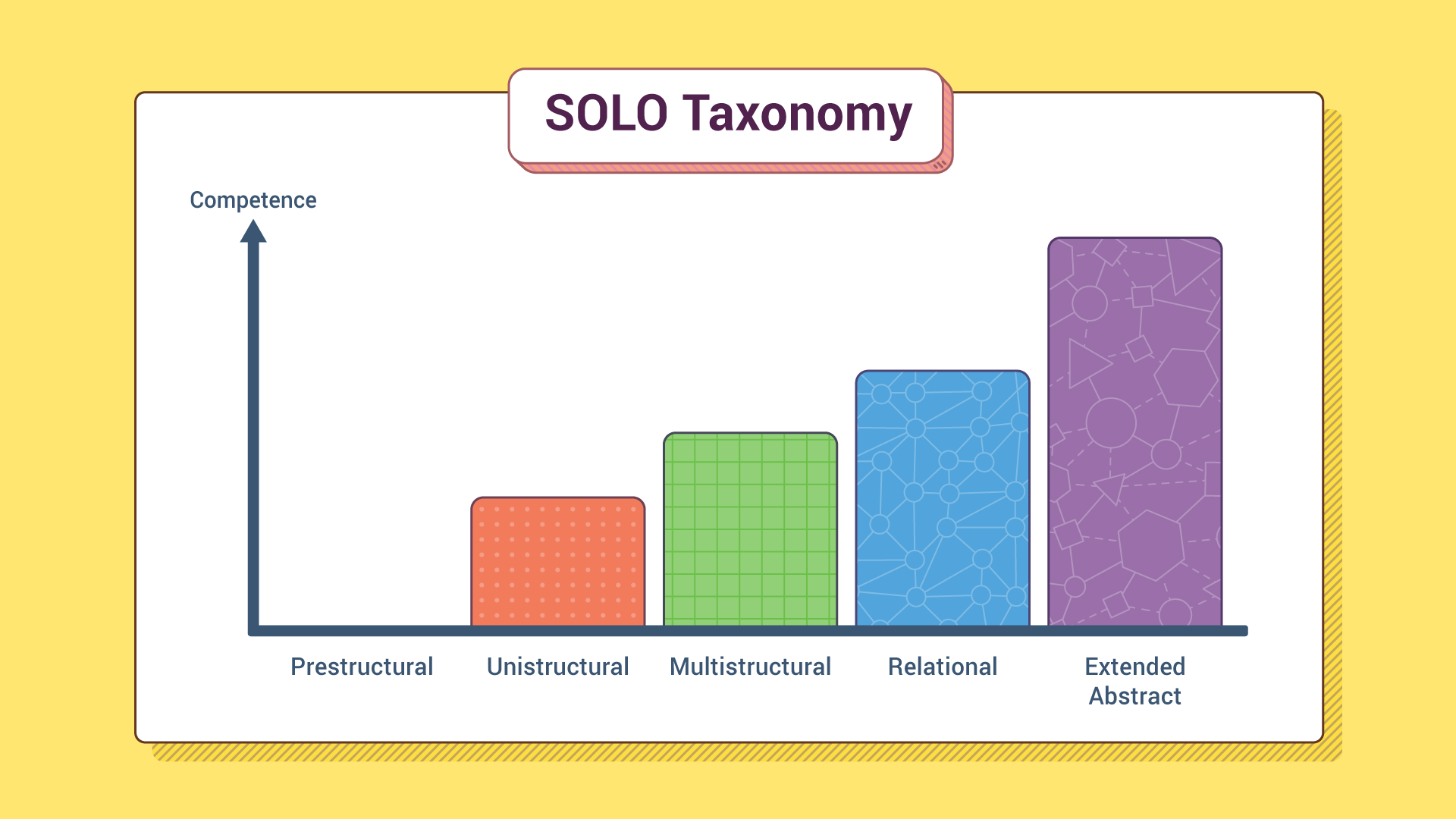 Hawkins and Hedberg (1986) then applied these five levels to the programming patterns of beginner programmers drawing simple shapes:

How do the five levels of programming summarised above help you understand the sequence of learning? Do you have a preference for Bloom’s or SOLO taxonomy, and do they align with your teaching approach? Leave your comments below.

Learn how to deliver primary science in an engaging and practical way in this course for teachers of 5-11 year old pupils.

Explore effective research-informed ways of using technology to support teaching and learning in the classroom.

Develop your responsiveness as a teacher: learn how to assess student understanding and tailor lessons to improve learning.