This content is taken from the Coventry University's online course, Principles of Global Logistics Management. Join the course to learn more.
View course
2.10

Growing population is an important factor to consider when discussing what is shaping global logistics and globalisation generally.

World population is due to hit over 9 billion by 2050, according to the United Nations (2019). The size of a nation’s population affects several issues, which global logistics businesses and brands need to consider.

There are both opportunities and threats.

Growing populations mean more potential consumers and workers. Demand for goods will rise and firms will have people to act as labour. This will have different effects on nations dependent on their stage of industrialised development, the median age of the population and their educations and skills level.

The below table of the top 10 countries with the highest populations demonstrates some of the problems. Many of the largest population growth areas are in Asia and Africa. Some European and developed Asian countries are going to have population falls by 2050. 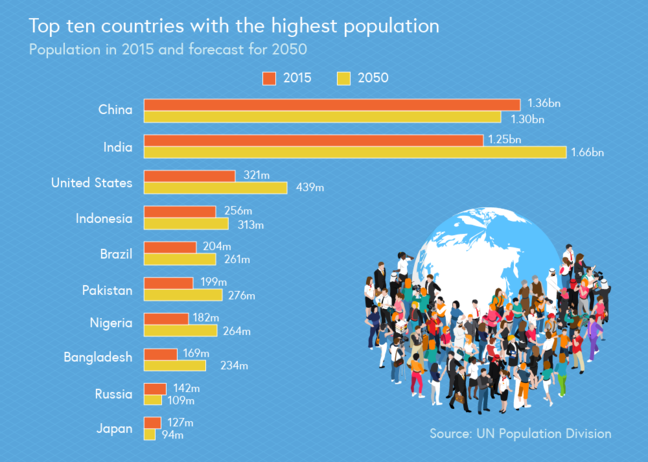 The other issue is the median age of populations in various nations. Developed countries such as Japan, China and some European nations are already experiencing population shrinkage and have a high median age. This means that most of the population are elderly and potentially retired from active work. Elderly citizens tend to spend less on consumer goods too.

An ageing population causes problems with extra healthcare costs and reduces the economic productivity of the country. Having fewer young people paying taxes to fund the elderly means they need to be more productive. 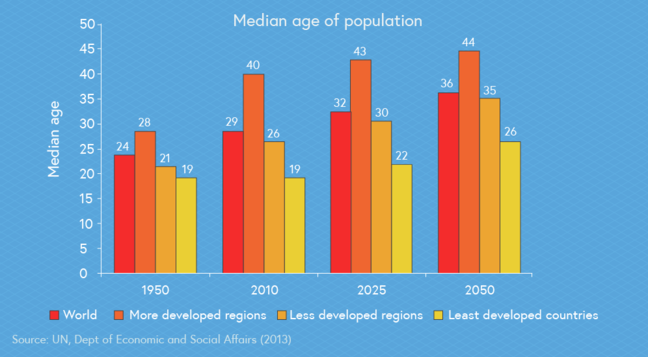 From a younger person’s perspective (below the median age), this can encourage them to emigrate to another country with lower taxes and better opportunities. This argument is dependent on one assumption: adult workers are educated and there is a demand for their skills.

In a developing country, such as any nation in Africa, there is no guarantee that workers will have skills or a reasonable level of education. This causes problems for developing countries. They realise the country has many workers, but not enough businesses or firms to keep everyone working.

The opportunity is that global brands from developed nations who are globalised will want to exploit the developing nation’s labour pool. The problem is whether the local population has the correct skills or the correct attitude to be trained. Developing nations and their citizens are keen to engage for self-interest reasons, mainly to increase their standard of living and be able to afford middle-class goods that developed nations consume.

If a path can be found that creates a win for both developing and developed nations to take advantage of growing populations, then both sides will grow their economies and be able to deal with the rising age of workers. This situation means that global logistics has a bright future providing goods to consumers and ensuring they earn enough to keep buying.