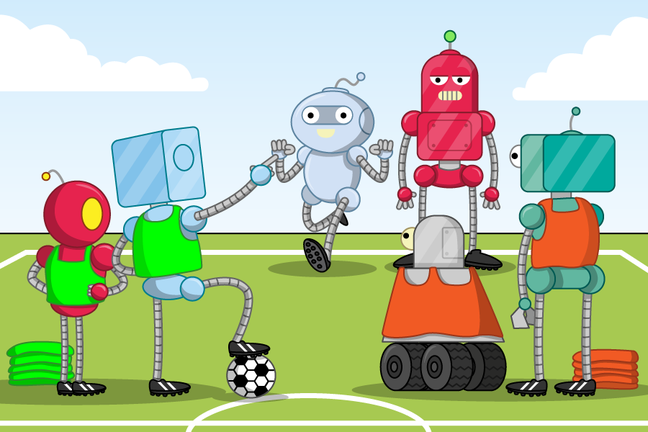 In this step, we’re going to create a list of players and use it to split those players into two random teams. We’re going to demonstrate one way of solving this problem, but then we’ll ask you to try to find an alternative method, using a different way of manipulating lists.

Feel free to create your own list. Be careful to make sure that each element of the list is a string (i.e. enclosed within a matching pair of single or double quotation marks), and that the elements are separated by commas.

Picking a player is not as simple as just choosing one element from the list at random, even though that’s the first step. We also need to make sure that the player is added to one of the teams, as well as removing that player from the original list so that they can’t be picked again. As we have to do this multiple times to split the players into our two teams, this is a good candidate for turning into a function.

Notice that in order to use the choice function to randomly pick a player from the list, we’ve first had to import it from the random library.

At the moment this program will pick one player from the players list, add them to an initially empty list called team, and remove them from the players list. However, we’d also like to be able to add some players to a different team. We can manage this by passing the desired team to the function as a parameter:

This code will now add one player to team A, and one to team B.

Repeating for all players

Now that we’ve worked out how to add players to teams, we need to keep going until all of the players have been allocated to one of the teams. Using a loop, and making sure to not try to pick a player from an empty list, finish off this program to split the players into two teams, teamA and teamB. Make sure to print the two teams at the end of the program to make sure it’s worked, and share your code in the comments.

Rather than picking a random player each time to add to the teams in turn, there are a few other algorithms we could use for splitting players between teams. Pick one of the following algorithms to implement, and share your code in the comments.

An important part of coding is testing your program by making sure that it works in all situations. Try the following lists of players, and try each of them multiple times to make sure that your code is correctly randomising the teams.

What problems might these examples show up? How did you fix them? Share your experience in the comments.

Sometimes it may be necessary to split a list of players into more than two teams. Create a new function which takes as parameters a list of team names and a list of players (both of these will be lists of strings), and allocates players to teams as evenly as possible.

Some of the algorithms discussed earlier may make it easier or harder for you to do this. Share your code, as well as any problems you encounter.