0:03Skip to 0 minutes and 3 seconds Now it’s time to make our first GUI. So open up the IDE and save the file as firstgui.py. Now the first name we’re going to type is from guizero, import app and text. Now this line tells Python to import the app and the text widgets from the guizero library. Now we are going to create our app. I’m going to call my app with a little a. And then I’m also going to set a property of the app, this case being the title. And I’ll put ‘This is my first GUI’.

0:45Skip to 0 minutes and 45 seconds Now once you’ve created the app, you can add other widgets to it. So let’s add a text widget to put a message onto our screen. I’ll call it message, and I’m going to say text. Now I need to tell it what app that this widget should be attached to. It belongs to the app, and again, I can set a property– in this case, I’m going to set the text property to say, guis are cool.

1:17Skip to 1 minute and 17 seconds Now the final thing I need to do is I need to tell my app to display, and I do that by saying app.display and calling its display function. , Now this will tell the computer to display on the screen, and that’s important– without that step, our app’s not going to work. Right. So let’s run our program and see what happens. So I run my program, and my first GUI appears. We can see the title has been set to This is my first GUI, and we can also see that our message has been displayed– guis are cool. Now GUIs use object oriented-programming. Objects, like the text label, have properties that can be set.

2:00Skip to 2 minutes and 0 seconds Now these properties can change things like the colour or the text size or maybe it’s alignment, and you can use these to customise your GUI. So let’s try changing the properties of our text and adding some more code. So what I want to do is add a second message. So I think the first thing I’ll do is just rename message to be first message. I’ll add a second message in the same way. Again, it belongs to the app. I will set the text to be maybe this is green.

2:33Skip to 2 minutes and 33 seconds I’ve now got two text widgets in my app. What I think I’ll do is I’ll change the first one so that the text is much bigger. Let’s say it’s text size to be 40, and as I’ve said, the second message is going to be green. Maybe I’ll set it’s background colour RBG to be green. Now, when we run our program, let’s see what the result is. Again, so our GUI has appeared. Again, it’s got the same title. The guis are cool message is much bigger– in fact, the text size 40, and we can see that in a second message is indeed in green. Time for a challenge. Can you modify your program to add another message?

3:18Skip to 3 minutes and 18 seconds Try changing the colour of the text to red or perhaps use a different font. When you’re finished, copy your code to pastebin and share the link in the comments section, and remember to ask if you need help.

Load up your chosen code editor (usually part of your IDE) and save the empty file as ‘firstgui.py’ straight away. Once done, put this code into the coding window:

Before you run the code, take a moment to predict what you think you’ll see. This is a useful habit to get into as you develop your coding abilities; with time you should find that you are increasingly able to anticipate how a program will run. This is particularly useful for spotting logical errors in students’ code in lessons. It’s also a good habit to get your students into!

Run your program, and you should see something like this: 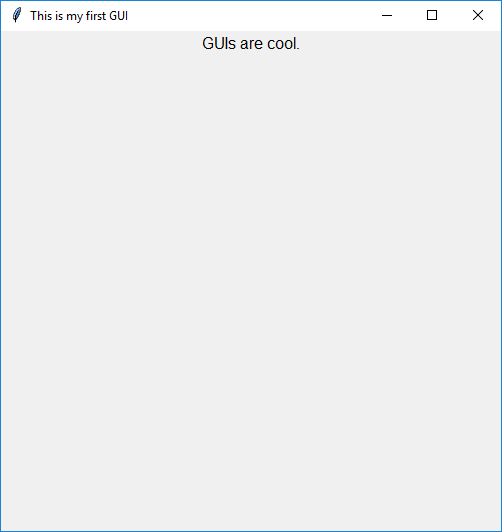 Let’s look at the code line by line, and see what you’ve achieved.

This app doesn’t ‘do’ anything at the moment. For this to happen, you’ll need to provide some additional code, which we’ll look at shortly.

If you’ve done any work with object-oriented programming before, you’ll be aware of the concept of objects having different properties. If you haven’t, don’t panic — GUIs are one of the nicest ways to get to grips with them.

A property is something that helps describe an object like your Text label. The label has colour, text size, an alignment (e.g. left, right, centre) and lots of other things that can be customised to create the type of GUI that you want.

Once you have created a widget and given it a name (yours is called message), you can use widgetname.property = new_value to change the way it looks, e.g. message.text_size = 40 to change the text size to 40.

Replace all of your code with this:

When you run the code, you’ll now see that you have two text labels and that the first is bigger but less colourful than the second. 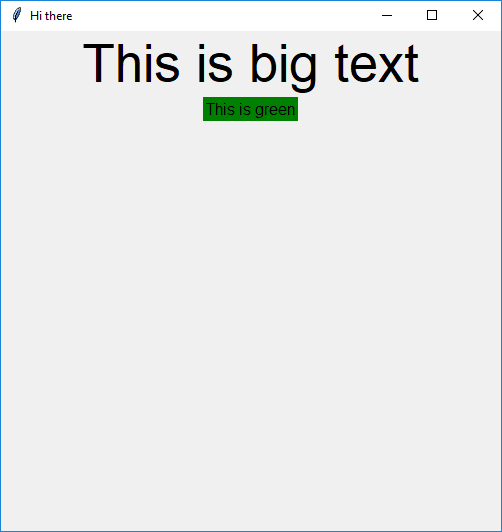 When creating GUI elements in guizero remember that the widgets appear in the same order as you create them.

One aspect of improving your confidence with coding is to get used to reading the documentation for the different libraries that you want to use. The documentation for guizero describes how to install it and create GUIs using it, as well as providing a reference for all the widgets. The Text widget reference will help you in solving these challenges.

Share your code on Pastebin and copy the link in the comments section; remember to ask if you need help!