The post-war period saw varying challenges for public health with the rise of chronic disease. In this Step Peder Clark looks at the ‘epidemiological transition’. We learn what it was, when it occurred and why it was significant.

What is the ‘epidemiological transition’?

The term ‘epidemiologic transition’ was coined by epidemiologist Abdel Omran in an influential 1971 paper that described how “degenerative and man-made diseases displace pandemics of infection as the primary causes of morbidity and mortality” in many high-income countries. Omran’s theory focussed on the “complex change in patterns of health and disease and on the interactions between these patterns and their demographic, economic and sociologic determinants and consequences”, and described three stages of the transition. 1

What are the stages of the epidemiological transition?

The first, The Age of Pestilence and Famine, described a stage when mortality was high and life expectancy was low; this was followed by The Age of Receding Pandemics when mortality declined progressively, but infectious diseases were still responsible for the majority of deaths. Finally, The Age of Degenerative and Man-Made Diseases described a point at which “mortality continues to decline and eventually approaches stability at a relatively low level”, and chronic, non-communicable disease has outstripped infectious diseases as the primary cause of death.

Omran used demographic data from England and Wales, Japan, Chile and Ceylon (contemporary Sri Lanka) to illustrate his theory (see Figure 1). In Britain, Omran argued, the epidemiologic transition had occurred as a result of the Industrial Revolution of the nineteenth century. In the twentieth century, he noted that

the gradual shift in disease patterns characteristic of the classical transition can be seen in the steady decline of infectious diseases (including tuberculosis and diarrhea) and the moderate increase in cancer and cardiovascular diseases in England and Wales up to 1920.1

Following the First World War, he argued that this pattern became “more distinct”, and that “since 1945 the increase in cardiovascular deaths is particularly striking.”1 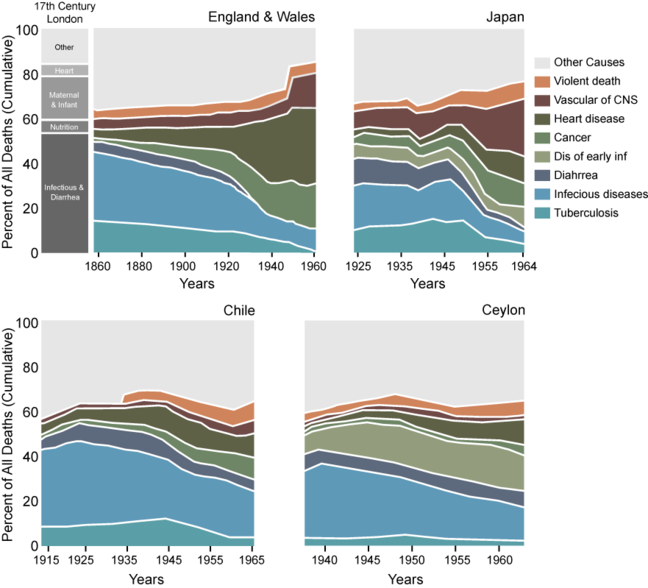 Why was it significant?

The epidemiological transition was significant because it provided an explanatory model for the emergence of modern epidemics of chronic diseases such as heart disease, cancer and stroke in many Western industrialised nations in the immediate post-war period. In a British context, it complemented the theories advanced by the public health doctor and demographer Thomas McKeown in his controversial book The Role of Medicine.

This argued that the population growth, the reduction of infectious diseases and improvements in life expectancy seen since the seventeenth century had had less to do with advances in medicine and public health, and much more to do with the economic forces that had shaped social conditions. 2

Both Omran and McKeown’s work have been subject to challenges in the past few decades. The former’s theory has been expanded with an extra stage appended, The Age of Delayed Degenerative Disease. 3 McKeown’s thesis meanwhile has been attacked on empirical grounds, and also for its conceptual assumptions, most powerfully by historian Simon Szreter. He argued that there is little evidence of a direct link between growing wealth and improvements in health. 4 Nonetheless, both the epidemiologic and demographic transitions remain important concepts for understanding patterns of disease in post-war Britain, and the reasons behind them.

All over the world countries are now experiencing a shift in disease burden, from infectious diseases to chronic disease. How do you think this epidemiological transition will challenge public health in the future? How, for instance, can continuity in care for chronic conditions be provided? Is public health prepared to meet the challenges of an ageing population? Or the impact of climate change?