This content is taken from the Trinity College Dublin's online course, An Introduction to Radiation Oncology: From Diagnosis to Survivorship. Join the course to learn more.
View course
1.13

0:47Skip to 0 minutes and 47 secondsIt's because I had some experience with seeing radiation oncology patients or cancer patients when I was a junior doctor. And I was really surprised by this interesting area of therapy. What is the role of the radiation oncologist?

1:52Skip to 1 minute and 52 secondsAnd the radiation oncologists are also involved with the follow-up care often of that patient, and also supporting the family members, deciding how often we need to see the patient afterwards. And if they have any more problems from their cancer, looking after that as well. Tell us about the expert team of professionals in radiation therapy.

2:10Skip to 2 minutes and 10 secondsSo radiation therapy is delivered by expert teams, and one of those roles, which is mine as the radiation oncologist, is the medical part. The radiation therapist-- they're called different things in different countries, but usually radiation therapist or radiation therapy technologist or RTTs, are another key part of the treatment delivery and care team. And then the other two professionals that are involved are the medical physicist, who have another important function in helping design the radiation programme for the patient, and also looking after the very complex equipment and making sure that it's doing what it is meant to do in treating the patient. There are also cancer oncology nurses who are part of the care team as well.

2:57Skip to 2 minutes and 57 secondsSo it's a very, very team-based treatment that delivers the radiation therapy to patients. How do doctors decide if a cancer patient needs radiation therapy as part of their management?

3:08Skip to 3 minutes and 8 secondsAs doctors, we have to make decisions about what treatments are suitable for patients, and as radiation oncologists in particular, we are looking at the clinical trials that have been done in the area that have come up with the types of patients particularly that benefit from radiation-- actually that's most cancers across the spectrum. But in a particular patient, we use the knowledge that we have from the medical literature and in the most clinical trials. We use our own experience and judgement, but particularly we use all of the features that are known about that cancer and that particular individual patient to weigh up the pros and cons whether radiation therapy might be beneficial to them.

3:50Skip to 3 minutes and 50 secondsAnd that depends really on the cancer, on the stage of the cancer. So if we're trying to give the cancer treatment that might cure that patient, if we're trying to give treatment that might improve quality of life or will help pain, there is a different set of decisions we make. But basically it's built up with scientific knowledge and our experience of who will and won't benefit from treatment. Is radiation therapy an effective treatment in the management of cancer?

4:55Skip to 4 minutes and 55 secondsAnd in the setting where people have pain from cancer that's spread into bones or other parts of the body, or they're having other problems where the cancer is causing symptoms but the patient isn't necessarily going to be cured, radiation is also a very effective method of alleviating pain, of stopping bleeding or other symptoms that can impair the quality of life of patients. What is the most rewarding aspect of being a radiation oncologist?

5:23Skip to 5 minutes and 23 secondsI think one of the most rewarding things about being a radiation oncologist is that you get the privilege to get quite close to patients that have a serious illness. Nearly all our patients have cancer, and their families, and they put great trust in you to help them. And that's an amazing privilege. The other really rewarding things are that you actually have at your disposal a therapy which is really effective. So it's by far the more common thing that you can actually help that person with the treatment that you're offering them.

5:56Skip to 5 minutes and 56 secondsAnd the other really rewarding thing is that it's such a team-based job-- that you work with a whole team of different types of experts and people with different skills, that really will have that common goal, which is about trying to look after the patient. And there's no job that's as exciting as that.

Who's who: Radiation oncologist 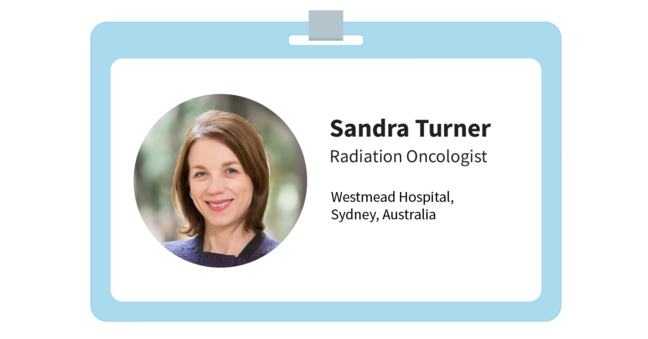 What does a radiation oncologist do?

Radiation oncologists like Sandra work with the multidisciplinary team to: