0:25Skip to 0 minutes and 25 secondsWell the reason why I chose to become a radiation therapist were twofold I think. First of all, I have a more scientific or technical interest. And this was already known, but later on I also found out I really like to work with people, and also especially with patients.

0:51Skip to 0 minutes and 51 secondsThe road to RTT depends on the phase in which the patient is. So patient comes to the radiotherapy department as far as being seen by a doctor, the radiation oncologist. And later on, when the treatment preparation's being done the RTT gets involved, for instance, in scanning, imaging the patients. With CT or MR. And then the second steps are preparations being made, dose calculation being performed. In that case, that's being performed by RTTs. And the actual dose delivery, the delivery of the radiation therapy treatment is being performed independently by RTTs.

1:36Skip to 1 minute and 36 secondsThere are different aspects you need to know. I think first of all, you need to have a broad understanding about the technical treatment delivery, the equipment you use, the interaction of radiation with the patient. And on the other side, you also need to know all about the medical part of the treatment. And the radiation therapy treatment is very precise. So this is something you also need to know, and need to have on a personal level.

2:12Skip to 2 minutes and 12 secondsTreatment is a really important role of the RTT to take care of the patients. So one side, you have to monitor the side effects, and you can warn, for instance, the medical specialist if something occurs. And the other side, you also have to take part of the psychological situation of the patient. So most of the times you see this patient coming in for many weeks. And you can also follow up this patient and see what's going on. And I also think that the RTTs has an important role. Because still a lot of people see the doctor on a big statue and there are not so open and willing to talk about their problems.

2:56Skip to 2 minutes and 56 secondsAnd as an RTT you have many more interactions with the patients, and you have more opportunities to really discuss their personal situation.

3:10Skip to 3 minutes and 10 secondsWell, most rewarding about the job of an RTT is being able to help people in difficult situations, being involved in curing or taking part of the palliation of patients. And another thing, what I really find rewarding is that as an RTT you can also be involved in technical innovation. And that's really where we're going to see the things that you worked on or together with a team of people to improve cancer treatment, is also being implemented in a department. And you can see that you are able to change the treatment for the better.

Another person you will meet in pre-treatment and treatment delivery areas is the Radiation Therapist (or RTT). In this video, we meet Martijn Kamphuis who works as an RTT at the University of Applied Science in the Netherlands. He talks about why he wanted to work as an RTT and what the role consists of. 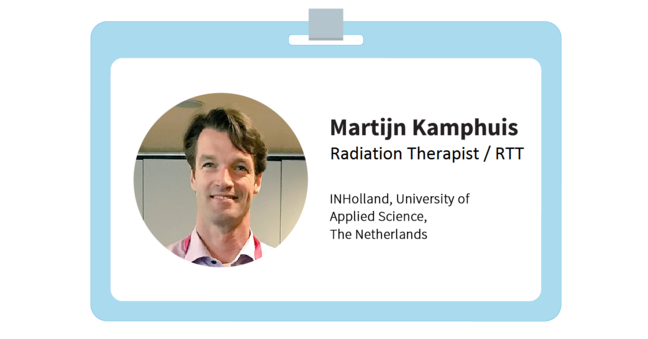 What does a Radiation Therapist or RTT do?

In the radiation therapy department, RTTs: