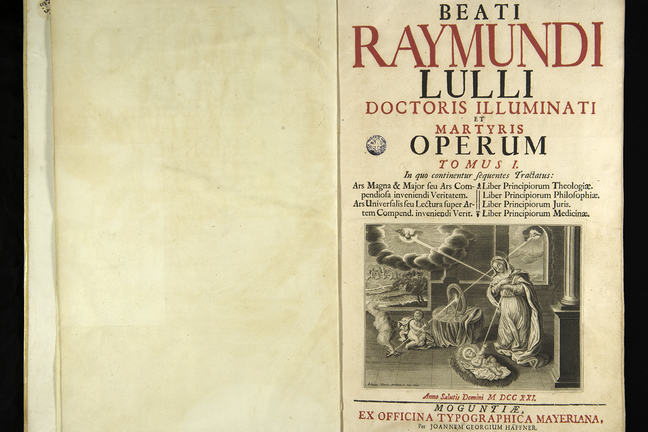 For more than 20 years, between 1721 and 1742, Ivo Salzinger worked to make a Latin edition of the works of Ramon Llull. He collated, translated and wrote comments on Llull’s works. Eight volumes were published before the grand project was interrupted. In each of these volumes, we find this highly suggestive initial emblem.

In Ramon Llull’s work we see the harmonious confluence of these two axes: intellectual activity and divine revelation. For this reason, his thinking is as logical as it is contemplative.

If you look closely, the beams of light from Salzinger’s engraving are in dialogue with the lines of light of the installations of the artist Jeongmoon Choi (Echo, 2016; Invisible-Fold, 2015), but they are also in dialogue with the network of interactions between the subjects and issues of Llull’s system, which Atanasius Kircher embodies in an engraving of the Ars magna sciendi (1669), a work inspired by Llull’s ars.