This content is taken from the UNSW Sydney's online course, Re-Enchanting the City: Designing the Human Habitat. Join the course to learn more.
View course
2.4

0:06Skip to 0 minutes and 6 seconds>> ALEC TZANNES: By the later part of the 1900s, 1990s, we knew already that that land had changed dramatically. And this is the story of city making - and remaking. Where social, economic, financial forces are always changing cities. And this is a good site to explore that idea because by the late 1900s, the site had become very valuable for other uses. By then universities had significantly developed. There were more than 80,000 students in the area. And the stock which was small warehouses, light industrial uses, and lower cost housing had become valuable housing, adapted through urban design to become a wonderful neighbourhood called Chippendale.

0:54Skip to 0 minutes and 54 secondsIn other words, in fact in 1975 the area around it, through the work of urban designers and the City of Sydney, had been transformed from a rundown lower cost housing area and industrial area to a wonderful mixed-use neighbourhood. And this was the largest piece of land within that area that had retained the uses for over 100 years.

1:20Skip to 1 minute and 20 secondsAnd the brewery moved to more effective places to make its products, and the land became available for adaptive reuse. How are they controlled? They're controlled by, if you like, governance - or what we'll call politics, because the stewards of our cities are the people we elect. And the policies they make, the regulations they make, often designed by the professions that make up the built environment professions are how we control change in cities. So Central Park Sydney is a great example in the City of Sydney of the natural forces that change cities, because it's significant in its size, in its location, and it's transformative in its impact on the city.

2:30Skip to 2 minutes and 30 secondsThe design competition, if you like, fleshed out the development potential of the site, and following the competition through a process of collaboration, consultation, both the state government of New South Wales and the city government - the City of Sydney council - was satisfied that the development was appropriate in its scale, and its floor space, and its balance of open space. The site had significance beyond the neighbourhood because it is on a major thoroughfare of Sydney, does have large buildings, if you like, around it to the university campus, such as UTS tower, does have Central Railway nearby. So the site, we could say had greater scale of infrastructure to support greater development, and of course density.

3:24Skip to 3 minutes and 24 secondsIncreasing density in our cities is vital to a more sustainable planet - absolutely vital. So we could put some density as well. And we had to work out where to put it. When Central Park was being designed - and when I say Central Park, I'm now talking about the whole precinct, not just the park - there are four or five major issues that needed to be addressed. The first is around connectivity. And that's creating a network of connected streets and blocks. So we look closely at all the surrounding streets and blocks, and we try and make the site that we're looking at as permeable and as connected as possible. The second major driver is the public open space.

4:10Skip to 4 minutes and 10 secondsNot just the streets, but the making of the park-- its location to serve the community interests to a maximum, and its design to achieve good solar access and other landscape amenities. Another major issue is the conservation and adaption of key elements of history. And that involves several buildings and some engineering infrastructure. Another determinant is, if you like, the built form so that we can achieve a place that seamlessly grows into another place. That you have a connection between the form, scale, and even character of the buildings, with the buildings that are around it. Having said that, another important factor is to create special places, where things can be different.

5:04Skip to 5 minutes and 4 secondsWhere things create surprise and delight, and also serve functions that were previously not seen, not even conceived, because there are things that happen today that didn't exist in the past. And that includes some of the major buildings that had to be, for example, big enough to take the contemporary workplace environment - much bigger than ever before. And how do you place those? Where do you place them to achieve the most useful outcome and minimise negative effects of the new scales of business that are required today. >> JAMES WEIRICK: The contrast in scale in relationship to the type of development that was likely on the site was controversial from the outset.

5:48Skip to 5 minutes and 48 secondsAnd so a competition was held in 2003 and it was under the auspices of the design excellence provisions of the City of Sydney's planning controls. And I think it was really the first time that those controls were used for a large scale urban site as distinct from individual buildings. So it was a controversial decision. But the building owners at the time, who of course were Fosters - the CUB company - and in association with Australand at the time, they agreed to holding a design excellence competition. Well, the brief for the competition had been prepared by Philip Thalis of Hill Thalis.

6:28Skip to 6 minutes and 28 secondsAnd of course he brought to the site his approach to urban design based very much upon the studies of urban form. And what is certainly distinctive about this part of Sydney is that there are two grids - which meet at Broadway - the grid of Ultimo and the grid of Chippendale. And they're offset by about 20 degrees. And so Philip thought that the open space which would be required for this new community should really be oriented north-south and take up that angle of difference between the two grids. And so the competition really called for a network of a grid of streets plus a north-south park, which was basically triangular, and resolving the difference between the two grids.

7:21Skip to 7 minutes and 21 secondsThe other issue of course was to mediate the scale of the new development to Chippendale. And to, of course, have a presence on Broadway. The scheme that won was by Alec Tzannes and in association with Philip Cox. And they, again, questioned the brief and rejected the idea of a north-south park and proposed the idea of an east-west park on the southern part of the site against the Chippendale community. And the jury was totally convinced by this. What this did was immediately give to the people of Chippendale a park that was part of their community as well as being a park for the new community, instead of an internalised park that would only be for the luxury development.

8:13Skip to 8 minutes and 13 secondsIt also set up a different experience of a park in relationship to how people live. Because a north-south park, for example like Wynyard Park in Sydney, is really a lunchtime park. But this park is for a community that needs it in the morning and in the afternoon. And so a park which is oriented east-west gets that type of sunlight and will administer for that type of everyday life. Of course, the challenge to the Cox-Tzannes solution - or the as we can call it - was that what would be the scale of the buildings to the north? How can you make sure that those buildings do not completely overshadow the park itself?

9:02Skip to 9 minutes and 2 secondsWith these many layered reasons, it was a bold decision I think, on the part of the jury, to reject the brief, or to accept the critique of the brief, and to award the first position in that invited competition to the Alex Tzannes and Philip Cox, Sue Barnsley team.

Story of city making and remaking

Cities naturally grow and change over time. In this video, Emeritus Professor Alec Tzannes discusses the story of city making and remaking with a focus on the process that drove the initial masterplan design for Central Park.

Alec retained an academic role of Dean of UNSW Built Environment (2008 - 2016) while Director of Tzannes Associates, where he worked as both an architect and urban designer. These professions will be explained in more detail in later weeks. In collaboration with another architectural and urban design firm, Cox Group, and Sue Barnsley, a landscape architect, a masterplan proposal was produced that ranked first in the Central Park competition. The masterplan development process involved working within frameworks created by city planners, followed governance rules and considered the site’s history as well as the public interest. 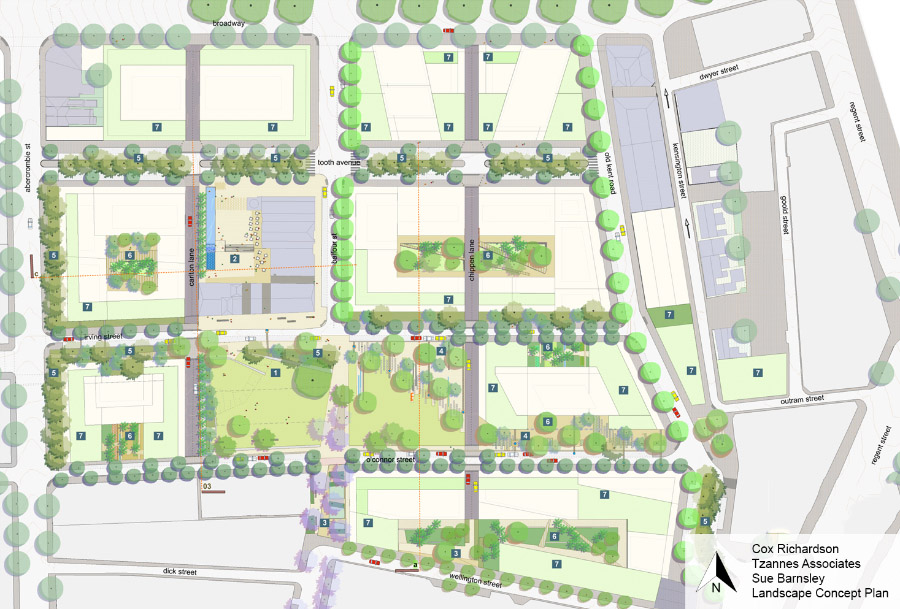 The story is augmented by Professor James Weirick, who discusses the competition brief and the evaluation of the Cox, Tzannes and Barnsley entry. In addition to his academic role as Director of Urban Development and Design at UNSW Built Environment, James has been involved with multiple committees that have guided decision making around the nature of Sydney’s development. James explains how Central Park is at the intersection of two grid typologies, which is shown in a resources document.

James was a member of the City Gateways Committee, established by the City of Sydney Lord Mayor in 2002 to look at new approaches to the expanded city as proposed by the state government. In addition, he was on the Design Review Jury Panel that evaluated and ranked the Central Park masterplan competition entries. Currently, James is a member of the Sydney Design Advisory Panel, an independent group of experts that support the City of Sydney Council in improving the quality of private and public urban design and development.

The Cox-Tzannes masterplan was the initial proposal for the site that underwent multiple iterations before being approved by NSW Department of Planning in 2007. After the purchase of the site by Frasers Property, Dr Quek hired Foster + Partners to revise the Cox-Tzannes masterplan. This amended masterplan was approved by the NSW Department of Planning in 2009. See the Central Park timeline infographic for more information.

See the infographics for further comparisons between the Cox-Tzannes masterplan and the amended masterplan by Foster + Parners.