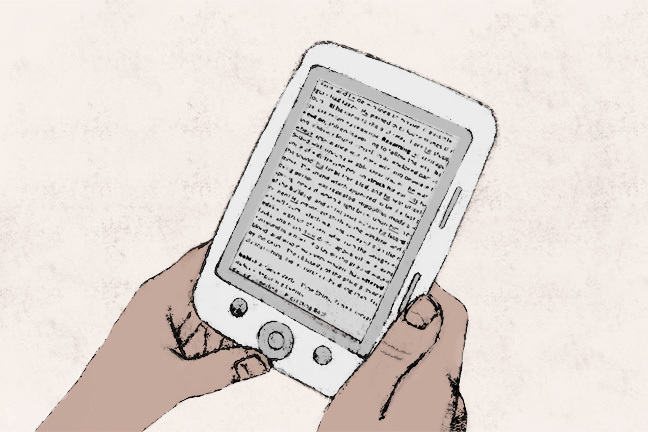 With an increasing number of texts being read online or as ebooks, reading habits have changed substantially over the last three decades. In what way do these digital texts and technologies affect our reading processes? Do our brains respond differently when we read on paper than to words on screen?

Since the 1980s studies from various research fields have focused on that question. In his useful survey of a variety of studies on the topic, Ferris Jabr notes that most of the research conducted before 1992 concluded that ‘people read slower, less accurately and less comprehensively on screens than on paper.’ However, more recent studies suggest that even though most people still prefer paper when reading intensively, ‘attitudes are changing as tablets and e-reading technology improve and reading digital books for facts and fun become more common. In the U.S., e-books currently make up between 15 and 20 percent of all trade book sales.’

Nonetheless, laboratory experiments suggest that the missing tactile experiences of screens and e-readers impair the navigation of longer texts and thereby negatively affect reading comprehension. Screens also tend to make greater demands on our mental resources, thus slightly diminishing our ability to remember what we have read. Other research has shown that people often approach on-screen texts with different attitudes than paper, namely ‘with a state of mind less conducive to learning.’ Jabr cites Maryanne Wolf of Tufts University to this effect: ‘There is physicality in reading, […] maybe even more than we want to think about as we lurch into digital reading – as we move forward perhaps with too little reflection. I would like to preserve the absolute best of older forms, but know when to use the new.’

To understand how reading on paper differs from reading on screens requires insight into how the brain interprets written language. As Wolf explains, some of the regions in our brains that are activated in the reading process are those that are specialized for object recognition. This is reflected in the fact that characters were shaped like the objects they represented in some of the earliest forms of writing. For that reason, to an extent, individual letters are still cognitively processed as physical objects. This may help explain why the human brain tends to perceive texts as a kind of physical landscape. ‘Both anecdotally and in published studies,’ Jabr writes, ‘people report that when trying to locate a particular piece of written information they often remember where in the text it appeared. We might recall that we passed the red farmhouse near the start of the trail before we started climbing uphill through the forest; in a similar way, we remember that we read about Mr. Darcy rebuffing Elizabeth Bennett on the bottom of the left-hand page in one of the earlier chapters.’

In most cases, print books offer a much more conspicuous topography than ebooks. ‘Turning the pages of a paper book is like leaving one footprint after another on the trail – there’s a rhythm to it and a visible record of how far one has traveled. All these features not only make text in a paper book more easily navigable, they also make it easier to form a coherent mental map of the text.’ Conversely, Jabr notes, on-screen texts tend to ‘interfere with intuitive navigation and inhibit people from mapping the journey in their minds […] Instead of hiking the trail yourself, the trees, rocks and moss move past you in flashes with no trace of what came before and no way to see what lies ahead.’ Clearly, the different materialities and tactilities of different texts make a difference.

Such findings suggest that there are very good reasons for not abandoning print. Yet as we have seen in the opening paragraph of this article, technological progress is likely to result in more user-friendly reading devices that will narrow the cognitive gaps between analog and digital reading. Very likely, people’s changing reading habits and changing attitudes toward etexts will further close those gaps. Another caveat is in order: most of the studies Jabr cites zoom in on the reading of longer literary texts such as novels; we cannot assume that studies of other textual genres such as scientific articles, which require different forms of cognitive responses, yield the same results. More generally, for scientific forms of reading, the searchability of etexts and users’ ability to cut and paste, offer decisive advantages.

Finally, while the lack of page numbers and the dearth of dependable editions render most ebook versions of literary texts useless for citation by professional readers such as literary critics, the searchability of various plain text formats is a major perk. In fact, since around 2000, a whole new type of professional reading – distant reading – has emerged that depends and thrives on the ready availability of searchable etexts. This will be the subject of our Week 5.

Jabr, Ferris. ‘The Reading Brain in the Digital Age: The Science of Paper versus Screens.’ Scientific American, April 11, 2013.

Wolf, Maryanne. Proust and the Squid: The Story and Science of the Reading Brain. New York: HarperCollins, 2007.

Understand the importance of copyright and learn its history, from the Renaissance to the Internet, with this free online course.