0:02Skip to 0 minutes and 2 secondsYour life is full of data. As you commute to work, you might be streaming music, scrolling through Twitter, getting updates on the weather, and sharing pictures of cats on Instagram. All of this digital information is, in essence, a series of ones and zeros. How does this [set of ones and zeros] become this [cat picture], or this [Tweet], or this [sound wave]? To find out, let's explore the history of digital media and how computers have come so far using mere ones and zeros. Computers receive, manipulate, present, and store data. But how do they do it just by using electricity? In our online course, How Computers Work, we explain that at their basic level computers are built from switches.

0:51Skip to 0 minutes and 51 secondsThese switches can either be on or off,

0:54Skip to 0 minutes and 54 secondswhich corresponds to numbers in binary: one and zero. Each one or zero state in a single switch is called a bit, which is the smallest piece of data a computer can store. Because you can get billions of switches onto a single circuit board, computers are able to use billions of bits to represent more complex data, like songs, text, and images. But how is information converted from a physical form into digital bits? Over the last 25 years, the analogue technologies of music, games, and film have all been digitised. These older electronics use analogue signals, which constantly change to represent the data they sent. Old broadcast televisions used a signal with variable wave height to represent sound and images.

1:45Skip to 1 minute and 45 secondsBut because of variations in these waves, small interferences could cause static. [STATIC BUZZING] To reduce interference, computers can represent media in a numerical format by converting these waves into bits of data. This reduces interference and results in better quality sound and images. Later in this course, you'll learn more about media computation and data representation. You'll take part in activities like making your own image filters and decoding messages. But first, think about how data is brought to life for you every day. Think of the phones, the laptops, TVs, radios, and other computers that surround you and share one or two examples of the data you see represented in your everyday life in the comments.

These days, our lives are extremely data-rich: everything we see and hear from a computer is made up of data. For example, today on my way to work, I was listening to music while looking at my Twitter feed and and a picture of my friend’s cat on Instagram. All of these things — music, text, and photos — are essentially just series of ones and zeros. At the very basic level, this is what all digital information consists of.

So how do ones and zeros become music, social media messages, or images of cats? To begin to answer this question, I will take you on a short tour of the history and meaning behind data and digital media to give you an idea of how we have come this far with mere ones and zeros.

Computers were built for the purpose of processing data to turn it into information. Information is closely related to data; the main difference is that data is a formalised representation of something which, when given context or when analysed, becomes information. So data is a more abstract term than information.

In this course we are mainly concerned with how data is represented by computers, and not with how computers process and create information. This is an important distinction, as the aim of this course is to help you understand the formalisations and codes that computers use to bring data to life. Essentially, you will learn to understand things from the point of view of a computer — things that you see, hear, and take for granted in your everyday life. This knowledge is very relevant to many aspects of computer science theory.

A computer is designed to do a number of things with data: + Receive data + Store data + Manipulate data + Present data

This all happens internally within the computer. So how do computers receive, store, manipulate, and present data just by using electricity? In our course How Computers Work we explain that computers are made up of a number of switches that can be either on or off, and these states correspond to the binary representation 1 (on) and 0 (off). Electrical current flows through the switches, and if you add more switches, you get more ones and zeros. Here is an example of how this works:

Each 1 (on) or 0 (off) state in a single switch is called a bit, which is the smallest piece of data a computer can store. If you use more switches, you get more bits; with more bits you can represent more complex data like the music, text, and image I talked about earlier. Billions of switches fit onto a single circuit board, and computers bring data to life by working with these bits.

During this course, we will look at the processes computers use to turn these bits into things you can see and hear. The first step is to understand how information is converted from a physical format into a digital one that can be represented by bits. This process of conversion is called digitisation.

To understand digitisation, let’s look at how much technology has developed in the last 25 years. Multimedia technology and the internet have transformed us into a digital culture. For example, this is technology that was popular 25 years ago in 1993, compared with current technology: 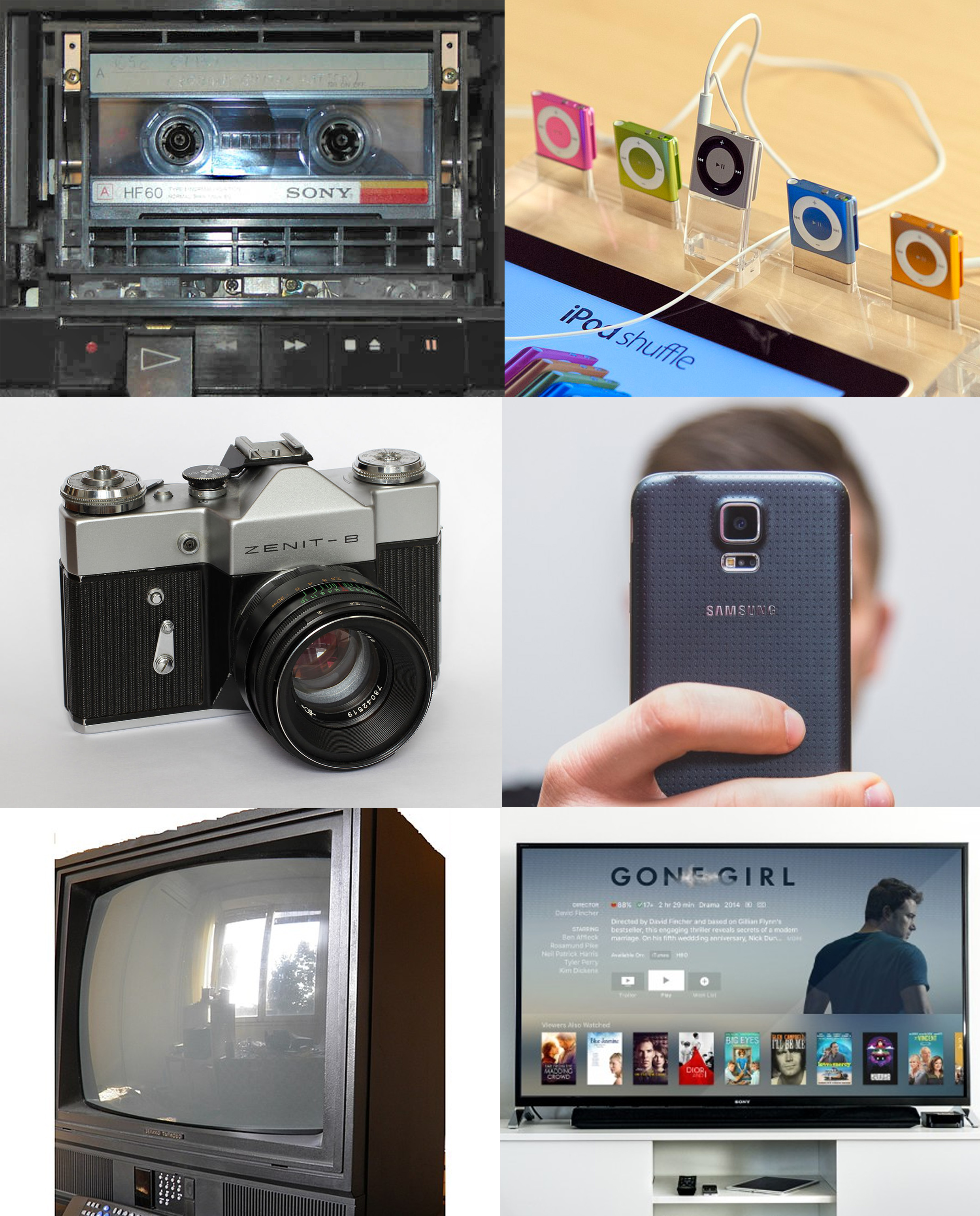 Today, most forms of mass media, television, recorded music, and film are produced and distributed digitally, and they are now converging with the internet and World Wide Web to create the digital mediascape we experience every day. Here are a few interesting facts about the digitisation of media:

In the pictures above, the examples of popular technology from 1993 are analogue, and the examples from 2018 are digital. We will go through the differences between analogue and digital in more detail later on. For now, to explain how digitisation has progressed from 1993 to today, I’ll give you a quick overview of analogue and digital technology.

Like this mercury thermometer line, analogue signals can take a continuous range of values to represent data, and this range can be visualised. On the other hand, a digital thermometer shows values in discontinuous steps, for example tenths of a degree.

Old broadcast televisions serve as another example: these TVs use a signal with a continuously variable wave to represent sounds and visuals.

Because variations in these waves are so small, the wave forms can be interrupted by interference, which causes things like static sound and snow visuals. To reduce interference, computers can convert the waves into ones and zeros (or bits) as single pieces of data. Using bits instead of wave forms reduces the effects of interference and results in better quality sound and visuals. Computers therefore represent media in numerical format, and this has had a large, and growing, impact on what we see and hear in our everyday lives.

This week we will dive deeper into the mathematics and basic computing processes underlying media computation and data representation.

Now you have seen some examples of how data is represented, think about the data that is brought to life for you every day through your phone, laptop or desktop computer, and all the other computers around you, like digital displays on your daily train ride, your smart TV at home, or the digital radio in your car.

Pick one or two examples of data you see represented in your everyday life, and share them in the comment.