0:02Skip to 0 minutes and 2 seconds You can convert analogue sounds into digital sounds by a process called sampling. This involves taking lots of individual measurements, which can approximate the form of the entire sound wave. Let’s look at how this would work for a simple sound wave. In order to represent how the signal changes over time, samples are taken at equally-spaced intervals. The number of samples taken each second is known as the sampling rate, which is measured in kilohertz. 1 kilohertz equals 1,000 samples per second. Common sampling rates are 44.1, 48, or 96 kilohertz. So a sampling rate of 44.1 kilohertz means that we take 44,100 samples per second.

0:51Skip to 0 minutes and 51 seconds Now, this many samples are needed to make sure that we capture the entire frequency range of human hearing. But how is this data stored? Now, this vertical line represents one of the times a sample is taken. The height of the signal represents the voltage from the microphone. But you can’t simply store that data, because the analogue signal is continuous. In theory, no number of bits is enough to store that data accurately. Instead, a sampling resolution is chosen. Now, this determines how accurately the signal level is represented at this time. For example, 3 bits can represent eight different levels. Now when the sample is taken, the level the signal is closest to is recorded.

1:40Skip to 1 minute and 40 seconds Now, this method of taking a point on a continuous scale and choosing a value for that point is called quantization. Even though there is a difference between the measured value and the stored value, using more bits means that we can increase the sampling resolution and get closer to the original signal. 16 bits of data gives a sample resolution of 65,536 levels. But using 24 bits increases that resolution to over 16 million different levels. Quantization is performed each time the signal is sampled, generating a series of binary numbers. Now, these binary numbers represent the height of the wave at different times. This binary representation can then be edited, modified, or used to reproduce the sound.

As I described in the previous step, a computer records sound by converting an analogue electrical signal into a digital signal. This involves taking lots of individual measurements to approximate the form of the entire sound wave; this process is called sampling.

Let’s look at how this works for the electrical signal produced by a very simple sound wave, represented as a sine wave of the voltage change over time. 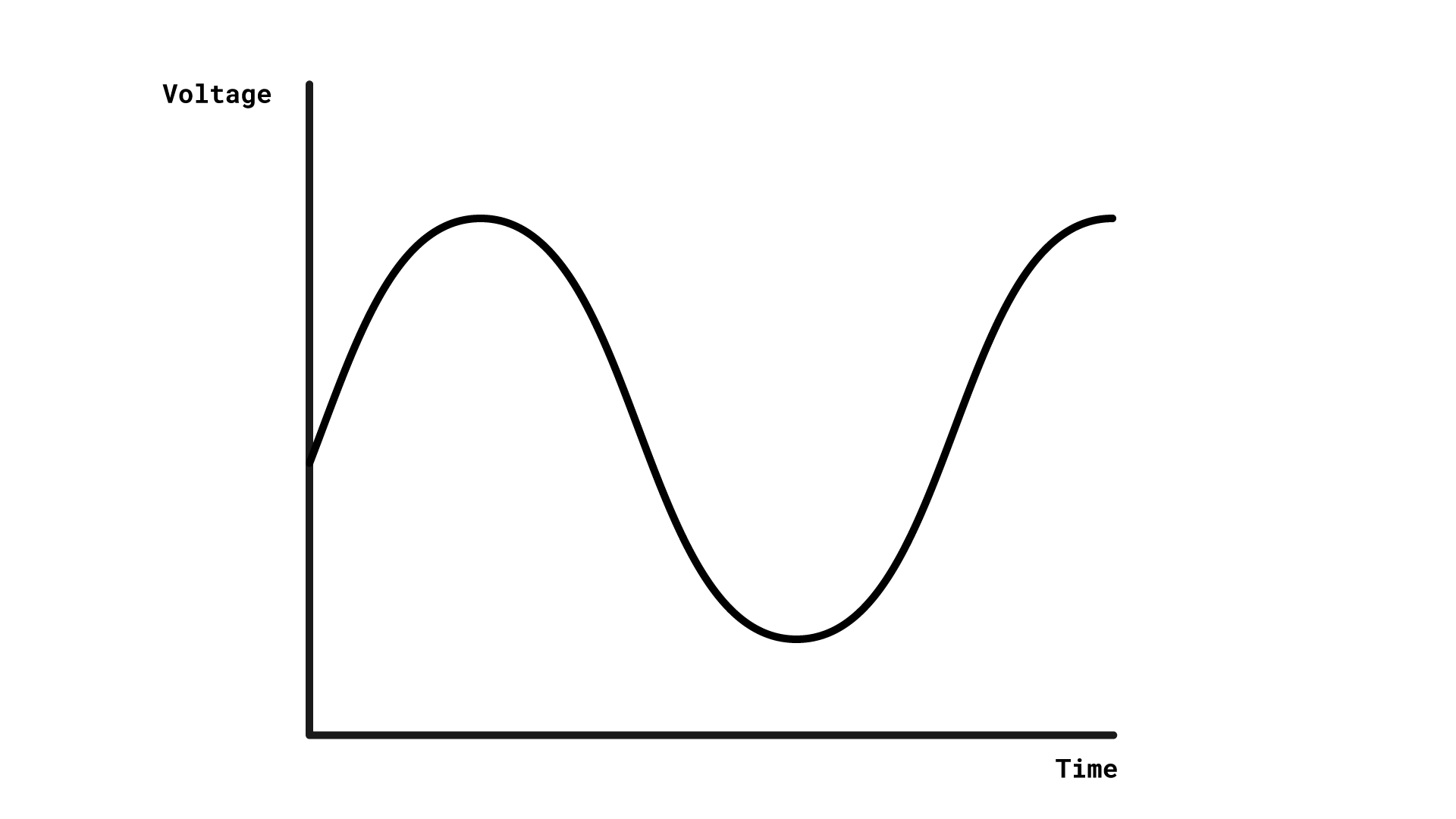 The computer samples the microphone’s electrical signal at lots of different time points, with the same interval between each time point and the next. 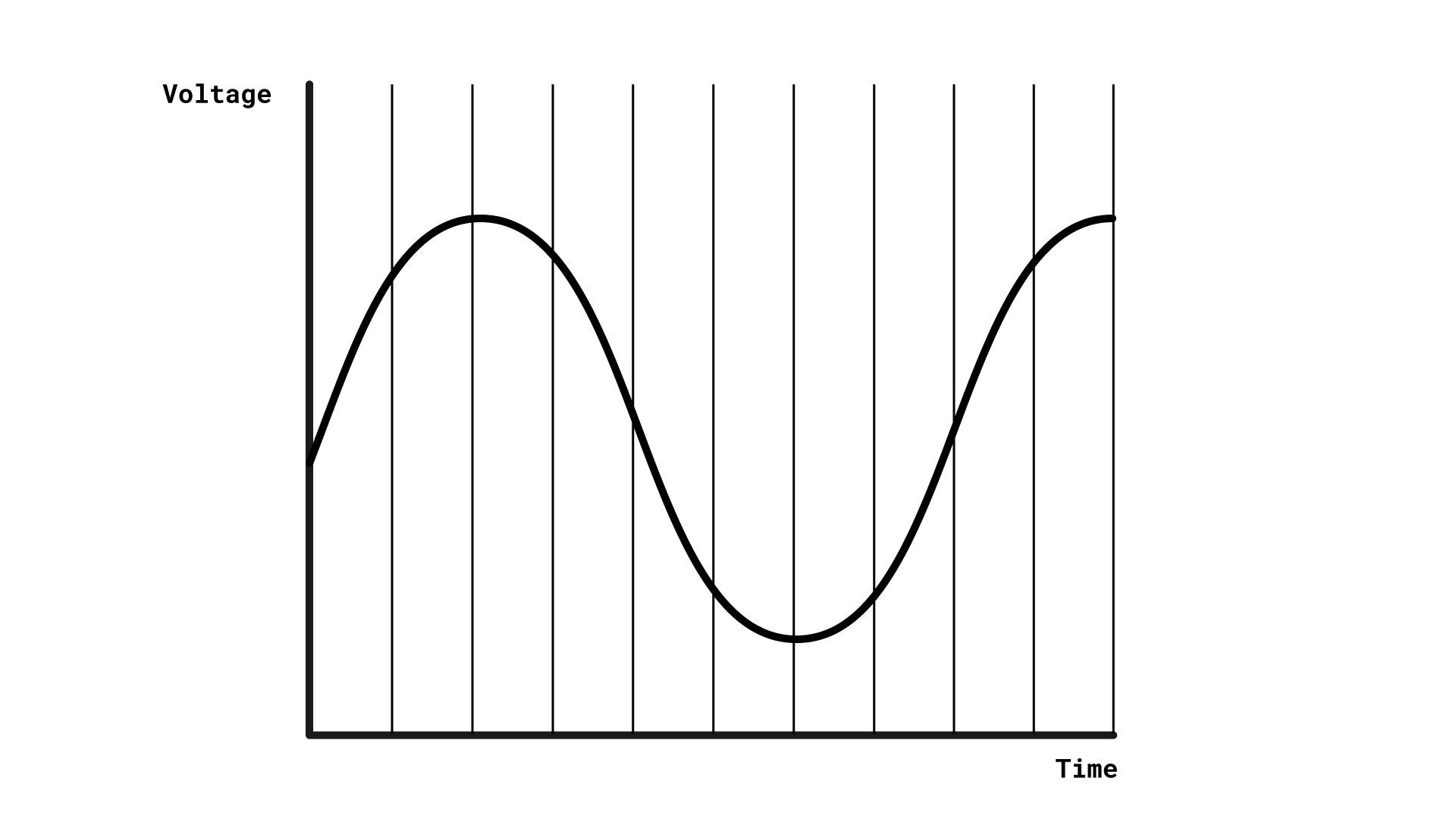 Let’s look at one sample the computer takes: 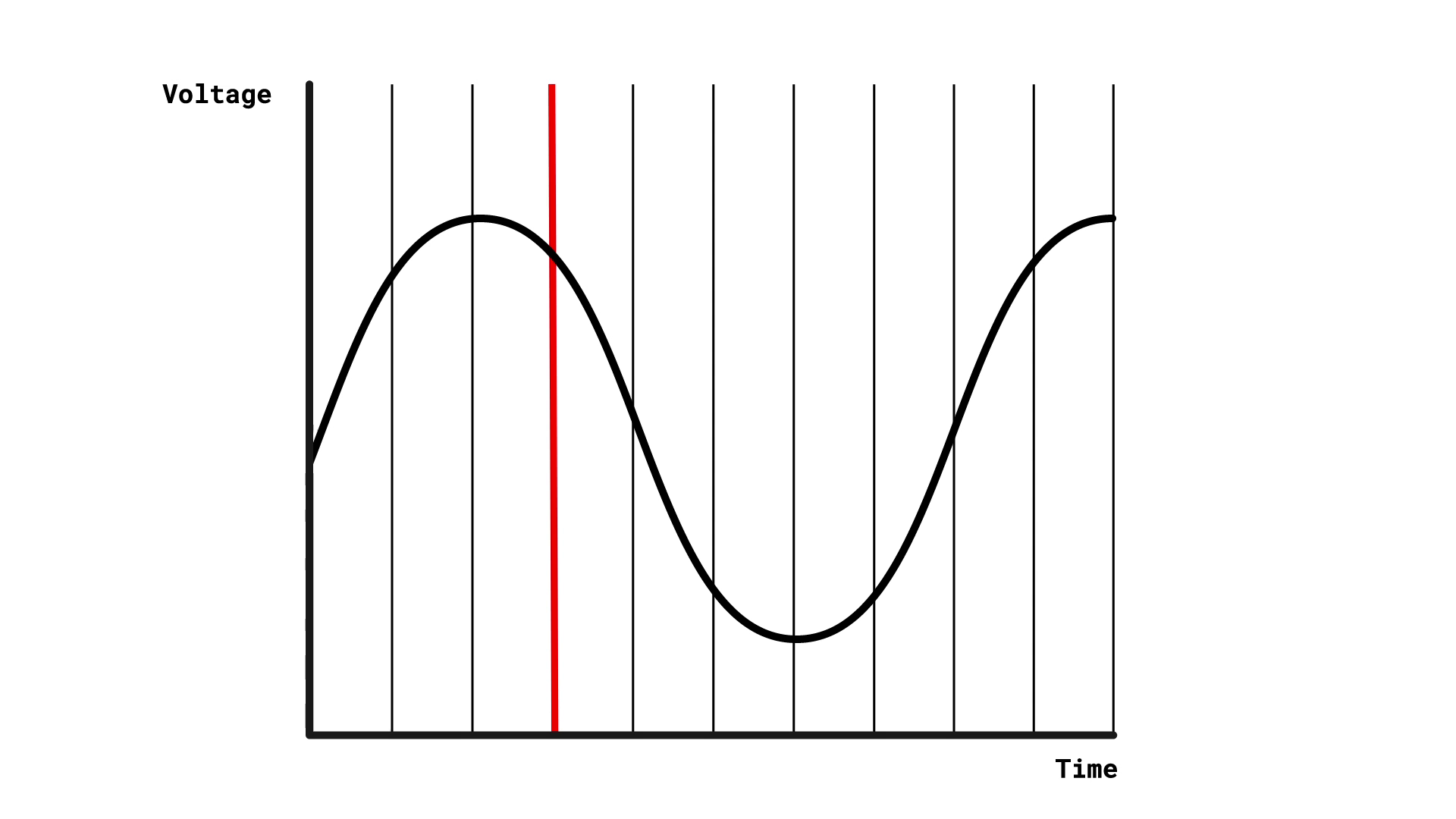 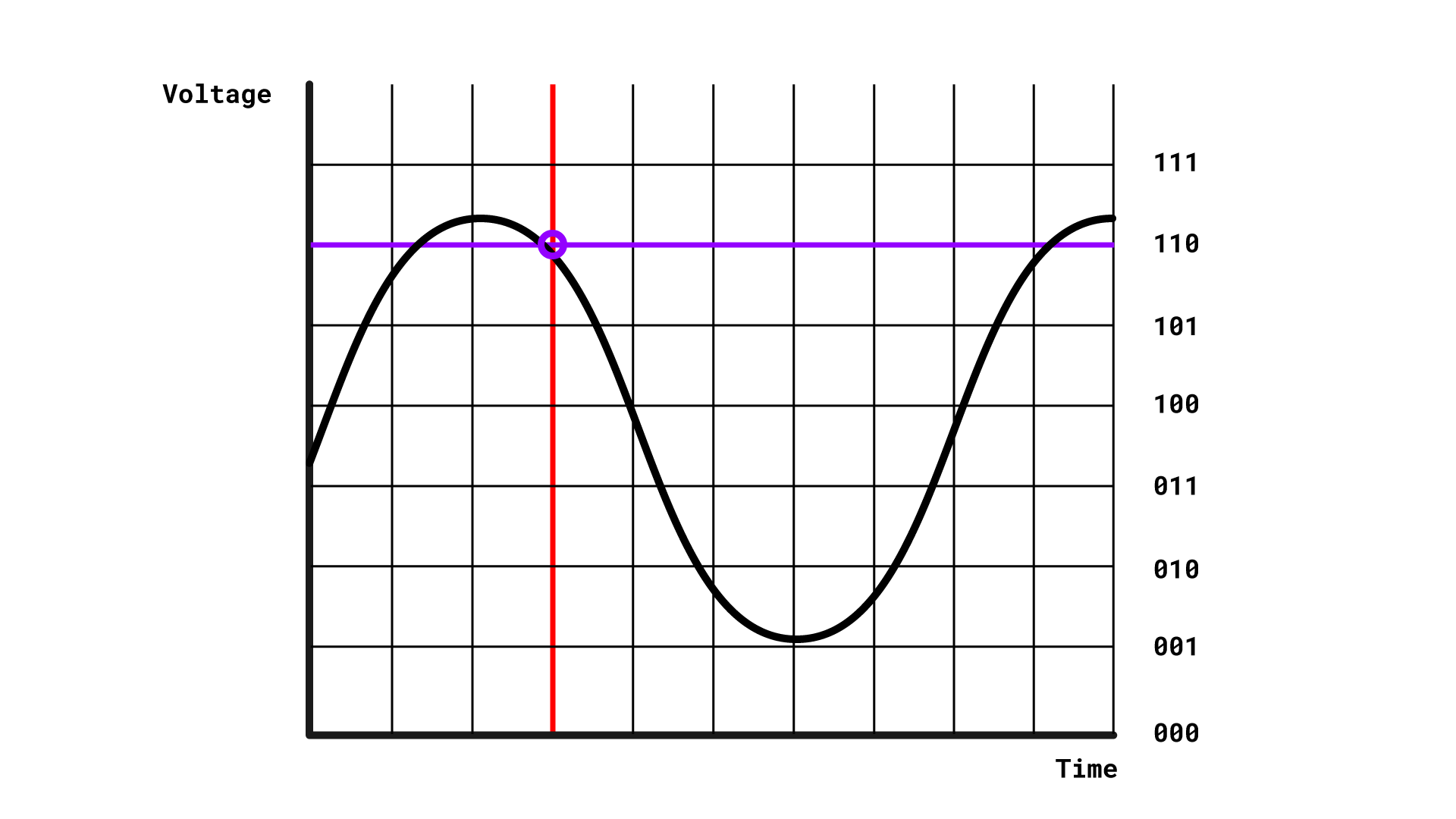 Representing a point on a continuous scale with a discrete value is known as quantisation. Although there is a difference between the measured value and the stored value, a high enough sample resolution (using more bits) lets the computer get very close to the actual signal level. It’s quite common to use 16 or 24 bits, allowing the computer to represent 65536 or 16777216 different levels.

Quantisation affects sound recordings in ways that you’ve probably encountered: it can cause distortions. The sample resolution that is set for a recording process determines a maximum quantisation level. If the volume of the sound that is being recorded goes above this level, the signal becomes “clipped”, which means the recording will sound distorted.

The computer performs quantisation each time it samples the signal from the microphone, and by repeating this process, it produces a series of binary numbers that represent the height of the wave at many different time points. 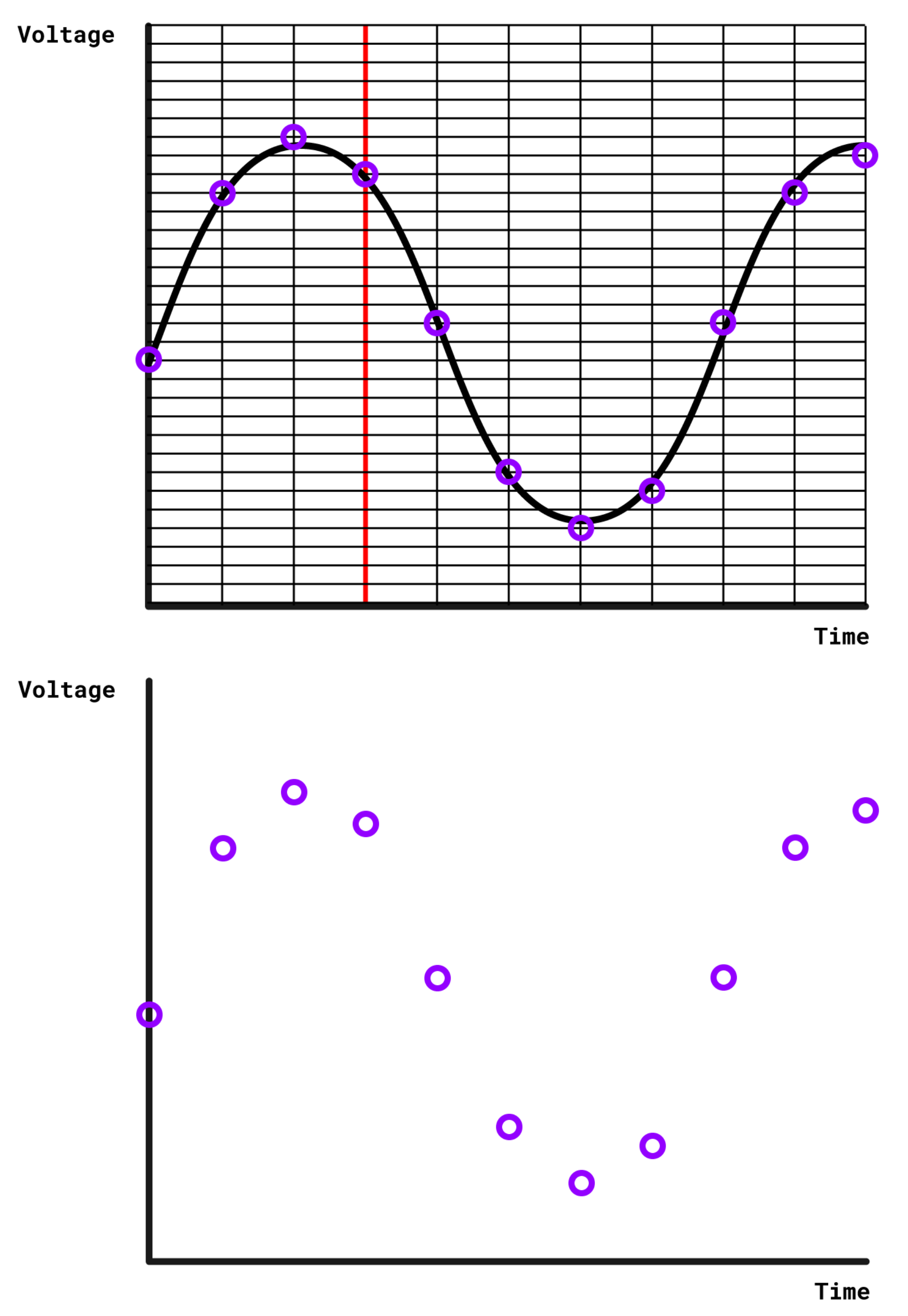 The computer stores stores this binary representation as a file and can use it to edit, modify, or reproduce the recorded sound.

You’ll learn more about the nature of sound files in the next step!