This content is taken from the Coventry University's online course, Research for Construction Management. Join the course to learn more.
View course
2.6

Every research has a philosophical underpinning, and no research will take place within a philosophical vacuum. Let us now examine some of the more common paradigms and ask how they define the research approaches that are taken.

In a broad sense, positivism is a philosophical ideology that adheres to the ‘factual’ knowledge gained through measurements and observation. According to Creswell, it promotes the idea that:

Scientific knowledge is derived from the accumulation of data obtained theory-free and value-free from observation. This suggests that anything that cannot be observed and thus in some way measured (that is quantified), is of little or no importance.

Bryman and Bell define positivism as:

… an epistemological position that advocates the application of the methods of the natural science to the study of social reality and beyond.

Knight and Turnbull (2008: 70) argue that positivism regards all knowledge as tied to observational forms of verification and methodologically founded on scientific experiment. One could argue that construction management as a discipline is founded on science. However, its operation revolves around humans, and so in broader terms it is also human driven. Positivism is also associated with other terms, namely ‘postpositivist’, ‘empirical science’ and ‘postpositivism’ (Creswell 2011).

These are related philosophical ideologies that promote the idea that people are deliberate and creative in their actions and actively construct their social world. This approach considers the dynamic and changing nature of the society and understands that there could be multiple interpretations of an event, shaped by the individuals’ historical or social perspective. Such situations need to be examined through the eyes of participants rather than the researcher (Cohen, Manion and Morrison 2011).

This is a philosophical ideology that is essentially practical rather than idealistic. For the pragmatist, there may be various or multiple ways at arriving at the reality. This can be through subjective or objective means, and some other times could require a combination of subjective and objective techniques (Onwuegbuzie et al. 2009).

Planning of your research project

Your choice of research philosophy is an important step in the planning of your research project as different philosophical traditions have implications for the choice of research method. For instance, positivism is often associated with an approach that tests objective theories through the examination of measurable variables (quantitative methods), whereas interpretivism or constructivism are associated with methods that investigate a topic in a more exploratory fashion without the constraints imposed by the rigid quantitative approach (qualitative methods). The more recent ‘mixed method’ approach combines both quantitative and qualitative methods. This combines the strength of the philosophical assumptions and theoretical framework of both quantitative and qualitative approaches to provide a rich understanding of a research problem.

Understanding how each of these [research] terms contributes to your research design will ensure the different components of your study are integrated. This, in turn, will enable you to answer the research question.

This figure illustrates the stages that you must consider when planning your research and shows how the different research philosophies relate to each of these stages. 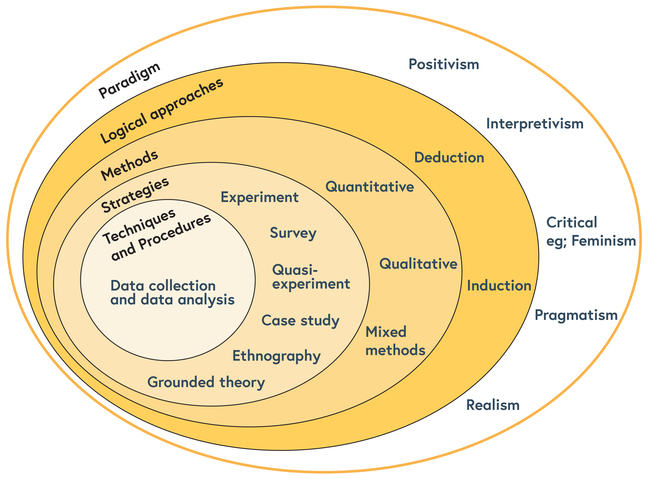 The research onion. A full figure description for this diagram is provided in the screen readable PDF provided in the download section. (Adapted from Saunders et al. 2015)

Paradigms in the construction industry

Construction management draws from both the natural and social sciences. Therefore, many different paradigms compete for methodological dominance (Knight and Ruddock 2008).

As construction management is a multi-disciplined function, however, an alternative perspective might be provided by adopting a multi-strategy approach that integrates quantitative and qualitative research (Bryman and Bell 2003; cited in Knight and Ruddock 2008).

In recent times, we have witnessed a paradigm shift where the mix of strategies have been applied to construction management research involving a combination of both science and social inquiry (positivism and interpretivism), yielding a complementary outcome.