This content is taken from the University of Wollongong's online course, Research Writing: How to Do a Literature Review. Join the course to learn more.
View course

Paragraphing is a key organisational structure in academic writing. Long or short, a good paragraph has a function. It’s a rhetorical move within a text, taking the reader from one idea to the next, and carrying the thread of an argument. In academic writing, in English, a paragraph typically starts with a claim, then explains or illustrates it, and provides supporting evidence of some kind.

One thing that can make student writing seem too ‘descriptive’ is a tendency to begin too many paragraphs with the names of other researchers, rather than a clear point about their work. Too much of that and the text loses any sense of having an argument. There’s certainly nothing wrong with some paragraphs beginning with “Smith & Jones (2015) found that…”, but there is a problem when you begin most paragraphs with the name of some other researcher. That approach gives your reader the impression that your review is all about them, and not enough about your interpretation of their work, and the development of your own argument. 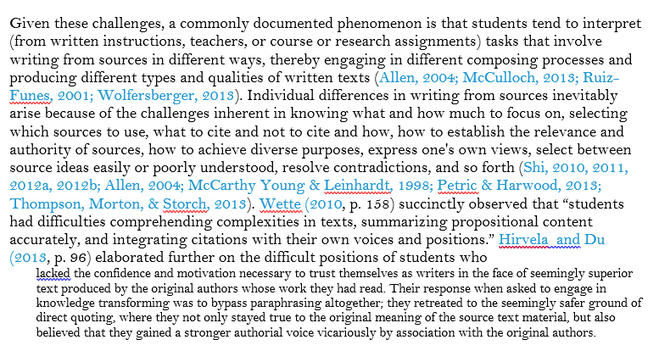 Professional writers understand that their purpose in writing a literature review is to present their perspective on the literature they are reading – not simply to present summaries of it. They develop an argument about the literature, referring to it in order to support an argument, or interpretation, that they have carefully developed.

Compare the following version, where the information is organised differently:

Even though the information being reported is the same, this version sends a rather different message. It presents the information as a list of sources and findings, without any comment from the reviewer. This approach to writing about literature is all too common in student work, and is a major weakness routinely picked up and commented on by research supervisors and teachers of academic writing. It is “just descriptive”, whereas the professional published version provides synthesis.

To avoid this problem, you need to recognise the role of the first part of a paragraph. The beginning of a text, paragraph or sentence signals to the reader what the coming message is ‘about’. We’ll consider this in more detail next week, but for now, notice that the original paragraph above begins by connecting the new part of the unfolding text with what has gone before it. “Given these challenges…” refers back to, and summarises, something said in the previous paragraph. Then a claim is made (“a commonly documented phenomenon is that…”), then the published research on that point is summarised, and then the references to sources are given. In this way, the writers have made their review ‘about’ the development of their own argument, rather than about their sources.

Research Writing: How to Do a Literature Review