This content is taken from the London School of Hygiene & Tropical Medicine's online course, Retinopathy of Prematurity: Practical Approaches to Prevent Blindness. Join the course to learn more.
View course
1.20 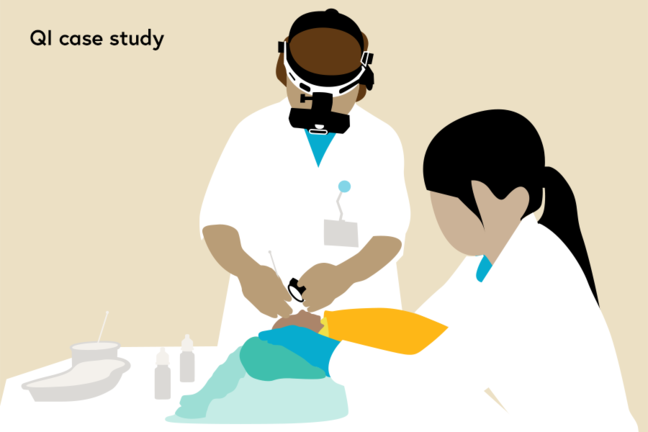 Each week we follow a hypothetical case study illustrating how a neonatal intensive care unit (NICU) team uses quality improvement (QI) and Plan-Do-Study-Act (PDSA) cycles to resolve problems with their ROP screening. The case shares many of the common challenges faced by NICUs around the world, especially in middle and low-income settings.

In this article we describe the early stage of the project where the QI team comes together to identify and analyse the issues with ROP screening in the NICU, and consider what action is needed.

A tertiary hospital in the capital city of middle-income country has a well-established and busy NICU which admits more than 100 neonates per month. The unit has:

The NICU staff are justifiably proud of their growing reputation and the ongoing improvement in their neonatal survival rates. However, the team also recognises the need to address concerns about managing comorbidities in the babies being cared for. Anecdotally, the ophthalmologist who visits the NICU on two fixed days per week to carry out ROP screening has raised a concern about the need to improve ROP screening uptake. She has particularly noted that babies are sometimes listed but do not come.

To address the ophthalmologist’s concern about ROP screening, leadership staff at the NICU form a quality improvement (QI) team. The members represent each aspect of care provided to preterm babies:

The QI team’s first decision is to take a three stage approach to the project:

The QI team begin by asking two main questions to gain information on how ROP screening is currently working at the NICU.

What are the current ROP screening procedures?

To answer this question, NICU neonatal nurse and neonatologist use process mapping to create flow charts which visualise:

Analysing the two flow charts highlights to the QI team that ensuring that ROP screening takes place, is not actively monitored in the NICU before babies are moved to the step down unit and then discharged.

Figure 1. Extract from the process flow chart on the discharge procedure for babies at high risk of ROP

How many babies are currently being screened for ROP at the NICU?

The administrator collects the available data on the existing ROP screening rates, that is the percentage of babies who are screened out of the total list of babies that require screening. This indicates that only 33% of babies who are listed for screening actually get screened before being discharged.

Reflecting on the information collected so far, the QI team decides that it is important to gather more data on two key questions:

Are the neonatal nurses aware of the need for ROP screening?

Resident doctors in the NICU and step down units take charge of distributing the questionnaire which all 40 nurses complete. The QI team analyses the answers and finds that the median score is 4/10.

How are parents being counselled about ROP at the NICU?

The head of nursing and one of the resident doctors carry out a qualitative survey with parents of preterm babies on their understanding of ROP. They find that parents are not engaged actively or counselled and are often just told that there is another test to be done:

The QI team review and discuss all the information obtained using a fishbone analysis tool (see figure 2 and summary table below). They identify several areas which could be improved.

Figure 2. Fishbone analysis of the problem, ‘Only 33% of babies at risk are screened for ROP’ 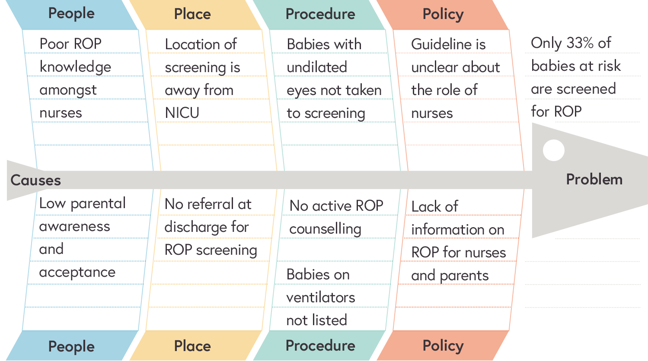 Summary table of the fishbone analysis

To decide what to focus on in the learning stage of the project, the QI team prioritises the identified areas for improvement by importance, feasibility and cost of undertaking an intervention.

After further discussion, the QI team concludes that, to improve the ROP screening rate from 33%, that they will test two priority quality improvement activities:

Now you have read the first part of the case study, what do you think are the strengths and weaknesses of the QI team’s proposal to carry out two interventions to improve the ROP screening rate? Should there be a different priority for action? Or would you change the overall intervention? Share your thoughts in the Comments.

We will return to this case study next week to share feedback on this activity before going on to explore what happens next as the QI team tests the proposed QI intervention in the project’s Learning stage using the PDSA cycles.