This content is taken from the London School of Hygiene & Tropical Medicine's online course, Retinopathy of Prematurity: Practical Approaches to Prevent Blindness. Join the course to learn more.
View course
2.14 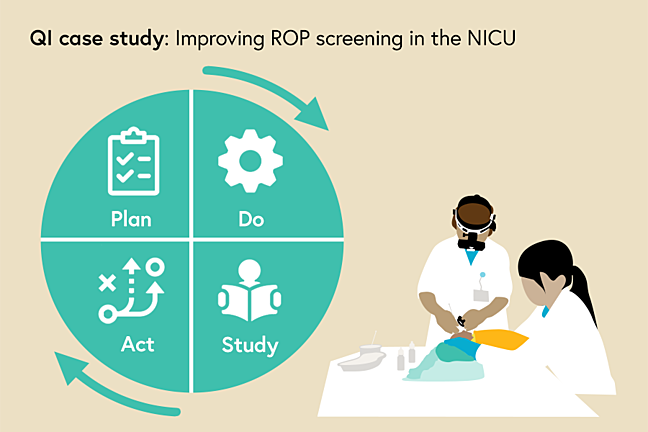 In this step we return to our hypothetical case study of a neonatal intensive care unit (NICU) team’s quality improvement (QI) project to resolve problems with their process for retinopathy of prematurity (ROP) screening.

Last week we followed the early stage where the QI team came together to identify and analyse the issues, and consider the action needed. The team concluded that, to improve the ROP screening rate from 33%, they would test two priority activities:

In this activity, we review what the team learned in the next stage of their quality improvement project, where they tested their intervention idea using a Plan-Do-Study-Act cycle. Below is the key information the team recorded at each stage of their PDSA using a template. If you are a healthworker you can download a similar PDSA template to use in your own setting.

Before you start, you might want to refresh your memory of this case study by revisiting step 1.20

Project aim (what are we trying to accomplish?): To improve ROP screening at the NICU.

SMART objective: To increase the ROP screening rate* from 33% to 60% by the end of the eight weeks.

* Note: The screening rate is the percentage of neonates screened out of the total number listed for first screening.

Description of the intervention

The QI team will create:

Two resident doctors to provide individual training to all 40 neonatal nurses on ROP screening over a two week period and on a shift basis, so as not to disrupt routine care. Posters on ROP screening will be displayed appropriately to remind nurses to discuss this issue with the parents. A neonatal nurse in the NICU and another in the step down unit will be assigned to 1) Collect feedback from nurses and parents, and 2) Supervise the implementation of the task to counsel parents and list babies for ROP screening.

What change should the intervention cause?

What improvement should the change lead to?

How we will know if the change does lead to improvement?

Plan of tasks to deliver the intervention (over eight weeks)

Task / person responsible / when and where to be done:

Was the cycle carried out as planned? Yes

What were the recorded data and observations?

What did you observe that was not part of the plan?

Did our results match the prediction? Yes

How do the results compare to previous performance?

What did we learn?

Decision is to: ADAPT the intervention

We will extend the project and run a new PDSA cycle which includes:

This team found that using PDSA helped them to improve their practice without the need for investment. In your view what are the strengths and weakness of the PDSA approach?