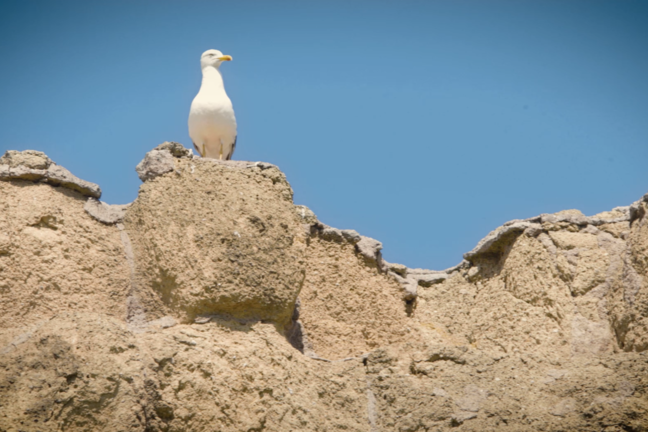 Walls are an impressive statement of a city’s power and wealth. Circling an entire urban area with a defensible wall circuit is always a major undertaking, requiring huge reserves of manpower, engineering expertise, and materials.

Many Roman cities had impressive wall circuits. Not far from Reading, for example, the Romano-British town of Silchester acquired an impressive stone and concrete wall and embankment, perhaps 6m high, around the third century AD. This wall would have been enormously expensive to build – requiring about 150,000 wagon loads of building stone, some of it brought in from quarries 80km away. Much of it still stands today.

Though walls could be symbols of urban prestige, they could also be considered an admission that a city faced a military threat. Rome had no functioning city walls during the centuries of her greatest power and prominence; they simply weren’t needed. The creation of the late imperial Aurelianic walls that we see in the video in Step 1.10, mighty as they are, can therefore be seen as a sign of a weakening empire.

Rome’s earliest wall circuit is traditionally called the ‘Servian Wall’ after the legendary king Servius Tullius (whose dates are conventionally given as 578 – 534 BC). The extension of the earliest hilltop settlements into a single urban community, attributed to Rome’s kings by Roman writers like Livy, included establishing a ceremonial sacred boundary called the pomerium, but also the construction of a physical wall circuit to guard against local rivals. Stretches of this 11km wall circuit survive, englobed in later buildings (including, surprisingly, the McDonalds restaurant in the basement of Termini railway station). 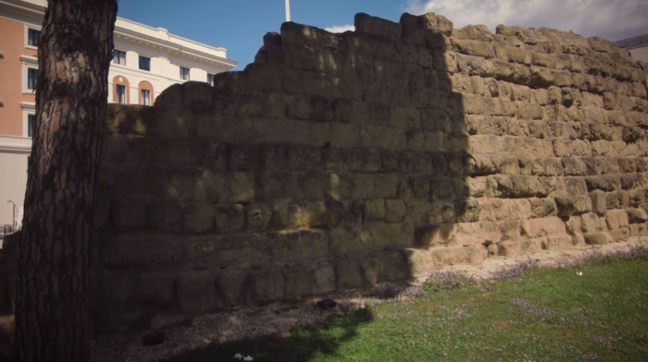 These archaeological remains must actually come from rather later than King Servius’ traditional sixth century BC date. The wall was built of a grayish tufa stone called Grotta Oscura which came from quarries near Veii, a city which Rome did not capture until 396 BC. The fourth century BC saw Rome threatened by invasion, so the construction of a wall circuit around that date would have been appropriate – but by then the city was ruled under a republican constitution, not by the kings who were traditionally believed to have built the walls. These walls were one factor that helped turn Rome’s great Carthaginian enemy Hannibal against an attempt to capture the city in 211 BC.

By the time Rome’s first emperor Augustus took power in the first century BC, this old wall circuit had fallen into disrepair; Rome was no longer threatened close to home. Roman poets of this date refer to the wall’s rampart as a place for strolling where entertainers and fortune tellers could be found, and the Greek writer Dionysius of Halicarnassus makes it clear that the city had expanded well beyond the confines of the old wall:

And if someone looking at these suburbs should want to estimate the size of Rome, he will be forced to go astray and will have no definite indication by which he can determine the point up to which it is still the city, and from where it begins not to be the city, as the built-up area is so woven into its surrounding countryside, that it gives to those looking at it the impression of a city stretching out forever. But if he should try to gauge Rome’s size by means of the city wall, which is hard to locate because of the buildings that are constructed over and around it in many locations, but which preserves traces of its old course in several places, and to measure it against the wall circuit which surrounds the centre of Athens, the circuit at Rome would not seem to him much larger than that.

Rome survived until the third century AD without any replacement for this redundant wall. Then threats from the north led the emperor Aurelian to start constructing in AD 271 the 19km circuit which now bears his name. By this date the Romans had a different building material to use, brick-faced concrete, which allowed them to build bigger, faster, and cheaper than they could using cut stone. Developments in military technology saw the inclusion of large gate towers and platforms for artillery weapons like catapults. The relatively hasty and economical construction of this wall circuit is shown by the way it ‘englobed’ earlier structures where it could, making them part of the wall rather than skirting them or knocking them down. The most conspicuous of these are a late first-century BC pyramid-shaped tomb near Ostiense station, and a small amphitheatre near the Sessorian palace complex on the south east edge of the city (where the wall circuit also cut a chariot-racing circus in half, putting it out of use). The nearby tomb of the baker Eurysaces, which we encounter later in this course, was also preserved inside a large gateway in the wall that was demolished – revealing the remains of the tomb – by Pope Gregory XVI in the 1830s.

The Aurelianic wall was upgraded in the fourth and fifth centuries AD by the emperors Honorius and Arcadius, doubling its height. However, even this mighty wall could not prevent the eventual sack of Rome by the Goths in AD 410, when they managed to enter by one of its great gates. 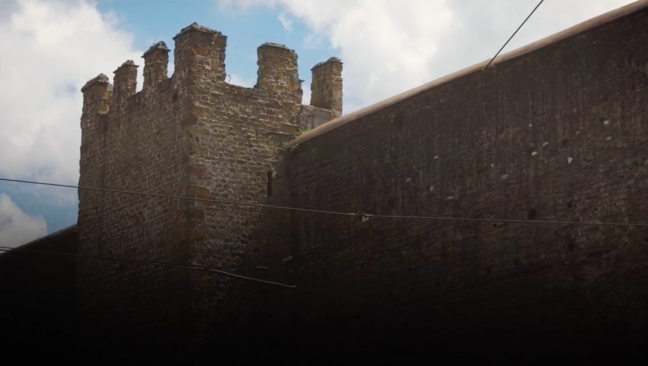 You can view part of this wall in our 360° panorama picture.

Since the concrete of which the wall was built from cannot be reused (unlike cut stone), and is hard to break up, large sections of this wall circuit still survive – indeed, parts of it were used defensively until as recently as 1870. Its circuit is easily visible in overhead shots of my digital model of Rome and often defines the ‘edge’ of the ancient city in maps and plans. However, as Dionysus Halicarnassus reminds us, and as I try to show in my model, it was not always that easy to say where the city ended and the countryside began: suburbs of lower density building, parkland, tombs, market gardens, farmland, and industrial sites like brickyards continued out for miles.