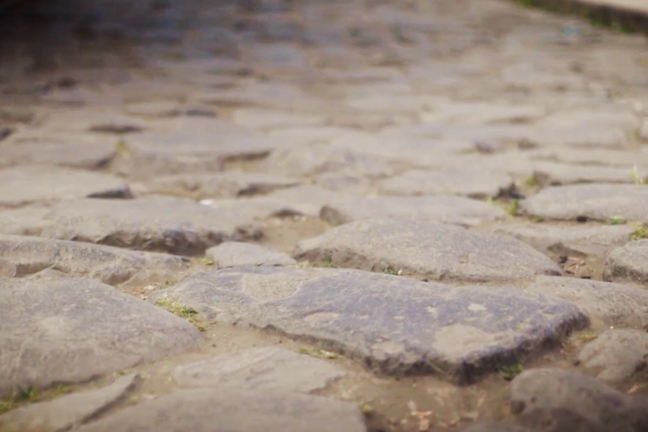 ‘All roads lead to Rome’: you saw in Step 1.4 that the advantages of the site of Rome included its excellent transport links by river and by land. It stood at a fording point in the navigable river Tiber, allowing it to control important, ancient routes in central Italy. As the city’s territory grew, good roads were a vital way of connecting it to the wider world.

In 312 BC, work on one of Rome’s earliest road building projects was commissioned by a Roman politician, Appius Claudius Caecus. The Via Appia named in Appius’s honour ran to the south of Italy.

Later magistrates added other great roads to the network, often in conjunction with programmes of city foundation and land surveying and distribution, adding up to a potent statement of Roman power over conquered landscapes (and people). The emperors followed suit, recognising the importance of good roads for controlling their empire and maximising the passage of goods and people.

Roman roads were famously straight, tending to disregard natural obstacles in their quest for a direct route. This preference for straight roads was also a reminder of the sophistication of Roman surveying, which could determine the right direction to aim, and of the ability of their engineers to create the necessary cuttings, embankments, terraces, and even tunnels. Roman roads were generally well engineered, with a cambered surface for drainage, compacted layers of gravel of different grades and – where necessary, and possible – paved surfaces.

There were quarry beds of hard-wearing volcanic basalt conveniently near Rome, which gives the ancient roads in and around the city the characteristic appearance that you see in the film. Drainage ditches, curbs, milestones and, in towns, pavements and stepping stones added further sophistication. The empire’s communications infrastructure included waystations, and even a network of imperial messengers to carry important official dispatches.

As you saw in the Step 1.8, emperors took pains not only to extend and restore Rome’s road network, but to let people know that they had done so by putting images and inscriptions on their coins (the coin of Trajan below was complemented by his commemorative arch at Beneventum, where his extension of the Via Appia began). This is a reminder of how important these road networks were as the arteries of the empire: as military highways, as avenues for trade, and as symbols of the Roman peace, the ‘pax Romana’, that kept the roads and seaways open for travellers. 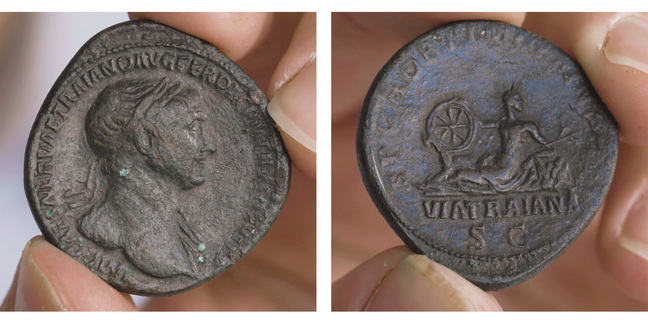 Figure 1: Coin of Trajan showing a personification of his new road, the Via Traiana. ©University of Reading

Traces of ancient road surface survive in and around Rome. Roads entered the city from all directions, taking where possible the easy route down the valley bottoms between Rome’s hill spurs. The Via Flaminia came in from the north, running straight down the flat Campus Martius towards the Capitoline (the modern Via del Corso, ending in the Piazza Venezia, follows its route); a bit further east, the Via Salaria (whose name suggests an ancient connection to a traffic in salt) ran from the Adriatic coast over 200km away. At the gateway now known as the ‘Porta Maggiore’, where we’ll encounter some aqueduct remains and the tomb of the baker Eurysaces later in the course, two major roads branched out to the south-east (making the spot a good site for the eye-catching tomb).

From the south the Via Appia ran up towards the Circus Maximus; today its suburban stretches offer a rather gentle landscape of tombs and catacombs, but it was an important thoroughfare. The road to the port town of Ostia ran out to the south west. Bridges led over the Tiber to the Transtiberim settlement on the right bank, the modern area of Trastevere, from where the Via Aurelia ran to Cosa and Pisa. 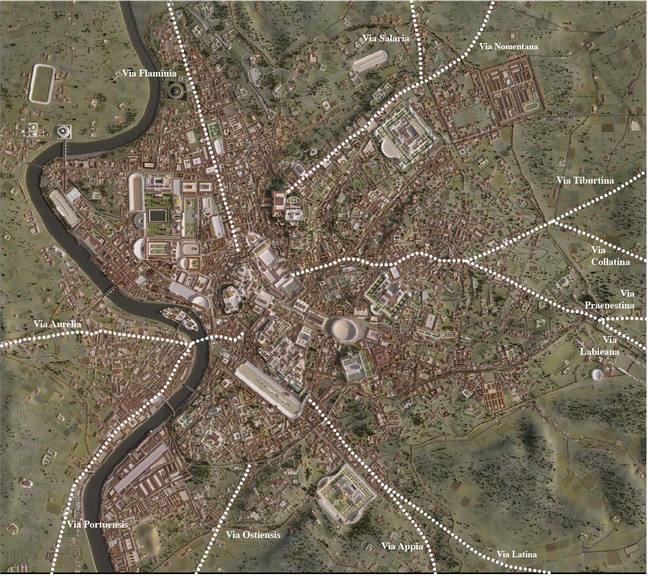 All these roads needed to get through gateways in Rome’s wall circuits to reach the middle of town, where a ‘golden milestone’ in the Roman forum, set up by Augustus, marked their symbolic meeting point and the heart of the empire. The first-century AD author Pliny gives us an idea of the extent of this urban road network:

If a measurement is taken from the milestone placed at the head of the Roman forum to each of the gates, which today number thirty-seven … it makes a total of twenty miles and 765 paces. To the edge of the built-up area, including the Praetorian camp, from the same milestone but through the city neighbourhoods, the total measure of all the roads comes to a little but more than 60 miles. If someone were to add in the height of the buildings, he would come to a very reasonable judgement and admit that the size of no city in the entire world could be compared to Rome.

Impressive as these roads were, there was no getting away from the problems of traffic. If you look closely at our films, you’ll see deep ruts worn in the hard paving stones by the passage of countless wagons. Ancient authors complain at length about the crowds, dirt, and noise of the city’s roads. Attempts were made by Julius Caesar and others to regulate the hours in which heavy wagons could use the city roads, restricting them to twilight and night-time movement, but lighter daytime traffic could itself be a problem. The big arterial roads (viae) could carry huge crowds of traffic; and as a traveller moved deeper into the city, narrower local roads (vicus, semita or angiportum) could bring hazards of their own.

Here the late first/early second-century AD satirist Juvenal complains about the din, and then about the difficulty of getting about the city on a tight budget:

The rumble of the wagons through the narrow winding of the streets, the cursing of the carter caught in a traffic-jam, would wrench a dozing seal from his sleep - or an emperor.

If the tycoon has an appointment, the crowd parts before him as he’s borne above their heads in a huge litter. There’s plenty of room inside: he can read, or take notes, or snooze as he jogs along - those drawn blinds are most soporific. Even so he outstrips us: however fast we pedestrians may hurry crowds surge ahead, those behind us buffet my rib-cage, poles poke into me; one lout swings a crossbeam down on my skull, another scores with a barrel. My legs are mud-encrusted, from all sides big feet kick me, a hobnailed soldier’s boot lands squarely on my toes . . .

We have been made aware of the issues with accessing our 360° panorama images and are currently looking into alternatives for hosting these images.

Feel empowered to protect your students by identifying and reporting signs of child abuse and neglect.