This content is taken from the University of Reading's online course, Rome: A Virtual Tour of the Ancient City. Join the course to learn more.
View course
1.14 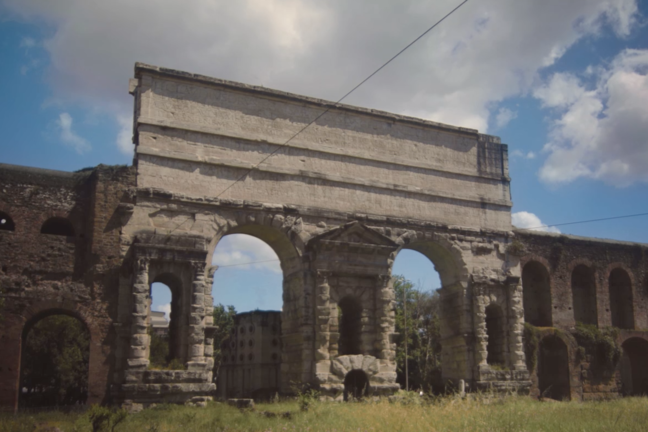 Let’s first take a closer look at the significance of the aqueducts to the ancient city’s success.

With such necessary structures carrying so many waters compare, if you will, the idle Pyramids or the useless, but celebrated, works of the Greeks!

This patriotic boast was made by a proud Roman who knew what he was talking about: Sextus Julius Frontinus, who was commissioner of aqueducts at Rome at the end of the first century AD. He wrote a handbook on the city’s aqueduct system which, together with archaeological remains, offers us wonderful insights into this impressive feat of engineering and organisation.

We’ll return to Frontinus’ testimony on the aqueducts, but first let us consider why they were built. It’s possible for cities to grow without aqueducts, and Frontinus tells us that Rome managed without aqueducts for the first 441 years of its history. Roman London never had an aqueduct, while Pompeii was only provided with one in the late first century BC. Towns without aqueducts took their water from a river, in Rome’s case the Tiber, or from wells (and we’ll see that early Rome had, if anything, a problem with too much groundwater). Cisterns can store run-off water funnelled in from roofs: many of Pompeii’s houses had this practical system, storing rainwater in cool underground cisterns to last through the dry Mediterranean summer.

However, there were limits to these sources, which were strained as a city’s population density grew. Wells gradually depleted the water table, and were no good if a dense urban population polluted the groundwater with sewage, rubbish, and the burial of the dead (which is one reason that Rome, like many cultures, insisted on burial outside the city). Roof-fed cisterns worked well for relatively low-density housing, but Rome’s multi-storey apartment blocks provided less roof area per person. And perhaps above all, wells and cisterns only delivered water by the bucketful. For the fountains and bathhouses that the Romans loved, flowing water was needed; and that (in age before efficient mechanised pumps) could only be delivered by gravity-flow aqueducts.

The principle was relatively simple: pure and abundant sources in the hills around Rome could be tapped, and their waters diverted into artificial channels running gently towards the city on a gradient designed to deliver them at a useful height, to flow around the city and feed street fountains, baths, and (for a fee) private houses.

You can view the remains of one of these aqueduct arches in Rome in our 360° panorama picture.

The engineering challenges were formidable. The cheapest route had to be surveyed very precisely: the gradient had to be steep enough to ensure a good flow (to stop the water dropping sediment which would clog the system), but shallow enough to avoid damaging surges. An array of settling tanks, distribution towers or castella, pipes, cisterns and fountains had to be built and, for maximum publicity value, richly decorated.

Pliny tells us that Augustus’ lieutenant Agrippa, as part of his aqueduct works in the late first century BC,

… having added the Aqua Virgo and repaired the other aqueducts, renewing their channels, made 700 basins, as well as 500 fountains, and 130 castella, many of which were richly decorated, and in these works he erected 300 bronze or marble statues and 400 columns of marble…

Moreover, since aqueducts could not readily be turned off, arrangements had to be made to ensure the new water could be drained into the Tiber, often flushing sewers or roads as it went. For most of its route an aqueduct could flow in a relatively cheap underground culvert, but as the land dropped away into the Tiber valley the aqueduct channels had to emerge from the ground, supported on tiers of arcades as they approached the city. Many of these arcades survive and form a spectacular sight and you’ll see from their coins that the Romans, like us, thought of these tiers of arches as a symbol of aqueduct engineering. 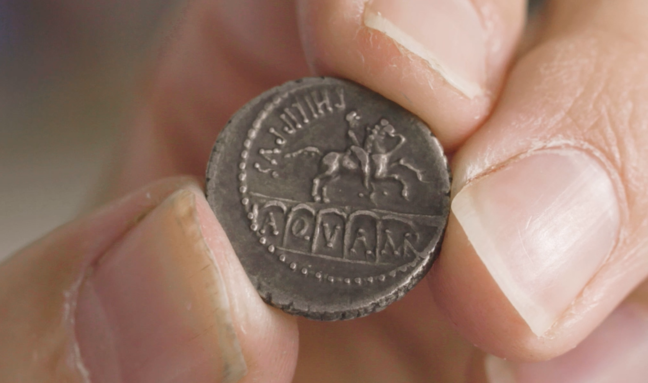 Figure 2: Coin from the late Republic, 56 BC, showing the arches of the Aqua Marcia. ©University of Reading

You can see such arcades near Rome on the drive in from Ciampino airport, near the main Termini railway station, and in a suburban area known as the ‘Aqueduct Park’.

Rome’s first aqueduct, the Aqua Appia, was built in 312 BC. This brought water in from about 16km away, ran almost all its length underground, and could only supply a small and low-lying part of the city. Nevertheless, its benefits must have been appreciated as Rome continued to add and upgrade its aqueduct network for centuries. Within 170 years an aqueduct (the Marcia) was built that tapped springs over 90km away, and ran for over 10km on arches; by the first century AD the entire city was served by aqueduct water, and by the early third century there were 11 major aqueducts (mostly running in from the Sabine Hills to the southeast, converging at the ‘Porta Maggiore’ gate). Counting the exact number of aqueducts, which split up into branches within the city, is difficult, and the exact location of some major lines like Trajan’s aqueduct, is not known. We do know that this aqueduct entered the city in Transtiberim, and it’s shown in my digital model running over the Tiber on a high arcade (after the proposition of aqueduct scholar Rabun Taylor); but it’s possible that instead it ran in a closed siphon under the deck of one of the river’s bridges. 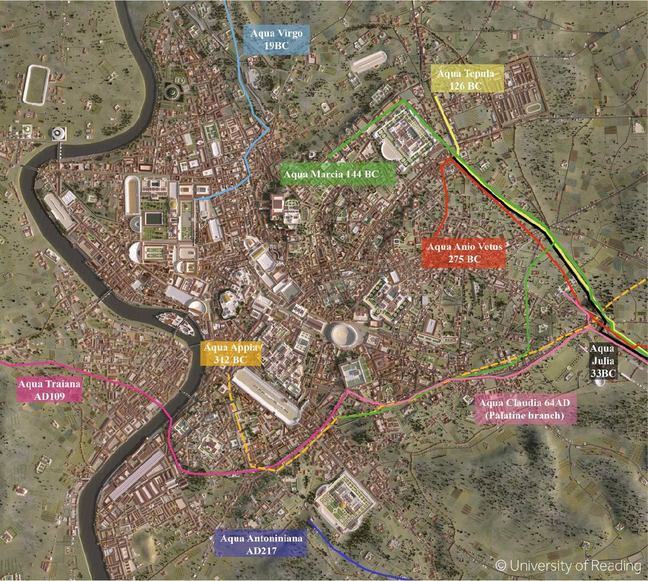 Nonetheless, we’ve a good idea of the sheer scale of the city’s water system from Frontinus and from other sources, including a fourth-century catalogue of city buildings which lists:

The total amount of water that this system could deliver is much debated. Frontinus gives us figures, but they’re difficult to interpret and disputed - around a million cubic metres per day are suggested. Some of this was for drinking, cooking, and washing; some served industries like cloth dyers, or irrigated market gardens and farm fields. Households could pay for a private line, but quite a lot was lost to illegal tapping or corruption (perhaps the installation crew could be bribed to fit a pipe of greater diameter than they were meant to):

If only we didn’t keep proving by infringements that all these [old abuses] were still going on: we have found irrigated fields, shops, apartments even, and bawdy houses all supplied by a constant supply of water.

At least some of Rome’s aqueducts seem to have survived the Goths’ cutting of the water supply in their sixth century AD siege. There were patchy repairs and references to aqueducts by early popes, but the system gradually fell out of use. By the twelfth century Rome – now shrunk down to just the area of the Campus Martius in the loop of the Tiber – was once again relying on river and well water. It wasn’t until the papal aqueducts of the sixteenth century that Rome became once again a city of fountains.