Bathing was a central experience of urban life in ancient Rome; the building of bathhouses all over the Roman world, from the forts on Hadrian’s wall to the cities of north Africa, shows how important it was. Apart from the chance to get (relatively) clean, Roman bathhouses offered places for sport and recreation, food, and conversation. 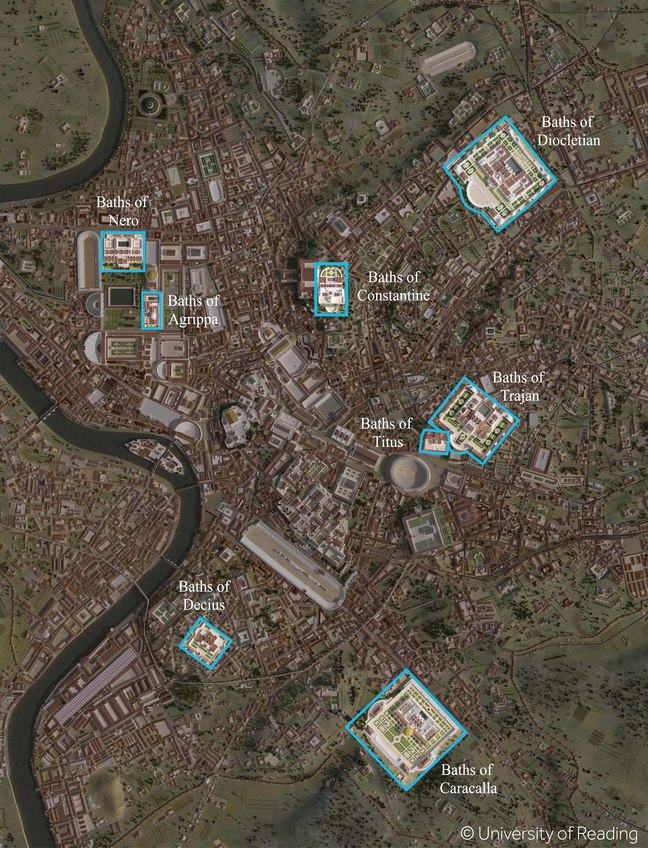 Our video talks for the most part about Rome’s great imperial public baths, the thermae, but it’s worth remembering that bathing establishments of all sizes, public and private, filled the city: the late antique catalogues of buildings in the city list over 800 of these smaller balneae. Twentieth-century excavations near Rome’s Termini railway station uncovered one of these, a smartly decorated middle-sized establishment in the midst of a dense run of city streets, only a few blocks from the enormous public Baths of Diocletian

It might be that there was room in the city for these different sorts of bathing establishment because they offered different experiences to their visitors. The largest imperial thermae offered a complete day out at no or little cost, with huge bathing halls, extensive gardens, art collections, statue galleries, and perhaps even libraries. The smaller balneae might have had a more familiar, neighbourhood feel and a regular clientele who could use them as a meeting place.

The mid-first-century AD writer Seneca helps bring a Roman bathhouse alive for us, when he complains about the noises that drift into his apartment from a nearby bath:

I have lodgings right over a balneum. So now imagine for yourself the all the different sounds, which lead me to loathe my own ears! When strong men are exercising and their heavy hands are throwing lead weights about; when they are either working hard, or else pretend to be working hard, I can hear their grunts; and whenever they hold their breath and then let it go, I can hear their wheezes and heavy breathing. When I notice a lazy fellow, content with a cheap oiling and rub-down, I hear the crack of the masseur’s hand striking his shoulders; the sound changes according to whether the hand hits flat or hollow. … Add to this the quarrelsome type, and arrest of thief, and the man who likes to hear the sound of his own voice in the bath. Now add those who jump into the swimming pool with the din of splashing water … now think of the thin and strident voice of the hair-plucker, which he uses to get noticed, continually calling out and never quiet unless he is plucking hair and making someone else yell instead. Now the varied cries of the cake-seller and the sausage-seller and the confectioner and all the food vendors, selling their wares with their own distinctive cries.

The popularity of bathing, and the arrival of the aqueducts delivering huge volumes of water, gave Rome’s emperors the opportunity to develop luxurious bathhouses. Beginning with the first-century BC Baths of Agrippa (the remains of whose domed hall are seen in the video), successive Roman emperors built ever larger and more elaborate bathhouses: the bathhouse proved the ideal space to satisfy the Roman love of flamboyant architecture, monumental symmetry, coloured marble, flowing water, and artworks. 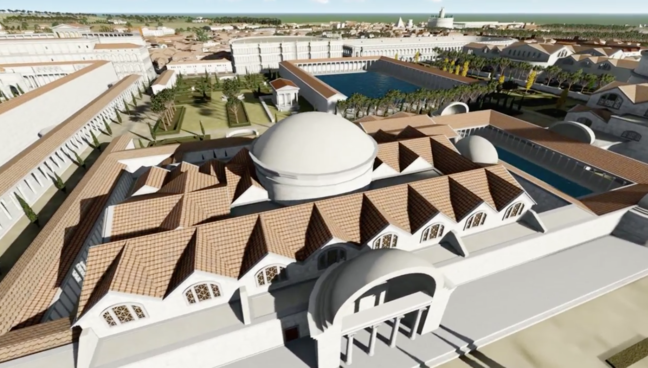 Figure 2: A digital reconstruction of the Baths of Agrippa. © Dr Matthew Nicholls, University of Reading, 2017

The earliest imperial bathhouses were built in the Campus Martius, an area long associated with leisure, and were immediately popular. Nero’s sumptuous bathhouse of the mid-first century AD has left only a few clues to its presence, as we saw in the video. As the Roman poet Martial asked:

What was worse than Nero? But what could be better than Nero’s Baths?

Emperors Titus and Trajan followed with bathhouses on the Esquiline Hill, including the one whose remains we show in our video. Early in the third century AD Caracalla built enormous baths to the south of the city, whose striking remains are well worth a visit. Diocletian at the end of the third century AD and then Constantine in the early fourth added baths of their own. A glance at the map suggests that by that point a ring of thermae served every quarter of the city.

These thermae were magnificent buildings. Roman concrete vaulted architecture proved ideal for the large, enclosed spaces needed, and their flair for practical engineering ensured that the baths were properly supplied by elaborate networks of cisterns, pipes, channels, and drains. The Baths of Caracalla has a huge subterranean level which housed drains, furnaces, underground roadways for the delivery of supplies. There was even a Mithraeum for bathhouse staff – an underground shrine for the group worship of the mysterious eastern god Mithras, whose followers often met in dark, cave-like spaces. The map shows that the great public bathhouses are all angled to point their warm rooms southwest, catching as much sun as possible to reduce their heating bills.

As we know, the brick and concrete cores of these buildings could be put up relatively quickly and cheaply, and the Baths of Caracalla – despite their stupendous size – took just six years or so to build. They were then ready to receive their rich decoration: slabs of coloured marble sawn fairly thin and attached to the walls with metal clamps; acres of mosaic on the floors (surviving well in parts of the Baths of Caracalla); marble columns in the larger rooms or the screen facades of the outdoor swimming pools; fine artworks (some of the finest surviving Roman sculpture, such as the Farnese Bull group, was found in bathhouse buildings); and (we imagine) decorative planting in the large areas of gardens.

Within the central bathing block were suites of rooms with heated floors and basins, generally offering a range of temperatures and an opportunity for a cold plunge (much like a modern sauna or Turkish bath). The great thermae often seem to have had double, symmetrical sequences of these bathing rooms. This may have allowed for bathing segregated by sex (various emperors, like Hadrian, legislated against mixed bathing), though the open architectural style and the meeting of the two circuits at certain points suggests that this cannot have offered an absolute division. Perhaps the symmetry arose instead from an architectural taste, or a reluctance to build some of the bathing spaces bigger than could readily be heated, or to allow one side to be shut down for maintenance while the other operated. 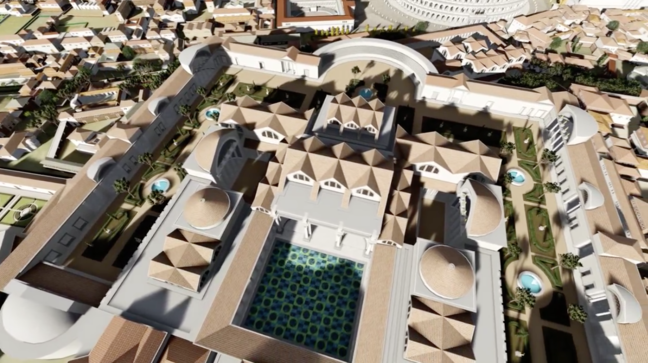 Figure 3: A digital reconstruction of the Baths of Trajan. © Dr Matthew Nicholls, University of Reading, 2017 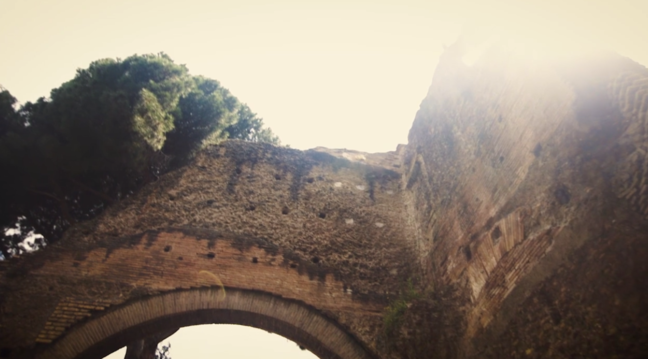 Figure 4: Remains of the Baths of Trajan in modern Rome. © University of Reading

Surrounding the central block at the Baths of Trajan, Caracalla, and Diocletian were large areas of garden space, with an outer ring or peribolos structure. This contained large halls which may have accommodated lecture spaces, covered exercise areas, sculpture pavilions, or even libraries. A strange verse inscription for a man calling himself Ursus (bear) claims a degree of fame for offering some sort of spectacle (‘the glass ball game’) at a series of public bath houses around the city, giving a glimpse of the world of entertainment that these spaces might have contained:

I am Ursus, the first toga-wearing Roman to play properly with a glass ball with my fellow players, to the great applause of the approving crowd, in the Baths of Trajan, the Baths of Agrippa and of Titus, and often in Nero’s, if you believe me: that’s me. Come together rejoicing, ball-players, and lovingly cover the statue of your friend with flowers, violets and roses and abundant leaves and vintage perfume…