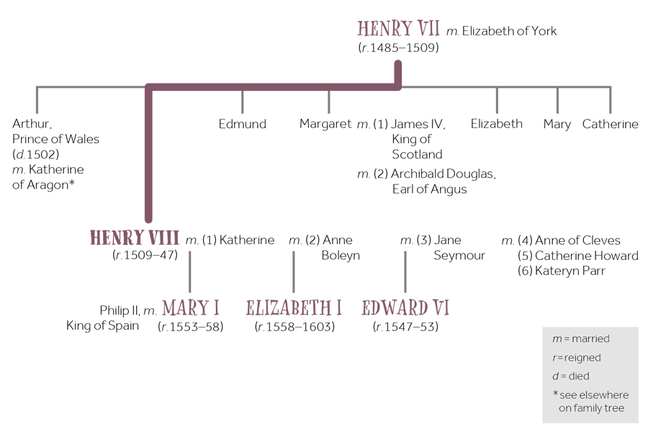 In this step we’ve provided a family tree for King Henry VIII, two of his six wives and his children. For those of you who aren’t familiar with the story, we’ve also included a brief summary of the events that led up to the christening of his only surviving son Edward VI.

For those of you already familiar with this story you may like to skip straight to the next Step but don’t forget to mark this one as complete before you move on.

Henry was prepared to go to great lengths to secure his succession with a male heir.

Henry is often best-remembered for his six marriages, and his break from the Catholic Church. But behind all of this lay his need for a male heir, who could continue his line.

In 1509 Henry married his brother’s widow, Katherine of Aragon. Katherine gave Henry one daughter, Mary, but despite numerous attempts, she failed to give him the son he so desired. When it became clear that Katherine would never provide a son, Henry petitioned for, but failed to obtain, a divorce from the Pope. Refusing to bend to Rome, a determined Henry engineered the creation of the Church of England and split from Rome. Now the figurehead of his own church, Henry was free to annul his marriage to Katherine and make the young, beautiful, Anne Boleyn his new queen. This marriage resulted in the birth of his second daughter, Elizabeth but no son.

Anne was eventually executed in May 1536 for treason. In the meantime, Henry had already begun to court the next of his wives. He sent gifts to demure lady-in-waiting Jane Seymour, lining her up as his future queen. Henry and Jane were betrothed on 20 May 1536, the day after Anne’s execution, and were married just ten days later.

In February 1537 the Queen’s pregnancy was announced. On 16 September she officially withdrew from court to await the birth. Jane’s pregnancy had been uneventful, however the birth was not. Jane’s labour lasted two days and three nights but she eventually gave birth to a healthy son on 12 October. Nearly 30 years into his reign, Henry’s long-awaited heir was here!

This was to be a bitter-sweet time for Henry. Jane was very ill from childbirth. It’s often been assumed by historians that Jane developed puerperal fever. However an alternative medical opinion suggests she might have been suffering from retention of parts of the placenta; a condition that could lead to serious haemorrhaging. Whatever the initial cause, septicaemia developed and Jane became delirious. She died just before midnight on 24 October, having been queen for just under 18 months.

We know from his correspondence with the King of France, Francis I, that Henry was grief-stricken:

Despite the tragic death of Jane Seymour, Henry finally had his desired male heir.

But let’s turn our attention back to happier times; the christening of Edward VI on the 15 October 1537, where we next pick up our story…

For those of you who are interested in finding out more about the background of Henry VIII and the English Reformation, we’ve provided some suggestions for further reading materials: