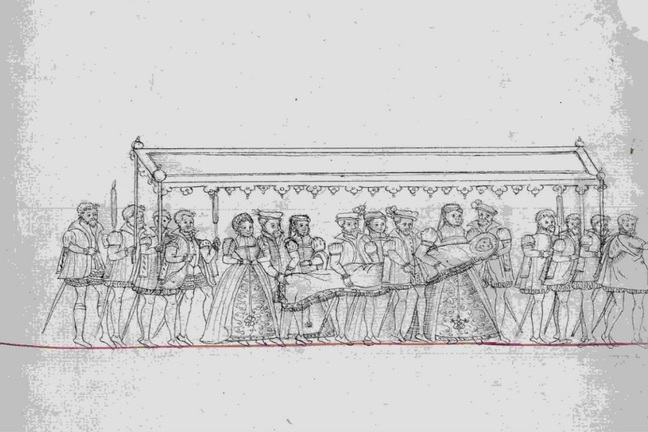 Part of a pen & ink drawing of the christening cortege, c1560

© The College of Arms, London

The christening procession of Edward VI

Finally Henry’s long-awaited male heir had arrived. The little Prince Edward would have meant much to the King, both politically, and personally. The christening advertised Edward’s legitimacy and confirmed Henry’s standing in the eyes of the world. When it came to making a statement about his power and status, Henry VIII didn’t do things by halves. What better occasion to mark than Edward’s christening?

Henry’s third wife, Jane Seymour, gave birth to Edward at 2am on the morning on the 12 October 1537. His arrival was greeted with national rejoicing, hymns of thanksgiving were sung in all the parishes of London. The celebrations continued far into the night with street bonfires and free food and wine. The birth of an heir to the throne was something to trumpet as loudly as possible.

This was a time for royal showmanship and Edward’s christening is one of the best-recorded events at Hampton Court in the 16th century. For us now, the christening highlights the King’s obsession with securing a male heir, and the lengths to which Henry was prepared to go: defying the Pope and creating the Church of England with himself at the head in order to divorce and remarry, and all the death, destruction and seizing of religious treasure during the Dissolution of the Monasteries. For Henry, the ends justified the means, and it’s possible that to him, the christening ceremony was a very public and extravagant way of proving he was right to inflict such upset on the entire country and those closest to him.

Edward’s christening took place on 15 October 1537, in the Chapel Royal at Hampton Court Palace, three days after his birth. It was an event filled with majesty and symbolism. Edward was taken in a lavish procession through the Palace’s State Apartments, through the Great Hall, to Base Court, through Anne Boleyn’s gate, and across the inner court to the Chapel Royal.

The event was probably organised by a committee. The Archbishop of Canterbury, Thomas Cranmer, was no doubt involved in the planning – he was also to be one of Edward’s godfathers – and Thomas Cromwell, the King’s Chief Minister almost inevitably had a hand in it too, as well as officers of the Royal Household. Although this royal christening was the first to be staged at Hampton Court, they had precedent to go by, as recorded in the Ryalle book which provided guidance of court and chapel ceremonial. The rituals of the ceremony would be very much like those of Henry’s own; but Henry would have spent as much money on it as he could, to ensure it was as lavish as possible.

The christening, the formal and ceremonial part of the day’s events, not only brought Edward into the new Church of England but also officially named him as his father’s heir. After the formalities, came the feast. The feast would have been a less solemn affair and guests would have enjoyed a vast array of opulent dishes, all of which would have demonstrated royal wealth, power and – with Edward’s christening – the longevity of the Tudor dynasty. This was certainly an event worth celebrating and outside the palace, great fires were made in the streets, banquets were held, cheers and celebratory gunfire could be heard day and night. Messengers were sent to all the estates and cities of the realm with gifts. Some of these gifts included;

The gyftes givyn by Lady Mary a Cupe of gold

The Duc of norff- lyke unto the arche Bishop of Canterbury

The gifts given by Lady Mary a Cup of gold

The Duke of Suffolk 2 great flagons (Jugs) and 2 great pots of silver and gilt.

© University of Reading and The College of Arms, London

Discover the incredible world of 'the Hobbit' as modern archaeological science uncovers secrets hidden in time.