0:15Skip to 0 minutes and 15 seconds My name is Glenn Gibson. I am a microbiologist and I am a member of the Food and Nutritional Sciences Department here at the University of Reading. And we’re in one of the labs at the University, which has lots of gut models in it. And what these do is simulate the digestive system. So they’re full of microorganisms. And we test foods in these models. We might make a model that is reflective of the infant, or teenagers, or adults, or elderly people, or people who have particular clinical states linked into their gut. And actually this particular model is being used by two researchers call Holly and Brodie.

1:39Skip to 1 minute and 39 seconds You can see through the vials it’s much darker here in the high protein diet. It’s quite likely that Henry VIII might have had a vitamin C deficiency as we think he’d have on this high protein diet and not consuming that much fruit. And any fruit he would have consumed would likely to have been cooked. And Vitamin C is a water soluble vitamin. So when it’s cooked, it’s just destroyed. The theory is that in Henry’s gut, he’s got too many of these bacteroides.

2:08Skip to 2 minutes and 8 seconds When they’re in the gut they’re beneficial to the host, but when there’s too many of them they can leave the gut, like through a rupture and travel in the blood to other places in the body and cause abscesses. So Henry had these leg abscesses. So we think the bacteroides they travelled in caused these leg abscesses. Nowadays in UK people are consuming 75 grammes of protein per day average. So we are having a high protein diet, even though compared to what we think is King Henry VIII’s diet, which is 226 grammes per day of protein. It’s still lower, but it’s already relatively high.

2:47Skip to 2 minutes and 47 seconds So this probably will give us a higher production of hydrogen sulphide p-cresol, indolic compounds, those co-carcinogens which is not very good.

How healthy was Henry's diet?

In this video, Professor Glenn Gibson, from the University of Reading introduces the artificial gut model that two of his students, Brodie and Holly have created to simulate Henry VIII’s digestive system.

The artificial gut models in Glenn’s lab are packed full of live bacteria from the human gut. Some of these bacteria are beneficial for health, some have a neutral impact and others are pathogenic (cause disease). Maintaining balanced populations of these micro organisms in the live, human gut is essential for our digestive health and the nutrients we consume play a key role in this. The artificial gut models provide an ideal opportunity for researchers to manipulate nutrients, under lab conditions, to see what impact this has on the balance of microbiota (all of the bacteria) within the human gut.

Brodie set out to investigate Henry’s diet and the impact this had on his health for her final year research project. As you’ve discovered in previous Steps, we don’t know for certain what Henry ate but for the purpose of this experiment, Brodie worked on the assumption that he consumed a vast amount of meat.

To test Henry’s diet Holly introduced a liquid medium, consisting of concentrated bovine protein, into the artificial gut model, equivalent to the high protein meals we think Henry enjoyed. But just how protein-rich would this meal have been?

The UK Department of Health’s Dietary Reference Value (DRF) recommends that we consume 55g of protein per day. In reality we tend to consume significantly more; 75g of protein per day, with 2.5 % of the population consuming up to 120g. The average worldwide protein consumption per day is 100g. Brodie’s research suggests that Henry may have enjoyed as much as 226g of protein per day – a whopping, 4 times our current recommended daily allowance!

The team knew that a high protein diet encourages the growth of negative bacteria. Holly and Brodie fed Henry’s artificial gut with its high meat protein diet every day for 4 weeks to allow it to stabilise; when they returned to analyse the ‘waste’ (stool) in ‘his colon’ at the end of the process, they expected to see increased levels of these pathogens.

Their predictions proved correct. They found a huge increase in pathogenic Bacteroides and sulphur-reducing bacteria in samples gathered from all three sections of the ‘colon’ within the artificial gut. They also found a significant. reduction in the number of Feacalibacterium in the same samples.

The graph below records the number of Bacteroides, Feacalibacterium and sulphur-reducing bacteria Holly found in samples taken from three areas of Henry’s ‘colon’ in the artificial gut: the proximal, transverse and distal colon.

The first three bars within each chart represent what we assume was the less protein rich diet of the Tudor commoners, whilst the second three bars represent Henry’s high protein diet. 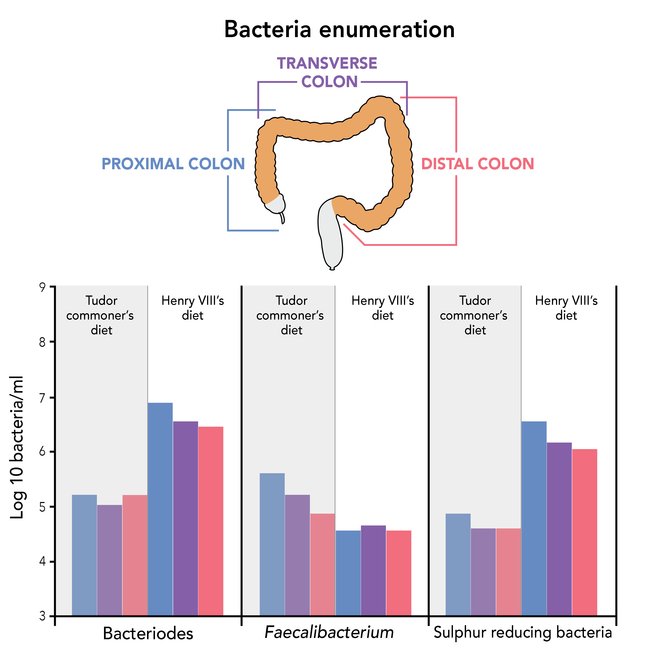 What do these results tell us about the Tudor king’s health? These pathogenic bacteria produce a cocktail of hydrogen sulphide (a gas with the distinctive smell of rotten eggs!), p-cresol, phenolic and indolic compounds that promote cancer (co-carcinogens). These high levels of harmful metabolites would have been bad news for both Henry’s colon and his general well-being. The reduction in Feacalibacterium would have also been detrimental. They produce butyrate, a metabolite with many associated health benefits so a reduced number of these ‘good’ bacteria would have been less healthy for the King.

This is the first time Glenn’s lab have used their artificial gut models to simulate history, although they once analysed coprolites (fossilised human faecal remains) to try and identify the bacteria present in the gut of our ancient ancestors!

More generally, Glenn’s research team use artificial gut models to simulate the gut of a wide range of age groups and conditions; from infants to the elderly and clinical states such as bowel cancer and Inflammatory Bowel Disease (IBD). They investigate how they might help improve the digestive and overall health of these various groups, through dietary change.

Holly, for example, is currently investigating the effect of probiotic supplements (healthy carbohydrates) on protein metabolism. Using the gut model, she has found a positive impact that suggests the probiotic supplements help reduce the number of harmful Bacteroids normally associated with the high protein diet we enjoy today. Her next step is to set up a human trial to test this further.

If you’d like to find out more, you may like to visit The International Scientific Association for Probiotics and Prebiotics ISAPP.