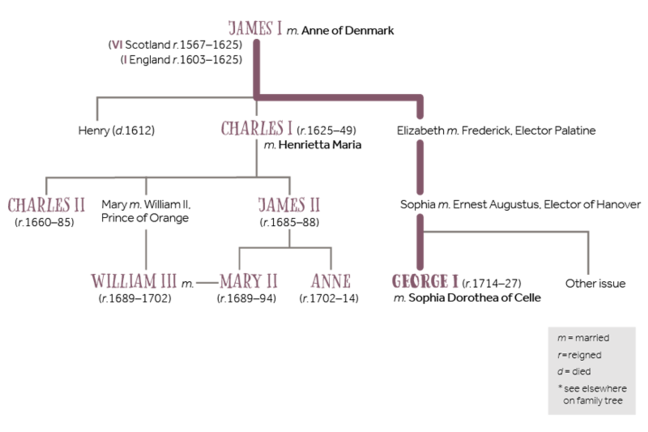 Family tree of George I

We ended Week 2 with an animated summary of how we got from Elizabeth I to George I, whose reign we’ll be focusing on this week. There has been a Civil War, a period of interregnum, the Restoration of the Monarchy, a change in religion once more, and now a new, foreign king has taken the throne.

In this step we’ve provided a family tree for the new Georgian dynasty, and for those of you who aren’t familiar with the story, we’ve also included a brief summary of the events that led up to George I succeeding his cousin Queen Anne.

A word of caution, we do start mentioning a lot of royal monarchs this week, many of whom are called George! If you’re confused about who’s who, we’ve included a complete family tree to help you.

For those of you already familiar with this story you may like to skip straight to the next Step, marking this one complete as you move on.

In the early years of George’s life there was no certainty that the family would be destined to rule England, and George was preparing to succeed his father as Elector of Hanover, an independent state in what is now present-day Germany.

But when he took the throne of England in 1714, in addition to Hanover, as George I (1660-1727) the Georgian dynasty was born. However, his succession was not without its challenges. This shy, socially-awkward king spoke little English, and he was unpopular with his new subjects, who were hesitant about a foreign king. In addition, his bitter ongoing conflict with his son and heir, George Augustus (the future George II) marred his rule.

George I was born 28 May 1660 in Hanover, Germany. His father was a minor aristocrat, but his grandmother was the daughter of James I and VI: King of England and Ireland as James I from 1603, and King of Scotland as James VI from 1567. It was through this maternal connection that George was able to claim the English throne, following the death of his second cousin, Queen Anne.

The death of William, Duke of Gloucester, Queen Anne’s last surviving child in 1700, meant the end of any direct blood line succession. A Protestant heir was needed, and Anne’s Hanoverian cousins fitted the bill.

On 1 August, Queen Anne died, leaving George to succeed as King of Great Britain and Ireland. From this point forward George dropped his German name (Georg Ludwig) and always signed himself as ‘George R[ex]’. However, more than a change of name was needed to win over his new subjects.

However, more than a change of name was needed to win over his new subjects. George arrived in England on 18 September accompanied by his son, a number of nobles, his half-sister and his mistress. These two women were rather cruelly nicknamed ‘The Elephant and The Maypole’. George’s new subjects also gave him the new nickname of ‘The Turnip King’, joking that turnips were the sole produce of his native Hanover. However, George’s wife, Sophia Dorothea of Celle, had been left behind in Hanover and imprisoned for adultery. This estrangement meant George’s queen never set foot in England and never saw her children again.

By insisting on keeping his own servants and entourage, instead of handing out plum jobs at court to English aristocrats, George soon ruffled a lot of powerful feathers. He spoke little English, instead conversing with his ministers in French and Latin, and he missed his beloved Hanover, returning there every summer.

To add to his prolonged absences, the King performed public duties with effort, he was never easy or animated in company, preferring close friends and lifelong servants. This, of course, didn’t go down well and added to the image of George as a ‘recluse’, an ‘outsider’ and a ‘foreigner’. In the early years of George’s rule, the new Prince of Wales, George Augustus, and his wife, Caroline of Celle Ansbach, took on this public role, and inevitably, formed a rival court. This brought tensions to crisis point between father and son, culminating with a massive row in 1717. It became clear that George I himself would have to become a much more public figure to compete with the glamorous Prince and Princess.

While at Hampton Court in the summer of 1717, the King began to dine in public every day, watched by visitors to court and joined on occasions by up to 50 guests. These guests included foreign ambassadors, nobility, and his British ‘gentlemen-in-waiting’. George also took to walking in the gardens with visitors; holding balls in the evenings several times a week (sometimes with a concert, and always with billiards and cards) and hunting regularly, which he combined with visits to country houses of the nobility. Just as Henry VIII had used food, feasting and entertainment as a sign of his power and kingship in the early 16th century, so too did George I in the early 18th; and Hampton Court played an important backdrop for both.

As we will go on to discover, Hampton Court had been ‘upgraded’ since the Tudor period and was, once again, a perfect setting for hosting royal occasions. George employed the architect Vanburgh to make even more improvements, including a suite of rooms for the Prince and Princess of Wales and he had Henry VIII’s Great Hall temporarily converted into a theatre.

George I continued to keep up his public presence in the following years and over the course of the summer of 1718, the celebrations at Hampton Court were even more lavish than they had been the previous year – there were more guests, more balls and more musicians. This was a period of luxury and lavish entertainment and George I’s court was at the heart of it, using both performative entertainment and food to make a statement about this newly-established royal family.

If you would like to find out more about the Georgian court and the royal family see the following for further reading materials: