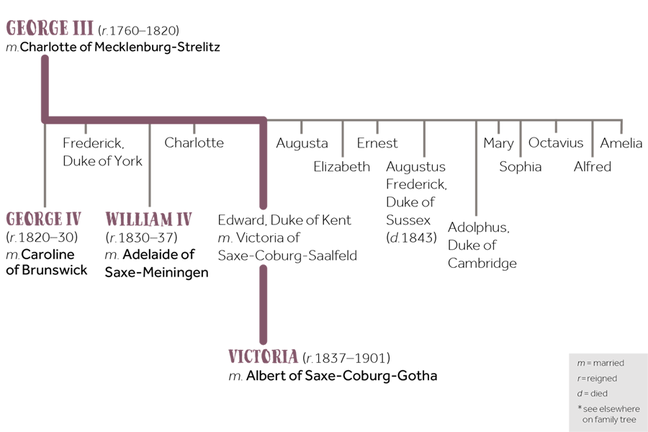 The family tree of Victoria

At the top of this Step we’ve included the young Victoria’s family tree before she had her many children. For those of you who aren’t familiar with the story of her childhood leading up to her 17th birthday, we also provide a brief summary in this Step.

If you’re already familiar with this story you may like to skip straight to the next Step, but don’t forget to mark this one as complete before you move on.

Victoria looked back on her childhood at Kensington as being utterly miserable.

The story of Victoria’s birth and early years is chaotic. Desperate for his royal baby to be born in England, the Duke of Kent begged and borrowed enough cash to drag his heavily pregnant wife and a significant entourage back from Germany, where they’d been living. He made it, and lived long enough to see his daughter born, be breast-fed (unusual in aristocratic circles at the time) and be weaned before he died. Victoria’s uncle, Leopold, widower of George IV’s only daughter and heir, Charlotte, funded the family for the next few years, as they took up residence at a bug-infested, draughty and ramshackle Kensington Palace. Far from being the well-cared for palace visitors come to today, it was described at the time as being in ‘a general state of decay’. Eventually, the Duchess of Kent would manage to gain the funds to rebuild and modernise her kitchens, and expand and renovate the apartments, but for much of Victoria’s childhood her mother’s French chef and his assistants worked in decidedly sub-standard conditions.

The Duchess was well aware that Victoria would probably become queen, and set out to forge her public image from her early years. Biographies written during Victoria’s reign dwell on a standard series of carefully-managed scenes starring the young princess: Victoria taking breakfast with her mother on the lawn; Victoria as a toddler, watering her feet while gardening; Victoria waving to the public who clustered around the palace, desperate to catch a glimpse of the isolated princess. In private, she was groomed for queenship, her lessons carefully monitored, and her friends kept to a minimum. Most aristocratic girls suffered similar watchfulness, and Victoria was not very different to many of her peers.

As with most aristocratic girls, Victoria was educated at home, and learnt to enjoy sketching, singing and riding as her main extra-curricular activities. However, as her mother fell under the influence of her advisor John Conroy, the pair slowly implemented a set of rules and procedures which later became known as the ‘Kensington System’. The ‘System’ aimed to break Victoria’s spirit as she entered adolescence, ensuring she was totally reliant on her mother (and, by default, Conroy), through complete isolation and control. She slept in her mother’s room, and had to hold her hand on the way downstairs until the day she became queen. All decisions were made for her (often against her wishes) and, much to King William IV’s annoyance, she was kept away from court, where she might have been exposed to other influences. Even her food was limited to plain ‘nursery’ food, including just bread and milk for breakfast.

Her only support during these years was her governess, Louisa Lehzen, who was utterly devoted to the Princess and became her ally against her mother and Conroy. You will meet Nanny Lehzen, later in the course.

From 1830 onwards, and with Victoria now first in line to succeed the King, she visited houses and towns across the country on a sort of ‘royal progress’. Victoria was exposed to all kinds of culinary experiences, from sandwiches in the coach, to cold collations with mayors, to full aristocratic dinners. She was incredibly popular, seen as an antidote to Georgian excess. She was universally described as youthful and feminine, and praised especially for her complexion, though she was also criticised for her tiny height and figure. She became very tired, suffering from digestive issues and period-related illness. Despite this, she kept a daily journal, read, of course, by her mother, singling out foods such as mutton, fruit and sailor’s stew for praise. In 1835, the Princess became seriously ill, and was bedridden for several weeks. Conroy and her mother tried their best to get her to sign documents promoting him to her personal secretary, a position from which he would be able to control her even more fully, but, although extremely physically weak, Victoria resisted, showing an iron will which was to characterise many of her dealings in later life. She demonstrated a new determination to educate herself for her eventual accession, when she was resolved to stand alone and throw off the shackles of her childhood.

King William IV became seriously ill in May 1837, hanging on just long enough for Victoria to turn 18 and reach her legal majority. When he died in the early hours of June 20, Victoria was finally queen, and able to declare her independence from her mother. She threw herself into her new role with enthusiasm, and the British public—initially—adored her.

Throughout this week we will make references to Queen Victoria’s Journals. Queen Victoria maintained personal diaries throughout her life, filling 122 volumes. If you would like to explore them, you can find them on Queen Victoria Journals website. In response to previous Learners requests in the comments area, learners outside the UK can find the journals here.