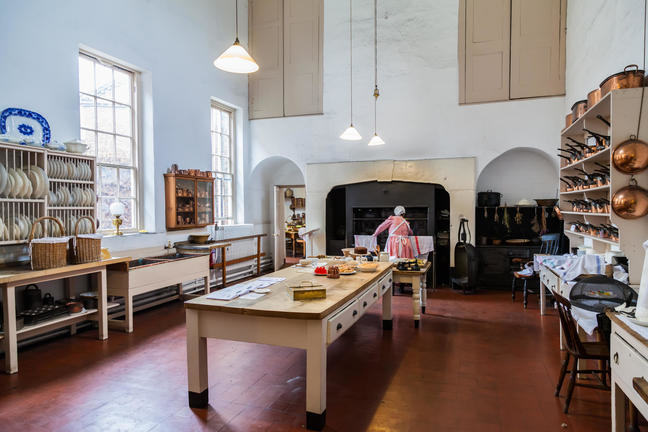 The Victorian period was one of immense technological change, as Britain underwent a second Industrial Revolution.

The stage was set for the rise of the middle class, who could for the first time aspire to emulate royalty, and in particular Victoria. Innovations in ovens, new ingredients and the growing mass-production of equipment meant that a wider proportion of the population could experiment with food in a way that had never been seen before. At the start of Victoria’s reign, most kitchens were lit by oil and fuelled by wood or coal, but by the end many people cooked on gas. Dishes which had once been for the aristocracy and royals alone, now became accessible to all.

When Victoria came to the throne in 1837, even aristocratic kitchens were fairly basic by modern standards. At Kensington Palace, the Duchess’s ‘new’ kitchen in 1835 resembled a Georgian kitchen far more than one of today: it had a wood or coal-fired brick beehive baking oven (in the scullery, where it would not make the kitchen too hot), along with a small coal-fired oven, steam-heated hot closets, charcoal chafing stoves, a large coal-fired roasting range, and a hot plate for keeping dishes warm. The roasting range had a smoke-jack to turn the spit, similar to that found in the Royal Kitchens at Kew.

Aristocratic kitchens were generally all of this type, with lots of separate fireplaces containing all of the elements needed to cook a large selection of extravagant, often complicated food intended to be served all at once. If you were middle class, you usually had fewer hearths, and you would probably just have ovens, a roasting range and a chafing stove or two. A lot of kitchens were essentially Georgian – but if it worked, and if your cooks knew how to use the equipment, there was no need to change it. Upper class kitchens in particular didn’t really change, because there was enough space to add more things, or replace out-dated elements with more modern ones, without really changing the kitchen very much.

By the 1850s, in new middle class kitchens, you might have all of your cooking technology grouped together in one large cast iron range, which would contain two or three ovens, with hobs above them on an iron surface which would have hot, cool and really hot spots, and on which you would place you pans according to what temperature you were after. These ranges were often known as ‘Kitcheners’, and were very popular, continuing to be installed well into the Edwardian period, and used for even longer. Suddenly the middle classes could aspire to replicate what was being produced in the royal kitchens. As service à la Russe came in, and the roast gradually stopped being displayed on the side-table at dinner, some people started roasting in ovens, instead of in front of the fire, and ranges started to incorporate a roasting oven as well as a baking oven. 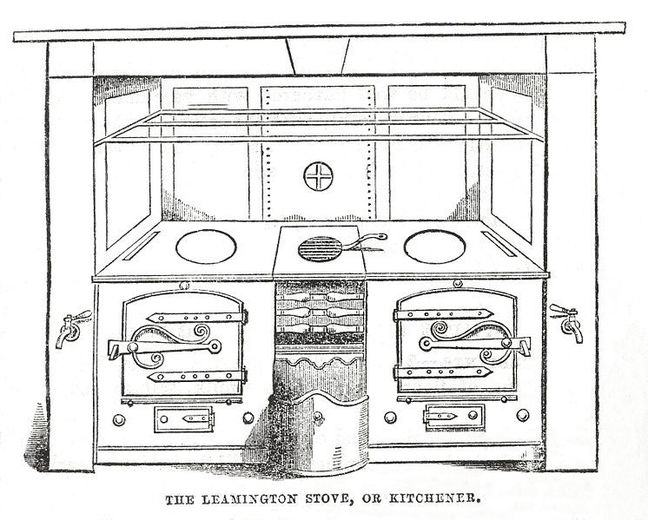 Gas cooking technology started to come in during the late 1820s, but it was not until the 1840s that it became at all popular. Many people distrusted it, fearing it would taint their food and burn their houses down or kill them through carbon monoxide poisoning (early ovens had no automatic shut-off valve, and the gas was odourless, so these fears were not without foundation). However, by the 1870s, gas ovens and hobs were being installed in many newly-built houses, and in some places electricity was also in use. The majority of kitchens were still coal-fuelled however, and remained so until after the First World War. In working class homes the main cooking fire was often also the main heating fire, whether it was a simple fire, boiler and hot-plate which could be swivelled onto the fire, or a small solid-fuel range. In the winter it was lit all of the time, and a gas range would not have been as useful as a coal one.

While new equipment was slow to be adopted, new ingredients were not. The Victorian era saw the rise of the canning industry, from its beginnings in early Georgian France, to the end of the 19th century when tinned foods were a staple. Now when Queen Victoria enjoyed her fresh ‘perfect’ peaches, her subjects could have access to the same fruits at any time of year imported in tins from California. Baking powder was invented in the 1850s, although upper class cooks, including those at the royal kitchens, preferred not to use it as it was seen as ‘cheating’, and they had the time and money needed to create cakes using more laborious, traditional methods. However, it was enthusiastically embraced by others, especially the time-poor middle classes.

Packet gelatine and mass-produced tin moulds meant that jelly and blancmange became feasible dishes to serve on the middle class table as well: previously the aspiring jelly-maker had to boil calves’ feet down to extract the gelatine and then clarify, flavour, and colour the resulting liquid. Now these foods were quick and easy. Chemical food dyes and flavourings were on sale by the last decades of the 19th century as well, leading to a vogue for brightly coloured foods, now illustrated in full colour in the many books of the time. However, these colourful dishes did not grace the royal table. 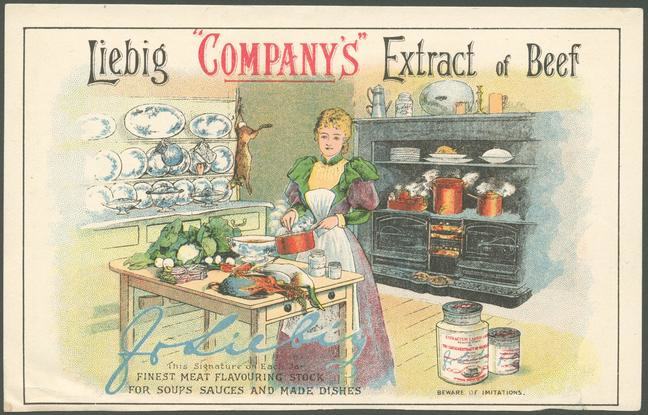 During Victoria’s 63 year reign, these changes revolutionised the way that food could be prepared, and set a standard for today’s food and cookery. In the next Step we’ll explore how the growth of the cookery book went hand-in-hand with these changes in food technology, and opened up gastronomy for the masses.