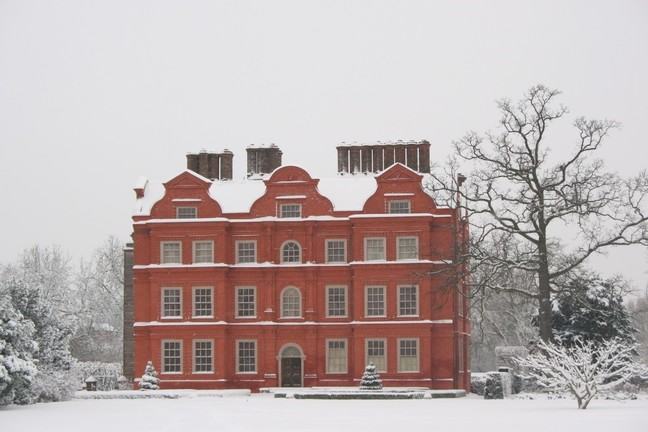 Christmas in the late Georgian period

Christmas for the late Georgians was a muted festival. The old Twelve Days were now long gone, and the celebration was increasingly seen as a rather lower class affair, observed predominantly in the country by somewhat unfashionable landowners.

As Britain grew into an industrialised nation, more people were employed on a daily wage, to keep up with the economic growth. When the Factory Act was passed in 1833, Parliament recognised only two legal holidays: Good Friday and Christmas Day, putting an end to the tradition of 12 days off work.

The idea of Christmas, as a season for hospitality, gift-giving, feasting with friends and pausing for a while in mid-winter was rapidly losing both its spiritual and emotional appeal. The upper classes regarded it as rather tiresome, especially the idea that one should retire to one’s estates and hold feasts for all and sundry. Some families did still do this, predominantly older and more established landowners, but most preferred to spend Christmas with people they knew well! The wealthy headed for pleasure resorts or country properties, to hold tasteful dinners and socialise with members of their own class. The emphasis now was on three days: Christmas Day for a large meal, New Year’s Day for present-giving, and Twelfth Night for the one remaining party.

‘I hope your troublesome time is over, but now myne is aproachin, for Crismas brings aboundenc of troublesom gess [guests]. I designe to be as sneeking as I can, and doe noe works of suparflewety, only what just nessessety foarsis [forces]’.

Church-going was a significant part of Christmas Day, usually in the morning, followed by dinner and entertainment. Although the very wealthy were eating at around 7 or 8pm by the 1800s, those somewhat below them on the social scale, and more likely to throw themselves whole-heartedly into Christmas, were still eating in the middle of the afternoon, giving them hours in which to play games. One popular game was snap-dragon, in which a bowl or platter of currants was liberally doused in brandy before being set on fire. Participants had to snatch currants from the flames before they went out. Other games such as charades, blind man’s buff and squeak piggy squeak were also popular, and for those who preferred to go out, the pantomime was just beginning to gain in popularity by the very end of the Georgian period.

Presents were still normally exchanged on New Year’s Day, although Christmas Day gifts were starting to be advertised as well. Servants, apprentices and tradespeople received a sealed box, generally containing money (or useful items such as tools of the trade or dress fabric for servants). The boxes were given on the 26 December, hence its English name of ‘Boxing Day’.

Houses were still decorated with evergreens, although for those lucky enough to live near Windsor, the German tradition of decorating trees could be witnessed in all its glory. This custom was unheard of in Britain until 1800, when the royal family introduced it from Hanover. George III’s queen, Charlotte, introduced a Christmas tree at a party she gave for small selected local families, and there were also acrobats, jugglers and various stalls. One commentator described the scene:

‘Sixty poor families had a substantial dinner given them, and in the evening the children of the principal families in the neighbourhood were invited to an entertainment at the Lodge. Here, among other amusing objects for the gratification of the juvenile visitors, in the middle of the room stood an immense tub with a yew-tree placed in it, from the branches of which hung bunches of sweetmeats, almonds, and raisins, in papers, fruits, and toys, most tastefully arranged, and the whole illuminated by small wax candles. After the company had walked round and admired the tree, each child obtained a portion of the sweets which it bore, together with a toy, and then all returned home quite delighted’ (From Edward Holt’s work on George III).

Christmas feasting was, by the late 18th century, almost entirely focussed on Christmas Day dinner and there were certain dishes that were essential to complete the festive table. Seasonal farmed bird meat was one – turkey for the rich, goose or chicken for the middle and lower classes. East Anglia was at the heart of turkey-rearing country, and flocks of birds would be ‘driven’ (walked) down to London to be fattened and slaughtered, their feet dipped in tar to help keep them intact on the journey. Pork products including brawn, were still popular, and game, especially roast, was obligatory. Mince pies were now losing some of their meatiness, as the division between savoury and sweet became more rigid, and sugar, becoming ever cheaper, started to be used as a more general ingredient rather than a luxury. Plum pudding was an enduring favourite, still served alongside the roast beef.

‘This English custom of having a particular fare for this particular day is perhaps without exception the most universal of any that prevails in the country. Probably there is not a single table spread on Christmas day…that is not furnished with roast beef and plum-pudding’. 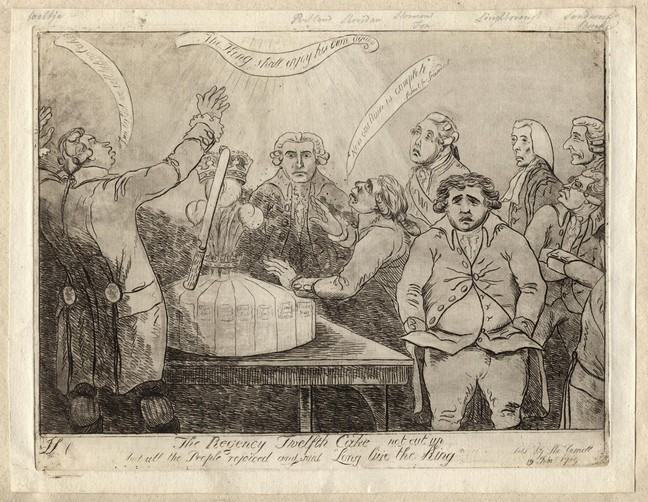 One of the most popular foods of the Georgian Christmas was the traditional Twelfth Cake. It was still often made using yeast as a raising agent, and was deliberately old-fashioned, and one of the few real continuities with the medieval Christmas. By the late Georgian era, the ritual had been elaborated, with the pea/bean inside the cake replaced by a set of paper characters which were drawn from a hat. The characters were printed especially for Christmas, and along with the king and queen there were a whole host of other characters, often drawn from topical events, and sometimes accompanied with jokes, rhymes or rude verses. Diners would cut the cake, pick out a character and enact the role, or play out the scenes on the cards. The cake was usually decorated, simply as a white sugar crown – but as bakers started to cash in on the possibilities offered by the Twelfth Cake (Twelfth Night was sometimes known as ‘all cakes day’) – the variety of decoration expanded until you could choose from a huge range. People flocked, not just to buy, but to look at the cakes, and in 1827 William Hone described the scene in glowing terms:

Gingerbread was another staple of the Georgian Christmas table, and remains so in many cultures today. Early versions often just involved breadcrumbs, honey and spice, but by the Georgian period it was darker and thick with treacle. It was originally associated with feasting because the spices were expensive, although the ginger itself was not nearly as pricey as many of the other spices which could be included. Why not try and make your own Georgian gingerbread at home? You can share your creation on the Padlet Wall.

Discover the incredible world of 'the Hobbit' as modern archaeological science uncovers secrets hidden in time.