The analytical approach in forensic chemical analysis of an unknown substance is to narrow down the possibilities until a drug is identified. After visual examination, presumptive or screening tests are conducted. These tests are usually fast, cheap and simple to conduct. In forensic chemistry colour-based presumptive tests, reliant on the visible reaction of drug and diluent specific chemical functional groups with reagents, are often used. Positive or negative results from these tests indicate the likelihood of a sample containing a specified substance or functional group based on comparison with controls. Categorised as a Category C technique, positive results from chemical spot tests require confirmation according to the SWGDRUG guidelines.

Drugs of interest in forensic chemistry are characterised by a small number of functional groups (ie phenols, aromatic rings and nitrogen (eg 1°, 2°, 3° amines)). Some drugs contain more than one of these groups that in combination react with the testing reagent to give complex results. This is even more complicated in a sample mixture containing several drugs. One must also be wary of the fact that some samples (eg those containing strong acids), if left in contact with reagents for long periods, can trigger unrelated colour reactions.

Some of the commonly used colour tests include cobalt thiocyanate (Scott Test for cocaine and related drugs), Marquis (for alkaloids, amphetamines, and opium-related derivatives eg morphine and heroin), Mecke (for alkaloids) and Duquenois-Levine (for marijuana).

When an unknown substance (such as a tablet, powder or plant) is admitted into evidence, a series of colour tests are done on a small quantity of the sample (sufficient sample needs to be preserved for confirmatory tests and other analyses). Test results are reliant on the concentration of drug, hence for a dilute sample a larger amount of material may be required. Based on the physical appearance of the sample, the analyst should judge the applicability of each colour test to that sample, eg if the sample is a green plant-like material it would make sense to prioritise the Duquenois-Levine Test over the Scott Test.

Spot tests are usually performed on a clean glass/ceramic plate or in a disposable test tube. To perform the test a small amount of sample is placed in the plate (or test tube) to which the reagent is added. It is important to analyse positive and negative controls in parallel with the sample for comparison. Pictures of results and contemporaneous notes should be recorded.

Scott Test for cocaine displays blue in a pink background to indicate a positive result.

Duquenois-Levine test for marijuana, showing a purple colour in the organic phase (bottom layer) of the solution to indicate a positive result. 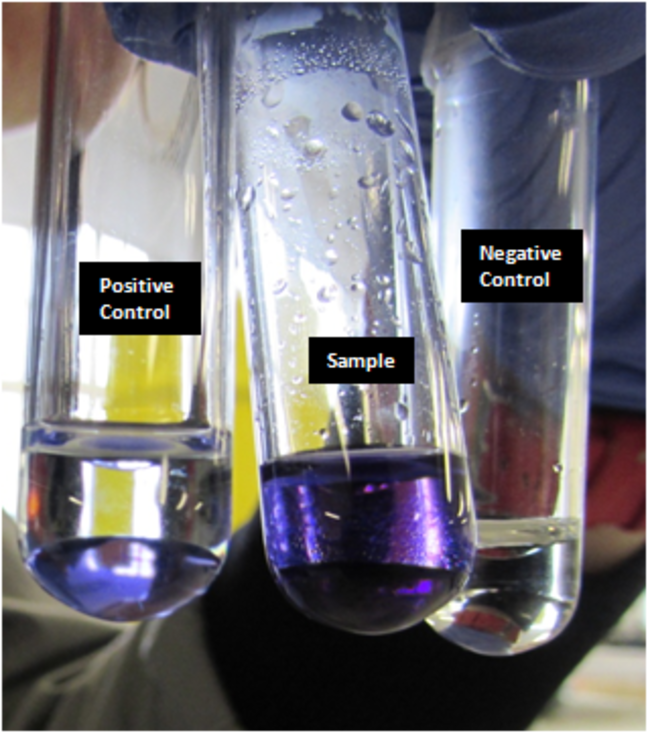 Why is it important to run positive and negative controls?

Get an introduction to issues, agendas and contexts relating to fashion and sustainability in a changing world.