The first thing that might come to the mind of researchers probably is scientific papers, abstracts, posters and other kinds of technical writing. However, writing for the general audience is quite different - it has different rules, a different style, and different structures.

Different structures, and not a different structure, because science writing actually encompasses more than one thing - from science news and press reports to books and science features.
But do different forms of writing for the public share something?

In fact, yes. They are simpler and more readable than scientific articles.
This often starts with the choice of verbs. In science it is common to use the passive voice: it was demonstrated, nervous signals are transmitted by, the cosmic background radiation was detected, and so on.
It is believed that the passive voice is more formal and detached, and therefore transmits a sense of objectivity, but the active voice has distinct advantages over it:

The last concept refers to the transformation of an action verb (e.g.: we analyzed, we synthesized) into a verb which does not carry the action, paired with a noun (e.g.: we performed the analysis, we carried out a synthesis). Nominalization makes the sentence harder to read, as it takes away the meaning from the main verb of the phrase, where it is usually found.

Another the basic concept of effective writing is to remove unnecessary words.
Think about a sentence such as It is known that higher levels of LDL cholesterol are linked to an increase in the occurrence of cardiovascular disease. How can we make it shorter and more readable? Some parts of the sentence do not carry additional content: “it is known”, “levels” and “occurrence”.
Writing just High LDL cholesterol is linked to an increase in cardiovascular disease is shorter and more to the point. But why is this important?

Simplifying the text structure and removing unnecessary words increases the readability of the text.
The readability is not something purely subjective, and aspects of it can be estimated using different algorithms. They consider different factors, such as the average number of words in a sentence and the proportion of long words in it.

The most commonly used are the Flesch reading ease test, the Gunning Fog test, the Flesch-Kincaid Grade Level and the SMOG grade.

Even if they use different parameters, all of them lead to an estimation of the education level needed to understand a text.
Plain English has a Flesch reading ease value of 60-70 (higher is more readable), but this does not necessarily mean that you should aim for that goal.

You should instead sample some texts that talk of a subject similar to yours, targeting a similar audience, and run readability tests on them.
The scores can be easily calculated using your word editor, or a website such as Readable or Readability Formulas.

Long words and sentences are not the only factors that make a text harder to understand. Technical jargon is abundant in scientific papers, but is usually not understood by wider audiences.
These terms should be explained (if there is enough time or space on the page to do so), or avoided altogether. Some care should be taken also for words such as nucleus, which do not sound like jargon, but actually have different meanings in different scientific fields, and could confuse the audience.

A tool that can help avoid this risk is the de-jargonizer.
It compares your text with a reference base, and identifies high-frequency words (the ones that are most commonly used), mid-frequency words and rare words, which are likely to be jargon.

All the previous considerations become especially relevant when you think about one of the main ways of communicating science to the public: science news published in newspapers and magazines. They are much shorter than a scientific paper - about 500 to 1000 words, and they follow a different logical structure.

Scientific articles, especially in experimental disciplines, often follow a scheme that is known as IMRaD: Introduction, Methods, Results, and Discussion. In news reporting the structure is different, and it follows what is known as the ‘inverted pyramid’: 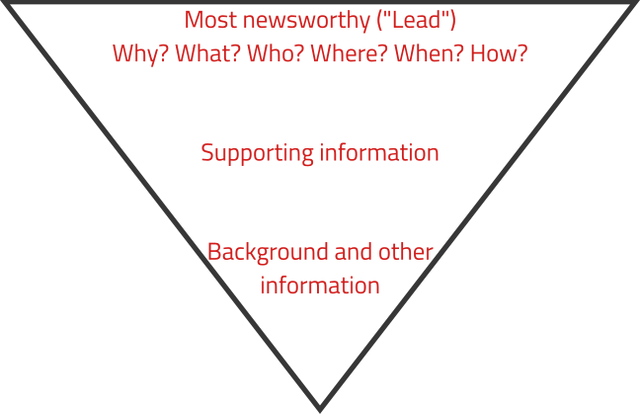 The bottom line is moved at the beginning. The initial paragraph, called the lead, grabs the attention of the public, it conveys the most important information and it sets the tone.
This means finding an answer to the five W: “What happened?” is the most important question; “Who?”, “When?” and “Where?” give information about the scientist and the university that carried out the research. “Why?” explains to the audience the relevance of the news. Answering the question “How?” is not always part of science news, even if it gives information about the way the research was carried. After this, the science news usually continues with a quote from the authors of the study, or another expert, and then will continue adding supporting information, quotes and scientific background, arranged in descending order of importance.

This means that in printed media the editors can the story to save page space without losing information concealed in the ending paragraphs and that if a reader loses interest after a couple of paragraphs, it will still have read the core message.

In the end, what started as a long scientific article can end up condensed in less than 400 words.

Reading back to back a scientific article from your field and its transposition into a news story is a good exercise to help you understand the process of writing for the public, and not for scientists.
Sources of science news include the properly named ScienceNews, the news section of Science and the science news section of most large newspapers.