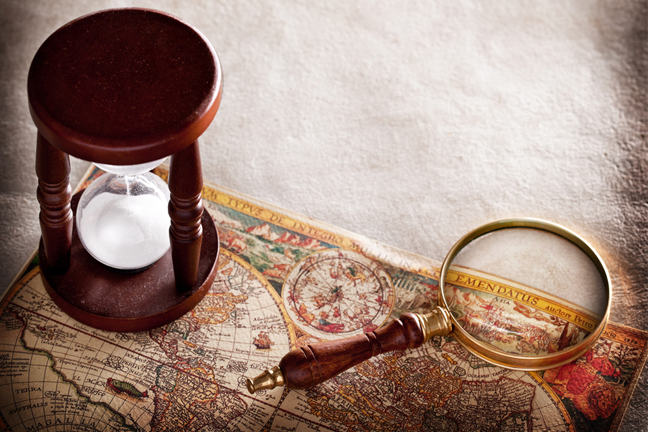 The problem with time

Time is of critical importance to archaeology; knowing when and where something happened is crucial in constructing the story of our human past. However, telling that story in a clear and easily understandable manner is not always straightforward. The principal reason for this is that the names we give to different periods are not the same the world over, and, where they are the same, do not always occur over the same stretch of time – see, it’s confusing already!

To begin, we need to decide when the archaeological record can be seen to start. In this course we have opted for a date of roughly 2.5 million years ago. This is when our family line (Homo) first emerges in Africa and we see the emergence of stone tool making traditions. Even this starting point is a little blurred, in that some researchers would see archaeology as encompassing the entire human evolutionary record (stretching back over 6 million years) and with new finds challenging the time depth of tool making on a periodic basis. However, 2.5 million years gives plenty of scope to this course and, as you’ll see next week and in Week 3, our earliest evidence for seafaring occurs much later than this. If you’d like to know more about the time depth of human evolution and the archaeological record for it, the Smithsonian has created an excellent timeline*.

To complicate matters archaeologists have a habit of switching between two ways of referring to periods in the past, and use two different terms to relate to dates in the past. When we discuss ‘deep time’ (such as 2.5 million years ago) we will often adopt Geological periods. The entirety of the last 2.5 million years is called the ‘Quaternary Period’. In turn this is broken down into two ‘epochs’, the Pleistocene (2.59 million to 11,700 years ago) and the Holocene (11,700 year ago to present).

When working with deeper time you will often see reference to mya (million years ago) or kya (thousand years ago) in articles and on websites. You may also come across the term BP (before present). ‘Present’ in BP actually relates to the 1st of January 1950. This is because radiocarbon dating was developed in the late 1940s and a decision was made to set a standardised temporal reference point.

The other terms you will see are the more familiar BC (before Christ), BCE (before Common era) and AD (anno Domini), CE (common era) terms, all of which refer to the Gregorian calendar widely used across the world today.

The other form of chronological terminology we use relates to archaeological periods. These broadly reflect changes in the technologies we have developed through time, and have their origin in the Danish archaeologist Christian Thomsen’s 3 Age System, developed during the 1820s. This scheme organised the archaeological record into Stone, Bronze and Iron Ages. As people looked more closely at the archaeological record they realised that even within these three categories you could see considerable differences. As such, sub-divisions began to be created. The Stone Age became split into three different periods (Palaeolithic (Old Stone Age), Mesolithic (middle Stone Age) and Neolithic (New Stone Age). Similarly, in some parts of the world it became clear that copper had a significant influence on social development in the period between the Neolithic and Bronze Age, and so a Copper (Chalcolithic) period was inserted.

However, Thomsen’s terms and their later developments frequently pose a challenge to those new to studying archaeology. To help clarify why I’ll use a case study of the Neolithic in Europe to try and explain. The term Neolithic relates to the period in time when people began to adopt agricultural practices, created a new form of polished stone technology and in some areas changed ritual practices and settlement behaviour. This change leaves a relatively clear signal in the archaeological record (changes in stone tools, pollen from what people were growing and changes in what their settlements and ritual sites looked like). The difficulty comes with the fact that the story of the Neolithic in Europe begins roughly 10,000 years ago in the fertile crescent of the Levant. Then, by movement of people or ideas (or indeed both) this change in lifestyle makes its way across Europe, reaching the region where Paris is today roughly 7,000 year ago. There is then a 1,000 year wait until we see Neolithic activity in regions like the British Isles. Thus 7,000 years ago we can talk of a Mesolithic in Britain and a Neolithic in France. Thus the term ‘Neolithic’ relates more to a set of practices in the past rather than a definitive moment in time. If we want to know ‘when’ it happened we also need to know ‘where’ we are talking about. It is for this reason that we have created the timelines that accompany this course, but, if you ever have any questions, please just post them in the comments and our facilitators will respond.

*Unfortunately, the Smithsonian interactive timeline is not accessible on iPads - apologies.