0:41Skip to 0 minutes and 41 secondsBut when we're looking at indirect evidence, we're really looking at the remains that we can see that people moved from a to b travelling across a body of water. So this might be, for example, artefacts found on islands, or on landmasses which we know were separated by channels of water. So when we're looking at these really early instances of seafaring this is what we're looking at. Now most early archaeology can be contested. And this is absolutely true for the case of the earliest seafaring as well. Perhaps you'll be surprised to hear that the really, really earliest predates even anatomically modern humans. And this is the find of artefacts, stone tools, on the island of Flores in Southeast Asia.

1:26Skip to 1 minute and 26 secondsNow interestingly this island was separated, and has always been separated, by a deep water channel, which would have meant that Homo Erectus crossed this deep water channel at some point around 800,000 years ago. Now this is really interesting because it ties to the question as to what is seafaring. Because it's been suggested, for example, by our colleague Cyprian Broodbank that this is culturally enhanced floating. And that there's a difference between seafaring itself and seagoing.

1:54Skip to 1 minute and 54 secondsBut if we take this one off early date out of the picture, we don't really see anything else in terms of seafaring, or seagoing, until 750,000 years later when in the same region of the world, interestingly, we see that humans, this time anatomically modern humans, cross from this basin here, known as the Sunda Shelf, onto this continental landmass, now Australasia, but also known geologically as Sahul. So we get this crossing of early humans from Sunda to Sahul, possibly 200 to 250 kilometres, by around 60,000 to 50,000 years ago. And this is the earliest evidence we have of seafaring which is uncontested.

2:36Skip to 2 minutes and 36 secondsThe reason that this evidence for early seafaring is important is that when we look at the archaeological record for these time periods, often what we're seeing are just collections of stone tools. There are perhaps a few bones. But when we actually understand that people were building boats or using rafts, even quite simple technology, we suddenly understand that there was a lot more complexity that we just don't see in the archaeological record. When we're looking at seafaring, we learn not only about the technology of the boats themselves, how they were produced, but also about cognition, about skill, and how people were working together.

3:12Skip to 3 minutes and 12 secondsFor example, think about navigation and how people dealt with the changing environmental conditions of that body of water. So this is really critical to understanding our human ancestors. So we also need to think about the boat technology itself. At this level, this early, prehistoric seafaring, we're not thinking about complicated boats. We're thinking about simple rafts, or simple log boats. And these might be made of bamboo rafts, or other materials, for example, leathers and skins. But in this area particularly, people have suggested that bamboo rafts might have been used. And we need to think about how many people were crossing. So a genetically viable population crossed this body of water between 60,000 to 50,000 years ago.

3:56Skip to 3 minutes and 56 secondsAnd when I say genetically viable, what we see is quickly we see various sites springing up all across Australasia, all across the Sahul land mass. And this means that at least 30 adult, healthy individuals crossed this stretch of water. So I don't think we're just looking at people floating across sporadically. This is actually, technically, seafaring.

In this video Helen discusses the evidence for the earliest seafaring in world history, before getting you to consider the who, when and why of early seafaring.

Evidence for seafaring stretches much further back than we may have imagined and was associated with Anatomically Modern Human (known as AMH or Homo sapiens sapiens) migration out of Africa. It has been argued that the migration of humans Out of Africa was expedited though their use of a ‘Coastal Express’. Coastal environments would have provided a familiar economic niche for our early ancestors to travel through, providing access to coastal marine resources. Shellfish, would have been a dependable resource even at times when hunted food was scarce. The timeframe in which AMH left Africa is hotly debated; some evidence would seem to suggest Late Pleistocene humans were on the move well before the Toba eruption c. 74,000 years ago, and perhaps as early as 125,000 years ago, whilst others argue for a rapid post Toba dispersal. If the latter argument is followed it would appear that AMH colonized the globe at a rapid rate, covering 12,000 km to reach Sahul by c.50,000 years ago.

However, even with evidence that our ancestors were living on the coast and utilising marine resources, we cannot assume seafaring technology. The earliest evidence for AMH seafaring comes from the indirect evidence of archaeological finds in northern Australia (Nauwalabila I & Malakunanja II) because we know that at the land mass of Sahul was separated from South East Asia by sea. The exact distance of this channel depends on the route that was travelled and the sea-level at the time, but may have been up to 200km.

In addition to dated archaeological material, we can use human genetic evidence to map and date colonization. Current Mitochondrial DNA (mtDNA) research maps the distribution of haplotypes (mtDNA variants) in different human populations then correlates these to estimates of mutation rates. Researchers are also working at tracking the male Y chromosome, but high-resolution analysis is only just beginning and results are very tentative at present. In essence, this research enables us to create a temporally structured genealogy or ‘family tree’. Current findings support a colonization of Sahul from c. 55,000- 50,000 years ago.

So, we know when and we know who, but why did our ancestors first step off the land and voyage across the sea? Again many theories abound. These can be divided into Push factors and Pull factors. Push factors may include competing social groups, the lack of food, or a change in environmental conditions. To consider that all major choices were made due to environmental changes would be too simplistic (and you would be classed an environmental determinist!). Pull factors could include, the search for raw materials i.e. flint or obsidian; following migratory animals, fish or birds; the quest for more land or the lure of the unknown.

We may never know exactly what crossed the mind of the first group of humans to build a simple boat or raft and push off for the distant horizon; however I imagine that it may have been a combination of all these factors. It is quite possible that watercraft were regularly used for local fishing or island hopping. Evidence for fishing was found in East Timor dating to 42,000 years ago. It has also been argued that the first founding ‘colonies’ may have been swept off course, although it takes around 30 adults to establish a healthy breeding population, so this would seem unlikely.

Evidence for seafaring in the Late Pleistocene tends to emanate from colonisation events. In the Mediterranean there are a few assertions of early seafaring based on human presence on islands indicated by stone tool assemblages but in my opinion more evidence is needed to attest to these. Three questions are always key: 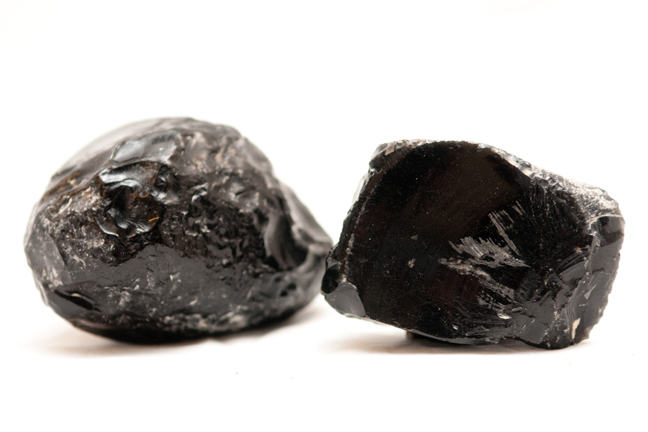 Obsidian from island sources found on the mainland in Greece represents the earliest evidence for seafaring in the Mediterranean ©farbled/Shutterstock, 2015

The first secure evidence of seafaring in the Mediterranean comes from the 11th- 10th millennium BC in the form of obsidian from the island of Melos found in Franchthi cave in Greece. At a similar time people also began to seasonally visit the island of Cyprus. The earliest island occupation site is that of Akrotiri Aetokremnos dating to the 10th Millennium BC. This appears to be a seasonal hunter-gatherer site in which the association of anthropogenic material and pygmy hippopotami remains suggests that humans may have been responsible for the extinction of that endemic late Pleistocene fauna. The sea-level at this point in time may have been up to c. 55 metres lower than the present day but was rising rapidly. Even with these lowered sea-levels the presence of these hunter-gatherers on the island of Cyprus indicates that people had the maritime technology and social organisation to undertake a considerable journey (64.82 km if they came from Anatolia to the north or a voyage of 144.5 km if they came from the East).

By the onset of the Neolithic (c. 6500BP in the central Mediterranean), people were regularly using boats. The islands of the Mediterranean have been described as a nursery for the development of seafaring skills and technology. Islands were exploited for raw materials, and used as stepping stones for the transportation of various raw materials and items for trade and exchange: technology, plants and animals as well as people - and with them their ideas, ideology, beliefs, culture skills and knowledge. The spread of the Neolithic through the Mediterranean has recently been traced through genetic markers to show a maritime dispersal of people across the central Mediterranean.

The Neolithic saw an intensification of seafaring activity and maritime technology, not just in the Mediterranean, but around the globe.

Obsidian is an interesting material. Has it got a particular make up that allows it to be identified from area to area?

Good question. In brief - in certain contexts volcanoes produce an acidic/rhyolitic lava that cools very quickly to form a volcanic glass known as obsidian. (Incidentally, it generally has a frothy, bubbly layer on the top - which is pumice - a pint of Guinness is a good analogy). When the magma rises through the volcano during an explosion, it melts and incorporates some of the rock- as such trace elements from the local geology end up within the volcanic glass. Each geological setting will be specific to each volcano, and at a very precise level, each eruption will also vary. If we study the trace elements and know the specific local geology we can match the obsidian to a particular volcano - and even a specific eruption!

A lot of work on this has been carried out on the island of Lipari in the central Mediterranean. Here, both a prehistoric and a classical period eruption can be identified. When we find obsidian in the archaeological record around the Med. we can say which volcano it came from and which eruption, this also helps with dating material and means we can trace its source and movement.

You can read more about obsidian here: Obsidian: Volcanic glass prized for tool-making