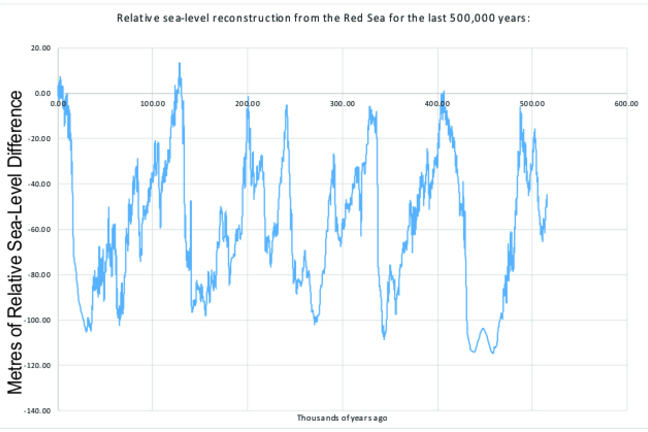 Relative sea-level reconstruction from the Red Sea for the last 500,000 years

Understanding the changing geography of our planet is fundamental for maritime archaeological research. Over the 2.5 million years we are considering in this course, sea-level has fluctuated by as much as 120m on multiple occasions over thousands of years. This not only shaped the geography of our planet in terms of landmasses, but also changed the behavioural characteristics of the sea and nature of coastlines (e.g. shifts from cliffs to shallowly shelving beaches and vice versa).

The figure at the top of this page shows a graph of changing sea-levels over the last 500,000 years, created from data from the Red Sea. Cores in this area allow researchers to calculate fluctuations in the amount of water in the world’s oceans and seas and correspondingly estimate changing relative sea-levels.

The driving force behind these large-scale changes is ‘orbital forcing’. The sun is the major source of energy that reaches the Earth and largely dictates the temperature of the planet. However, the Earth does not orbit the sun on a vertical axis or follow a uniform path. Instead the earth is tilted away from the sun, and the angle of the tilt changes through time (what we call obliquity). In addition, the orbit of the Earth oscillates around the sun, sometimes passing closer to it, and at other points further away, in a process referred to as ‘eccentricity’. Finally there is a ‘wobble’ in the Earth’s rotation, known as ‘precession’. These three factors operate at different time scales, with eccentricity changing over a c.100,000 – 400,000 year period, obliquity over 41,000 years and precession c.26,000 years. Together they affect how much energy reaches the earth and how it is distributed over the surface of the planet. You can watch a short video about this on the National Geographic website*. (*N.B. This video will not play on iOS and Android mobile devices - apologies).

The significance of changes in orbital pattern on the earth’s climate was first noted by Adhemar and Croll in 1842, but it was the Serbian scientist Milutin Milanković working in the 1920s who recognised the three separate elements and considered their periodicity, giving his name to this phenomenon. These apparently subtle shifts in distance and angle to the sun can lead to the melting of polar ice caps and increases in sea-level, or, reduction of heat at the poles, an increasing ice volume and a corresponding fall in sea-level.

Thus the changes we are discussing can occur over very long periods of time, or in a matter of seconds. However the impact that changes in relative sea-level have had on the world people have lived in has been profound. In the last step of this section you will engage with a basic model of palaeogeographic change at a global level over the last 23,000 years to identify how this story played out in your part of the world.