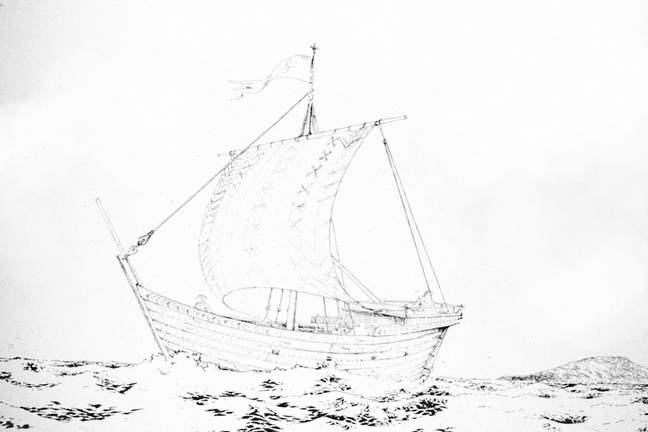 Reconstruction of the Bossholmen cog. Drawing by Jon Adams.

Shipbuilding and life on board

During the majority of the period under discussion, from c. 1200 to 1585, lapstrake construction was the dominant shipbuilding technology in northwest Europe. Boats and ships that were lapstrake-built have a hull made from planks with overlapping edges connected with rivet nails or wooden pegs. Lapstrake-built vessels could be found from Scandinavia all the way down to western France.

There is an enormous diversity of names referring to boats and ships in historical records. By far the most common names used to describe large cargo vessels were keel, cog and hulc. There are some problems with consistency however, a ship that was described as a hulc in one harbour could be written down as a cog in the next. Therefore, archaeologists are cautious when relating shipwrecks to these entries in the historical record. From an archaeological perspective, only two major types can be distinguished: the entirely lapstrake-built ships, found in all sizes all over northwest Europe, and the cog, with its strong ties to the Hanseatic League.

Lapstrake-built ships and cogs sailed the North- and Baltic seas side by side during the twelfth to fourteenth centuries and although remaining technologically distinct, they exchanged many construction features. Over time, the cargo capacity of the largest ships increased from around 60 t in the eleventh century to 200 t during the thirteenth century. From the fifteenth century onwards, much larger vessels of 450 t and more were plying the waters, although the smaller vessels of up to 200 t were still making out the vast majority of the workforce. One of the main driving factors behind this process was the emergence of towns in the beginning of the period, necessitating the transport of bulk cargoes. While fluctuations in the economy due to political events or the Black Death might explain why the majority of the commercial fleet remained relatively stagnant in size until the sixteenth century.

Increasing the size of vessels also had certain drawbacks. In times of a declining economy, there was the risk that they would have to sail half-empty and more importantly, not that many harbours had the depth or adequate facilities to efficiently dock large ships and unload their goods. Therefore, increasing the number of ‘smaller’ ships was a more competitive way to reduce transport costs. They could maintain the connections between smaller centres which only traded a limited flow of goods and they were able to navigate waterways and enter shallower harbours that were inaccessible for larger ships, but along which important trading-ports were situated.

The construction process of ships remained largely the same as it had been during the Viking Age. Vessels were still built without the aid of plans or drawings. Shipwrights relied on inherited rules of thumb, geometry and the shipwright’s ‘eye’ for lines and distances, although it is hard to imagine how certain very large ships could have been built without the use of moulds. It is important to stress that the medieval shipwright was not an architect that ‘designed’ a vessel who then had a skilled labour force that would construct his design. The shipwright was an integral part of the workforce. The separation between theory, design and practice is a modern notion which developed from the fifteenth century onward. In medieval shipwrightery, these elements were still synthesized in the knowledge and skill of the master boatbuilder. 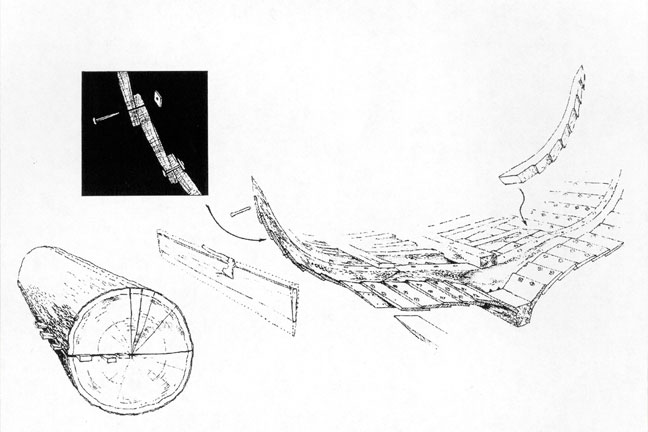 Life on board a cog would have been uncomfortable as most ships did not have a waterproof deck. Spray from the waves and rain would leak through and leave the crew soaked. Sleeping happened on deck in a sack with a big hood or on top of the cargo below. Cogs probably had a closed cabin beneath the sterncastle, but this was most likely reserved for higher-ranking people such as the skipper, navigator and merchants.

Archaeologists have found remnants of fireplaces for cooking on these ships: a wooden box on deck filled with sand and clay and closed with a slab of stone. Other finds suggest that several men of the crew would spoon porridge or stew from wooden bowls and drank beer from large pottery mugs. Bones from cattle, pigs, sheep, and ducks also indicate that animals would be carried on board.

Voyages could take seven to twelve weeks and days on the sea were long. People sat on deck, told stories, played chess or dice. Evidence for this was found in Bergen, Norway where archaeologists found chess figures carved from walrus ivory and in the Kollerup Cog in Denmark, a small dice and nine round wooden playing chips were unearthed.

Medieval people believed their destinies were in the hands of the Almighty and prayer structured their days. Sailors sang prayers when they left and also when they arrived in port. This way, they hoped to place the voyage under the protection of God.