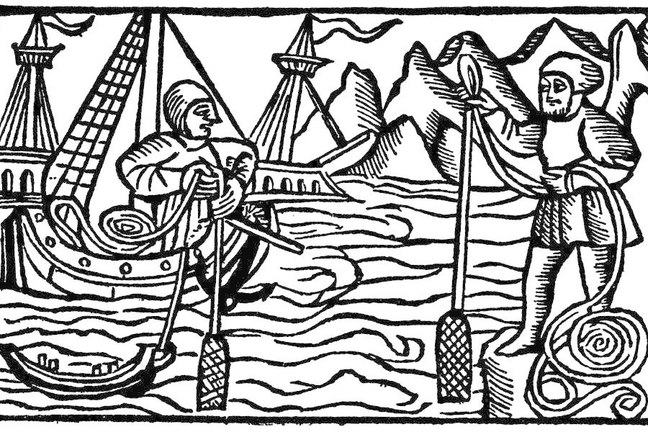 Olaus Magnus woodcut of a ship approaching the shore; a sailor is using the sounding lead (1555)

Today, skippers navigate using charts and GPS, but the medieval sailor had neither. He relied on sounding, navigational landmarks and sailing instructions learned by heart.

Only two written manuals or logs from around 1470 survive. A log would give depth soundings for a particular route, describe the characteristics of the sea-bed and list striking features such as church spires and sea-marks. The sounding-line would be used to measure depth and bring up samples of the soil of the sea-bed (See the image above). Sailors and navigators must have known the underwater landscape of their trading routes very well.

Despite their navigational skills, sailors did not always reach their destination safely. The late 13th century, for example, saw an important surge of storm-activity in the North Sea and eastern Channel region. These storms would not only have been bad news for crews at sea, they were powerful enough to impact both the coastline and the communities living there. The storms washed away villages and parts of towns, devastated small ports, and altered shipping and trading patterns. Although storms could be devastating for cities such as Winchelsea, which was completely destroyed when a series of storms hit the south coast of England in the late 13th century, they also created opportunities. Another storm in 1134 hit the Flemish coast, creating a tidal channel that reached fifteen kilometres inland. The new waterway offered access for ships from the sea to the inland city Damme, the commercial outpost of Bruges, which consequently grew to become one of the foremost port cities of Europe.

Cities in northwest Europe went through important economic developments during the twelfth and thirteenth centuries. They substantially expanded their trade-contacts beyond their previous limits and looked for new goods and the easiest ways to put these on the market. To stimulate and protect their international trade, merchants organised themselves in guilds and leagues.

In the North- and Baltic seas an alliance was forged between German merchants who worked together to transport their goods in a safer and cheaper way and to secure trade-privileges from the people in power. In the middle of the fourteenth century, this covenant of individual merchants developed into an extensive league of cities: the German Hanseatic League or Hanse. An exact date on which the Hanse was founded is unknown, it was a gradual process that took several years to develop. Furthermore, we should not think of this league as a ‘union’ like we know the European Union today. Rather we should think of the Hanseatic League as a loosely connected network of merchants, who would cooperate when called for, but ignore their duties when it was against their own personal interest.

During its peak, the Hanse united two hundred cities from areas that are known today as Germany, the Netherlands, Belgium, the Baltic countries, Norway, Sweden, Finland, Poland and Russia. In time, the Hanse succeeded in establishing intensive contacts in the Mediterranean, where primarily Arabic and Italian merchants were active. These interactions in the Mediterranean facilitated the necessary contacts between ships of the north and the south that were responsible for the changes in ship-construction ‘from clinker to carvel’ that were about to take place. 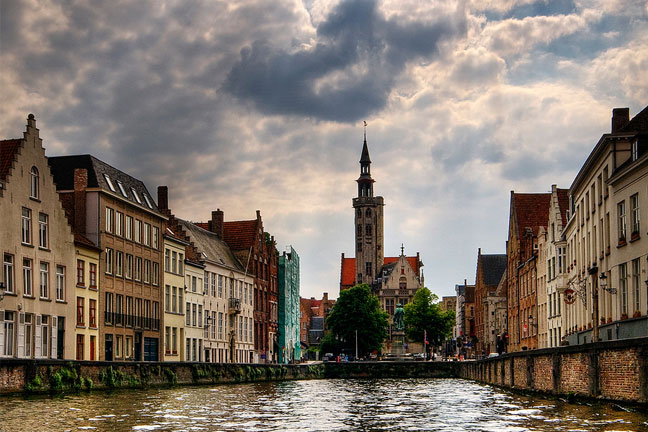 The variety of goods that was transported across the seas and exchanged owners on the market places of these cities is immense. A vivid illustration of this comes from Bruges, ideally located to function as the meeting-place for merchants from the north and the south of Europe. In 1438, the city was visited by Pero Tafur, a world traveller from Cordoba in Spain who wrote down the impression that an international trading port like Bruges left on him:

‘There [in Bruges] all nations of the world gather. […] Sure, those with a lot of money and the will to spend it, would find in this city alone what is made around the world. There I saw the oranges and lemons from Castile, as if they were fresh from the tree, there [I saw] the fruit and wines from Greece, in such abundance as in Greece itself. There I saw cloths and spices from Alexandria and the entire Levant, as if one was there. There I saw the pelts of the Red Sea [Black Sea], as if they were made there [in Bruges]. There was all of Italy with its brocade, silk and weaponry and all other things that they make there. So, there is not a thing from a part of the world of which one cannot find the best there.’

The maritime innovations of this period, herald the beginning of a global world in which the volatile dynastic powers of medieval society were transformed into larger and more coherent nation states. Because much of the political, military, and economic competition between emerging nation states was played out at sea, this process was de facto also a maritime process. It is this social change, manifested in the technological changes in shipbuilding, which maritime archaeologists study and attempt to reconstruct.