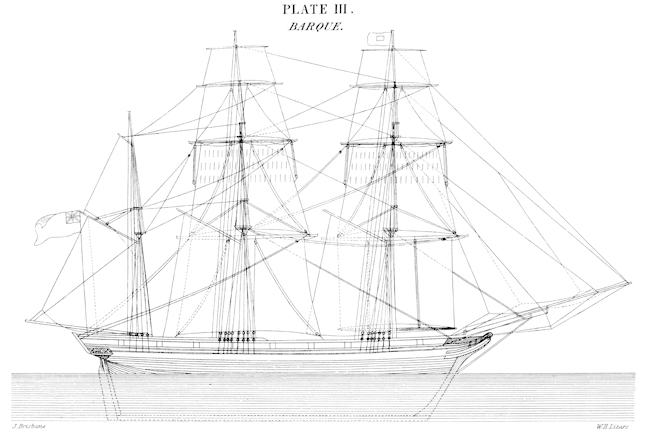 The Flower of Ugie is not recorded in any surviving images, but this diagram of a sailing barque from the mid-19th century shows a vessel that is likely to have looked almost the same. Image by Maritime Archaeology Trust.

A global trading ship lost in the Solent in 1852.

Throughout the 19th century maritime routes and connections became ever more reliable and efficient. Many of the patterns of modern trade and globalisation that we are familiar with today began to be established. There were great changes in the way that ships were built and propelled through the use of iron (and later steel) for shipbuilding, and the development of the steam engine to allow propulsion without a reliance on the wind.

Despite this new technology, many ships continued to be built from wood and propelled by sail. One of these was the Flower of Ugie that operated between its launch in 1838 and its wreck off the south coast of England in 1852 (Image 1). The Flower of Ugie reflects many of the commercial processes of the increasingly globalised world of the 19th century, alongside some of the technological changes occurring to ships and shipbuilding. 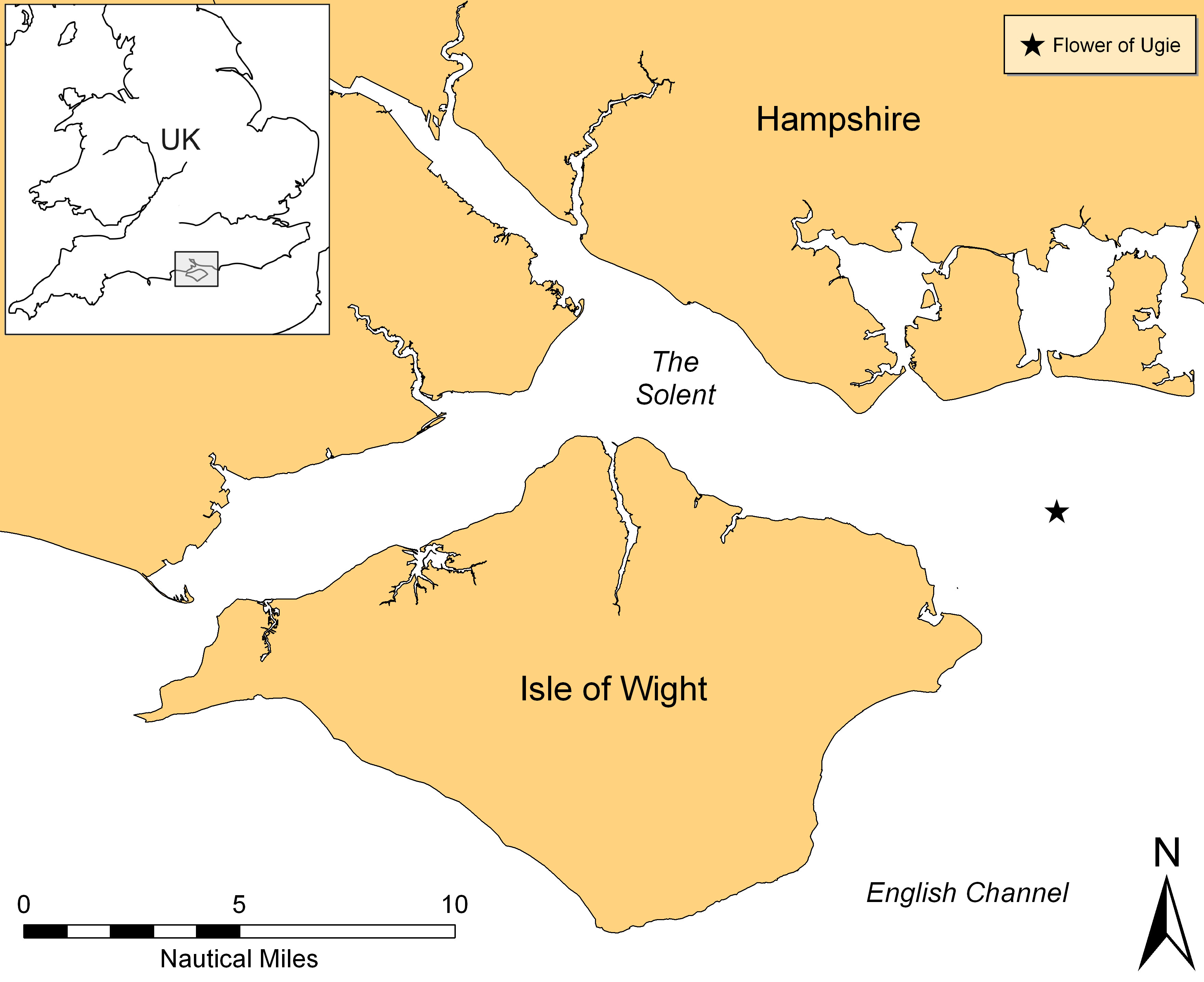 Image 1.The location of the shipwreck of the ‘Flower of Ugie’, off the south coast of England. © University of Southampton 2017

The Flower of Ugie was built in Sunderland by a shipbuilder called Luke Crown and launched in July 1838. At the time Sunderland was one of the biggest shipbuilding cities in the world and Luke Crown shipyard was one of the many dozens of yards along the banks of the River Wear. The Flower of Ugie was built from wood, as ships had been for thousands of years, but it was reinforced with iron frames and fastened together with bolts made from a copper-alloy known as yellow-metal. Both of these were still relatively new inventions in the early 19th century. The outside of the hull was sheathed in yellow-metal in order to protect the wooden planking from marine organisms during its career.

Shipbuilding timber at this time was a valuable commodity and the wood used in the ship came from all over the world: ebony from West Africa; elm from North America; pine from the Baltic and oak from England and France. The ship was surveyed by a man called John Brunton who noted in his report that the vessel was very well built. It would have received the highest rating available except that Luke Crown had used oak from France, which John Brunton did not like!

The construction of the Flower of Ugie combined new technology and industrial manufacturing with traditional methods of building wooden ships that were still in existence at the time. It also allows us to consider the growth in the international transport of raw materials that we now take for granted. The vessel was owned by a consortium of men from Peterhead in Scotland and seems to have been named after the River Ugie that runs into Peterhead harbour.

The sailing career of the Flower of Ugie is equally fascinating and began with a series of voyages between England and the Indian cities of Madras and Calcutta. One of these voyages lasted for three years between 1841 and 1844, during which time the 18 crew members were continually away from home (Image 2). On that particular voyage, the ship sailed to China, probably as part of the transport fleet engaged in supplying the British army fighting in the 1st Anglo-Chinese war. After that, it seems to have transported indentured workers from the east coast of India to the sugar plantations on the island of Mauritius. It is remarkable that in the eight years between 1838 and 1846 the Flower of Ugie only spent seven months in England. 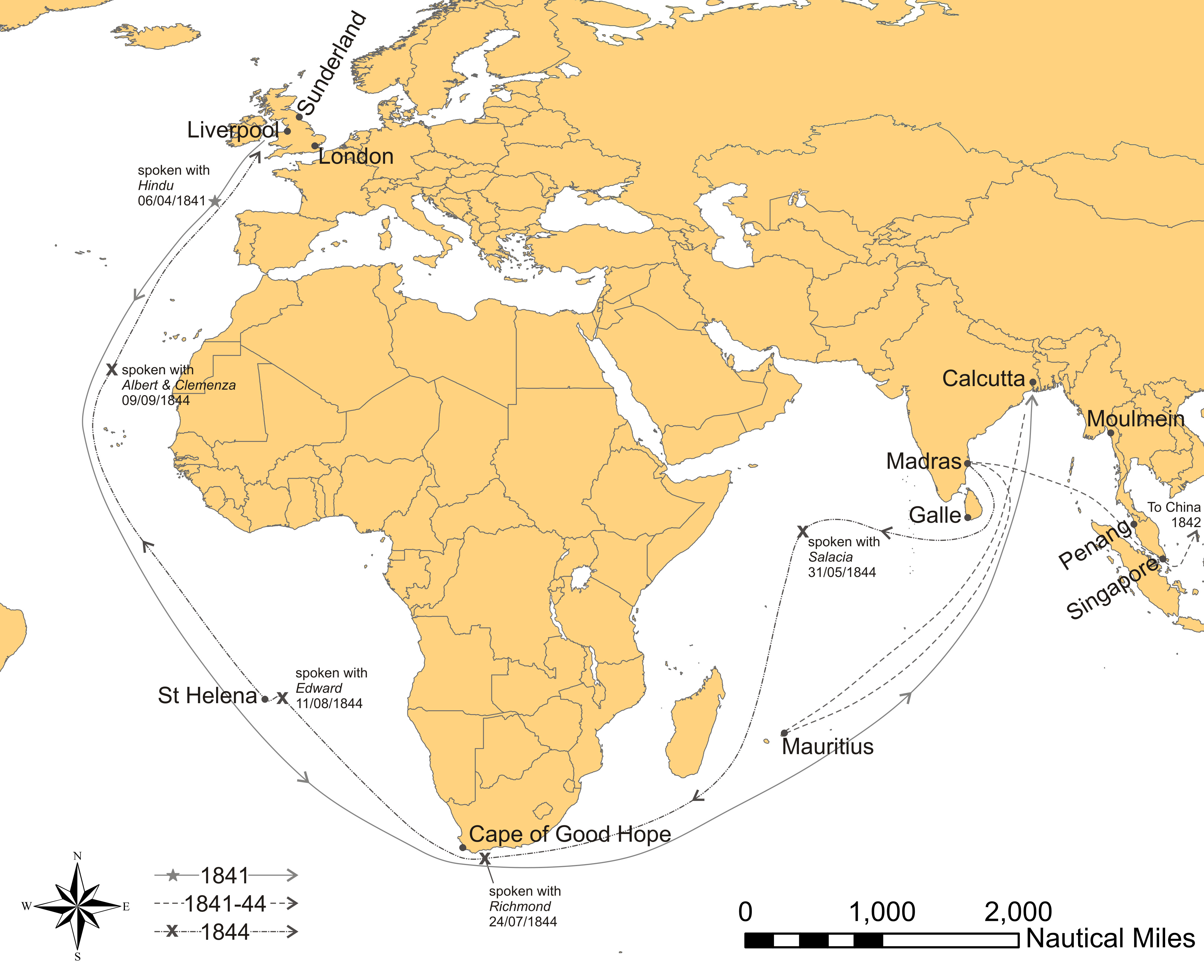 The vessel was sold in 1847 and then began a new career sailing to the Mediterranean, the Baltic, northern European ports such as Hamburg and also to North America, including New York and Quebec. The ship sailed regardless of the time of year, often undertaking voyages in the middle of winter. This is in contrast to the carefully defined sailing seasons of the medieval and ancient world when sailing was rarely undertaken during the winter months because of the increased dangers posed by the weather.

Perhaps inevitably the final voyage of the Flower of Ugie was on one such winter voyage. The ship departed Sunderland on the 7th December 1852 with a cargo of coal, bound for Cartagena in Spain. Christmas Day was spent at sea and on the 26th December the ship met a severe westerly gale in the English Channel. This resulted in the vessel being blown onto its side by the force of the wind and the crew had to cut down two of its three masts to enable it to come upright again. In desperation, the captain sought refuge in the relatively sheltered water to the east of the Isle of Wight. But with only one mast remaining and a recorded 13 feet of water in the hold (the hold was only 19 feet deep) the disabled vessel ran aground in the eastern Solent. The crew were forced to abandon ship and were all rescued by a local pilot boat. Battered by the storm and the waves around the sandbank, the vessel was smashed to pieces just hours later.

The site of the vessel was rediscovered in 2003 when a fisherman caught his nets on the upstanding timbers of the wreck. At the time, the identity of the wreck was unknown. Archaeological investigation was then undertaken by the Maritime Archaeology Trust who recorded the seabed remains and raised samples of the timber and copper-alloy to allow scientific work identifying wood species and analysing the metalwork to take place. This allowed the ship to be identified and the story of the vessel to be pieced together from the available historical sources and published alongside the archaeological material.

The Flower of Ugie was not a swift or famous clipper ship like the Cutty Sark. The vessel was a reliable, effective workhorse concerned with the efficient, predictable carriage of bulk goods. As such, the story of the Flower of Ugie is representative of the burgeoning global maritime connections of the early/mid 19th century, moving goods, people and ideas throughout the world. Critically combining archaeological remains with historical sources allows us to gain an insight into the world of the sailors that worked on vessels like the Flower of Ugie. In our modern world of rapid communication, it is hard to imagine a three-year voyage away from home with only the occasional letter as a means to stay in touch with family and loved ones. We can however begin to empathise with the day-to-day lives of the people who set in place many of the maritime foundations of our modern lives.