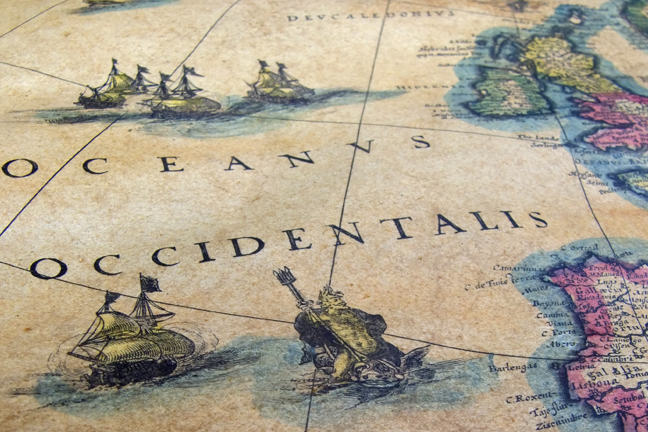 The development of the post-medieval warship

Throughout much of the medieval period in England warships were usually merchant ships borrowed by the King when there was a need to conduct naval operations. There was often very little difference in outward appearance and the emphasis, with only a few exceptions, was on transport, rather than warfare at sea. This changed with the development of gunpowder and cannons, which were quickly recognised as being a useful addition to the weaponry of a ship at sea.

Specialist vessels began to emerge once it was realised that the most effective way of using cannons was through gun-ports pierced in the hull of the ship, rather than from the decks. One of the earliest archaeological shipwrecks of a vessel of this type is the Mary Rose, lost in 1545 off the South Coast of England which had a range of different guns mounted through gun-ports on two decks.

Formal naval tactics at that time and until the first Anglo-Dutch war of the 1650s were quite limited and resembled more of a melee than an organised battle. This began to change as admirals recognised that the best way to deploy their increasingly powerful naval guns was with a full ‘broadside’ of cannons from each vessel, that were themselves arranged in a line, one behind the other. This tactic was known as the ‘line of battle’ and it continued as the main form of battle tactic for as long as ships used sails and cannons.

In order to maximise the effect of this tactic, the biggest and most powerful ships were placed at the front of the line and became known as 1st-rates, they were followed by the 2nd-rates and 3rd-rates. This increasingly organised system of deploying warships led to attempts to establish consistent standards within the design, construction and fitting out of warships. In Britain these became known as the ‘establishments’ and they specified the size of the ship alongside the number and type of guns for each rating of vessel. As naval technology developed and the requirement for different types of ships to fulfill different functions changed, the establishments were revised to try to meet new requirements.

At the same time, the strategic use of warships was beginning to change. In the 16th century, their primary use was for the immediate defence of the country and foreign expeditions of large fleets, such as the Spanish Armada were relatively rare. As the 17th century progressed, many northern European nations began to use warships as a means to project the power and prestige of the King and the state towards their rivals. The Swedish ship Vasa, lost in Stockholm harbour in 1628, is an excellent example of this.

To the west, nations like England, the Netherlands and France were using naval warfare as a means to resolve disputes between countries and protect merchant convoys from their growing overseas territories. Many of these battles took place in the Channel and southern North Sea. Naval focus began to shift further afield as foreign policy led to the need for the British to station vessels in the Mediterranean during the late 17th and early 18th century. In most cases these vessels did not have a base in the Mediterranean but returned home to Britain at the end of each season, before the weather became unsuitable for the largest ships to remain at sea.

One of the most notable of these voyages took place in 1707 when the British Mediterranean fleet, commanded by Sir Cloudesley Shovell, was returning to England. Navigators at that time did not have an accurate way to calculate their longitude while at sea, so knowing how far east or west they were was often reliant on a calculated guess, or ‘dead reckoning’. Unfortunately for Shovell’s fleet, their estimated position in the western Channel was wrong and four ships from the fleet were wrecked and lost on the Isle of Scillies, including the 1st-rate flagship, HMS Association. The disaster resulted in the deaths of over 1,400 sailors, including Shovell himself. The sites of several of the wrecks from 1707 have been located and investigated and are now protected under UK law.

A simple error in navigation had led to one of the biggest disasters in the history of the Royal Navy. Determined that such a catastrophe would not happen again, the British Admiralty launched a competition in 1714 to find a method for establishing longitude in an accurate, simple and consistent manner while at sea. The problem was not formally solved for several decades, until John Harrison successfully made watches that were accurate and durable enough to tell the time at sea without error. By comparing the time of day at a known point, in this case Greenwich in London, with the time of noon wherever the ship was an accurate measurement of longitude could be achieved.

The effects of this development have been far-reaching and are still with us today. The central meridian from which all longitude locations on the earth are measured (zero degrees) remains at Greenwich even though we are more reliant on satellites than clocks for our navigation today and international time zones are still calculated from this point.