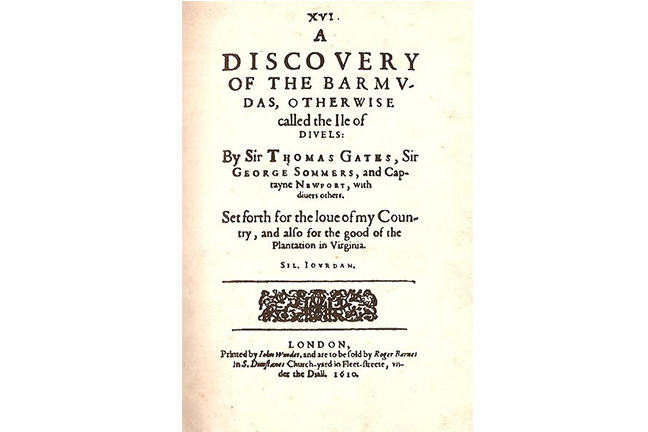 An early colonial vessel lost off Bermuda in 1609.

In 1607 England at last succeeded in establishing a permanent presence in the New World when three ships, Susan Constant, Godspeed and Discovery landed a group of colonists on the banks of the James River in Virginia. Though, for some time it looked as though ‘Jamestown’ might follow earlier English attempts to settle in the Americas into oblivion.

Just about everything that could go wrong did: a lack of knowledge and appropriate skills made it impossible for the plantation to achieve self-sufficiency. The climate was harsh, disease rife and the indigenous population were, with good reason, decidedly unfriendly. The fate of the colony hung in the balance, even with regular supplies sent from England. In response, the Virginia Company decided to mount a larger expedition to put the struggling colony on a firm footing once and for all.

So on the 2nd of June 1609, the ‘third supply’ fleet of nine vessels, left Plymouth bound for Jamestown carrying 600 souls. The largest of these ships was the 300-ton Sea Venture. As flagship she carried admiral Sir George Somers and the Governor Designate Sir Thomas Gates. Her Captain was Christopher Newport, veteran of many transatlantic crossings including the first voyage to Jamestown. Somers himself was also a veteran sailor and had commanded some of Queen Elizabeth I’s most famous ships including Vanguard, Swiftsure and Warspite.

Sailing at this time of year, the crew and passengers would have hoped for a swift, uneventful voyage and at first things went smoothly. Then luck deserted them. What happened next constitutes one of the great stories of survival at sea, and we have that story in the form of two first-hand accounts by Silvester Jordan and William Strachey (who was secretary to the Virginia Company). It is his words that best describe what happened next.

“…upon Friday late in the evening we brake ground out of the Sound of Plymouth, our fleete then consisting of seven good ships and two pinnaces, all of which from the said second of June until the twenty-three of July, kept in friendly consort together… We were within seven or eight days at the most by Captain Newport’s reckoning, of making Cape Henry upon the coast of Virginia: when on St. James his day, July the 24th,… the cloudes gathering thick upon us and windes singing and whistling most unusually,… a dreadful storm and hideous began to blow out the Northeast…”

“Swelling and roaring as it were by fits, some houres with more violence than others, at length did beate all the light from heaven; which, like an hell of darknesse turned black upon us… Six and sometimes eight men were not enough to hold the whipstaffe… by which may be imagined the strength of the storme in which the sea swelled above the clouds and gave battel unto heaven.

This was no ordinary storm. Even allowing for poetic licence, Strachey describes the howling winds and mountainous seas of a hurricane. Day and night they fought desperately to keep the ship afloat, but by the fourth day, beyond exhaustion, all hope seemed lost. It was at that moment that Sir George Somers miraculously sighted land. Somers and Newport probably knew at once what that land must be, but to the seamen aboard the euphoria of a miraculous escape from death was soon tempered by the realisation that this was the dreaded Bermudas. At that time Bermuda was uninhabited and known as the ‘Isle of Devils’ on account of it being wracked with storms, haunted by evil spirits and surrounded by treacherous reefs. But Newport had no choice and cautiously steered for the shore. He managed to get the ship to within three quarters of a mile before she struck. Fortunately Sea Venture had driven into a V-shaped cut in the reef that held the ship fast, and in moderating weather, the whole company was safely ferried ashore.

Far from being a place of evil, the castaways found Bermuda to be the place we know today, an island of plenty, basking in a benign sub-tropical climate and affording a far healthier existence than awaited them in Jamestown. This was not lost on the castaways and many wanted to stay where they were! But the colonial zeal of Governor Gates prevailed and after ten months on Bermuda, all but two men sailed for Virginia in two small ships, Deliverance, and Patience, constructed partly out of native cedar and partly of material savaged from Sea Venture. Those two who stayed ensured Sea Venture’s arrival marks the beginning of the permanent habitation of Bermuda.

Deliverance, and Patience successfully made Jamestown, arriving to the general amazement of those who had given them up for lost. What Gates and Somers found was appalling. The settlement was in such desperate straits that Gates decided to abandon it and return to England. It was only the fortuitous arrival of Lord Delaware, the next Governor that forestalled them. From that moment the colony’s future became more and more secure.

Later that year Jordan’s and Strachey’s account of this dramatic ‘wreck and redemption’ reached England and were passed around the backers of the Virginia enterprise. One of them was Henry Wriothesley, the Earl of Southampton who was also patron to William Shakespeare. It was presumably through Wriothesley that Shakespeare either got to see these ‘repertories’ or at least learn of their contents, for the very next year (1611) he wrote ‘The Tempest’.

The similarities between Sea Venture’s story and ‘The Tempest’ are striking. The play opens with a violent storm at sea conjured by the wizard Prospero after which the ship’s company are also cast ashore on an enchanted island. In the storm Prospero’s sprite Ariel ‘flames amazement’ and terrifies the crew, evoking Strachey’s account of the appearance of St Elmo’s fire on the rigging of Sea Venture. Nor would the audience have missed the parallels between the castaways of the play and European colonists on the one hand and the repression of indigenous peoples, for whom Caliban is a metaphor, on the other. In these ways the play indicates the significance of these early colonial ventures, not simply in terms of their commercial potential but in their national and ideological importance in an increasingly global world of first contact with other cultures.

What of the ‘Tempest wreck’ itself? Lodged on the reef, the castaways had been able to go back out to the site and strip off much of what they needed to build their new ships. Finally the hull broke up and sank to the bottom. Astonishingly she was rediscovered in 1958 by Edmund Downing, an American descended from George Yeardley, Sea Venture’s Captain of Soldiery. Unable to research full time, Downing agreed the Bermuda Government should employ Teddy Tucker to excavate the site and confirm the identification.

Everything pointed to Sea Venture except a gun which was dated to the eighteenth century. This was perhaps why the project lost momentum, until many years later when the site was reinvestigated by the Bermuda Maritime Museum under Allan ‘Smokey’ Wingood. Wingood’s team not only recovered additional material closely dated to Sea Venture’s time, but the offending gun was reassessed as seventeenth century after all. Pottery from the site was identified by Ivor Noël Hume as ‘West of England’, a type he was finding on the lost plantation of ‘Martin’s Hundred’ in Virginia. He also found the whole assemblage perfectly consistent with an English ship of the period, as opposed to those of other nations.

Subsequent archaeological research by the Sea Venture Trust has revealed stratified deposits containing structural, artefactual, and environmental material. Her hull remains preserve much information on early seventeenth century timber conversion, hull design, and construction. All indicate an English vessel very near the “300 tunnes” given in contemporary accounts. The assemblage makes a significant contribution to the early history of Bermuda, and also to wider issues underlying the design and use of ships, and related changes in society.

The Sea Venture archive is contained in the Bermuda Maritime Museum, where there is a permanent display.