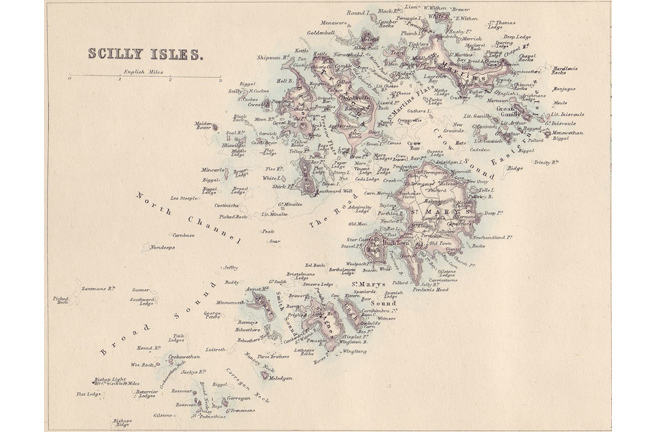 An old map of the Isles of Scilly

While many discoveries in maritime archaeology are made by professional archaeologists, the world is a big place and avocational archaeologists (people who have an interest in archaeology, but do not make their living doing it) make many important contributions to the field. A good example of this the on-going work being done by the Cornwall and Isles of Scilly Maritime Archaeology Society (CISMAS) on the shipwreck of the HMS Colossus.

HMS Colossus is a 74 gun, wooden post-medieval warship that was wrecked in a gale off the Isles of Scilly, UK in December 1798. It was extensively salvaged, both legally by the Admiralty shortly after the wrecking and illegally by many parties, including the Deane Brothers in 1833. The site was rediscovered in 1975 and designated a protected wreck under the Protection of Wrecks Act. The bow section of the site was excavated between 1975 and the early 1980s by Roland Morris and the British Museum. Subsequently, the site was de-designated when the majority of the pottery from the site was reported removed.

In 2001, local divers discovered exposed timbers and iron guns in an area to the east of the de-designated site. Along with the subsequent discovery of a beautifully carved human figure, identified as a quarter piece from the stern of a ship, the new site was designated as a protected wreck. Local divers were given a survey licence in order to record the site and designated the site Licensee by English Heritage. A Licensee is a voluntary role that allows local people with an interest in maritime heritage to work directly on protected wreck sites, liaise with other local divers to form project teams and write reports to assist English Heritage with management programmes. Licensees work with a nominated archaeologist to develop project designs and research the site.

The site’s Nominated Archaeologist, Kevin Camidge, conducted a photosurvey and measurements of the site. It quickly became obvious that the shifting sands at the relatively shallow 15m site was causing more timbers and artefacts to be uncovered and that these well preserved remains were noticeably degrading with exposure. More work was needed.

The Cornwall and Isles of Scilly Maritime Archaeology Society (CISMAS) was formed in 2004 as a direct result of the increase in interest in local maritime archaeology. The society currently has over 100 members with approximately 75% of its membership being qualified divers. The first project that CISMAS worked on was a two-year survey of the debris field around HMS Colossus, funded by the Heritage Lottery Fund.

Subsequently, English Heritage funded a site stabilisation trial and further recording of the site between 2003-2005. The result of this trial was the protection of a small portion of the stern site in 2008 by geotextile covering, enabling CISMAS to continue to monitor the site and quantify the level at which the site is degrading.

In 2009, English Heritage funded the installation of a dive trail on the site. This series of observational stations, established at key points of interest, allows divers to follow an interpretive waterproof booklet around the site. Access is provided with permission by local dive charter boats, all of whom have copies of the underwater booklets.

The revised 2007 English Heritage Final Management plan on the site refers to the local community as the “unofficial custodians” of the site citing their on-going keen interest and self regulation of recreational diving on the site, investigation and monitoring programmes. It also mentions the local education value of interpretive material held at St. Mary’s Museum and wider educational activities available online.

The re-designation of HMS Colossus, discovery of the stern section and associated artefacts, stabilisation monitoring and dive trail would not have been possible without the dedicated work of local avocational archaeologists. The result is a winning situation for everyone involved. Through working with English Heritage, Wessex Archaeology and local archaeologists, volunteers with CISMAS are able to directly interact with local heritage and strengthen the modern connection with HMS Colossus and the Isles of Scilly. Through their work, our knowledge of the eighteenth century naval ships as well as more practical site stabilisation methods has been greatly improved. This collaboration between professional and avocational organisations continues to be a illustrative that “avocational” does not always mean “amateur”. The potential for excellent archaeological excavations and research is not dependant on professional status, but rather the ability for researchers of all backgrounds to work together.