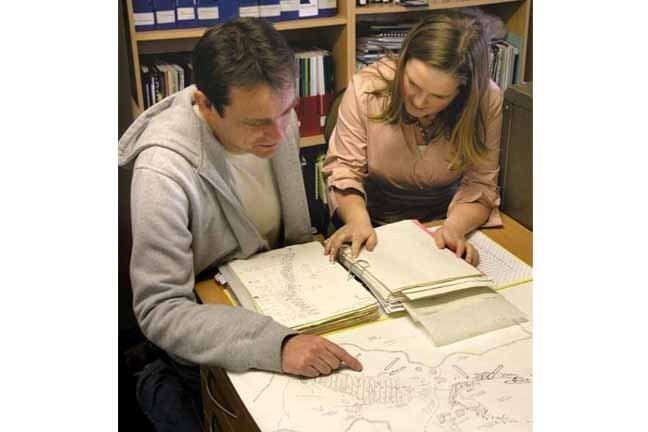 The previous article discussed ‘preservation in situ’ and the tension between this underlying ideal and the often-destructive processes of archaeological investigation and excavation.

Archaeology’s response is to record everything meticulously: to take multiple samples, conserve and record artefacts, to photograph and draw site plans, to video and survey sites before, after and during excavations, and to compile, catalogue and keep all this data as a record of the site.

The records, samples, photographs, artefacts and digital data we produce during an archaeological project are an ‘archaeological archive’. For maritime archaeology, these archives are particularly important. Most people will never be able to access underwater maritime sites and archives are, therefore, the primary means of public access to this important heritage.

What is an ‘Archaeological Archive’?

An archaeological archive comprises all records and materials recovered during an archaeological project and identified for long-term preservation, including artefacts, ecofacts and other environmental remains, waste products, scientific samples and also written and visual documentation in paper, film and digital form.

One of the key differences between archaeological and historical archives is that archaeological archives are created with the intention of maximising future research potential. We know that many of our research methodologies will damage a site and our archives are the means through which we try to preserve as much of the context and evidential relationships as we can. So we plan, photograph and record everything – some might say obsessively – so that any future researcher can navigate the data, samples and artefacts in the archive to reinterpret or further develop our understanding of the site. We know that there may be new and better methods to interpret geophysical data or ecological samples in the future – or that future archaeological investigations may mean a site needs to be re-evaluated at a later date.

There are agreed professional standards for planning, creating, depositing and then curating archaeological archives:

As part of planning an archive, we also develop careful ‘selection and retention strategies’ to decide which environmental samples and materials from the site we need to keep for the future.

The idea that archaeologists may chose not to keep every artefact found on a site might be surprising – but artefacts like tiles, house bricks, bottles or even clay pipes can be found in great numbers on particular kinds of sites. Archaeologists will often keep a representative sample of these kinds of objects and ‘disperse’ others to teaching, museum handling or reference collections.

In maritime archaeology, the idea of ‘dispersing’ any of the artefacts from an underwater site is very unusual. This is in part because the assemblages from both shipwreck and submerged prehistoric sites are comparatively small and there are far few underwater excavation projects around the world. There is a growing debate, however, about the problem of long-term conservation and curation of recovered ship timbers and large pieces of hull structure, particularly when an excavation is in advance of dredging or other development work and the timbers cannot be preserved on the seabed. This is an emotive and contentious topic among archaeologists.

The ship halls of museums like the Vasa, Mary Rose or the Batavia gallery at the Western Australian Museum are incredibly impressive and evocative heritage attractions. But there are limits to the public appetite and resources for ship museums or ship galleries. With increased underwater archaeological investigations in advance of development projects, this discussion is likely to hot up across the world in the coming decade.

For more information on this discussion, see the ‘Preservation by Investigation’ section in the Advanced Reading

It’s key that an archaeological archive is ‘stable’ if it is going to survive for future researchers. This means artefacts need to be conserved. Archaeological conservation of waterlogged artefacts from underwater sites is an amazing science (with enough interest to fill another course!). There are often delicate organic materials in these assemblages, as well as the potential impacts of objects drying out, and the work of specialists is required to stabilise everything from timbers to cannon and leather shoes.

‘Stable’ might seem a strange term to use about documents, photographs or geophysical survey data, but these also require curation. Establishing the right form of digital archiving and long-term curation of ‘big data’ is, for example, one of the key future challenges for maritime archaeology.

Perhaps the most important part of managing an archaeological archive is ensuring that its long-term curation, security and accessibility. That means, in practice, finding a public museum or repository that will hold and curate the archive in the long-term.

For maritime archaeologists, this can be more complicated than you might expect. In England for example, it might surprise you to find there is no national maritime museum that will take archaeological archives (the National Maritime Museum at Greenwich is now focused on historical material and the artefacts it already holds). Trying to find a secure and accessible location for a maritime archive can be very difficult. However, this isn’t true across the whole of the world, or even across the whole of the UK (Scotland has a different system).

Can you tell us anything about the maritime archaeological archives in your part of the world?

Despite our professional standards and the best intentions of archaeologists, many maritime archaeological archives are difficult to do research on and in. Important or well-known shipwreck sites have often been investigated by different teams over a number of decades. So if you are interested in doing research on a particular site, it can be quite a detective process to identify where different parts of the archive are in the first place.

As a result of these historical legacies, and the fact that for many underwater sites the closest a member of the public will get to a site is through its archive, new and innovative ways of curating and making maritime archaeological archives available are being developed. In the UK, the Maritime Archaeology Trust has developed an interactive archive for HMS Invincible.

Many archaeologists are embracing the possibilities of digital reconstructions and visualisations to make sites accessible to the public. There are a number of fantastic digital tours of shipwreck sites, which have been developed from the data held in archaeological archives, but making a full archaeological archive accessible online is still a very new idea – and quite difficult.

If you know of any projects that are doing this (whether they are doing it well or badly!), we’d love to hear from you in the discussion below.

A final word about historical archives and ‘shipwreck archives’

Many of the shipwrecks and sites we’ve discussed so far on the course have been investigated both underwater and in historical archives and public records offices. The Flower of Ugie is a prime example of the importance of historical research alongside archaeological investigation.

There are also a number of fantastically useful ‘shipwreck archives’ or wreck databases around the world (e.g. Shipwrecks databases Western Australia Museum or Bureau of Ocean Energy Management Shipwrecks off Alaska’s coast). These are, more or less, detailed (and reliable!) records of shipwrecks and reported ship losses most often compiled from historical sources. If you are trying to identify a site they can be very useful – but they are also very easy to get lost in!